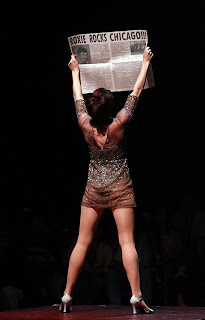 There’s lots of razzlin’ and dazzlin’ going on in Sacramento, as Music Circus closes out its 2013 season with its first-ever production of the Kander & Ebb & Fosse salute to vaudeville, “Chicago.”

The story is based on a 1926 play called “Chicago” by Maurine Dallas Watkins, a journalist who covered the real-life sensational murder trials of the era. Watkins’ story described two women accused of murder, whose defense was that they had been the victim of unscrupulous men.  It’s the sort of thing that Chicago tabloid journal readers ate up. Bob Fosse took the theme and ran with it.

From the moment muscle-bound announcer Aaron Felske sashays onto the stage to so many cat calls and whoops from some of the females in the audience, and the company starts the familiar “All that Jazz,” the sizzle never stops.

Structured like a vaudeville show, acts such as one would see in a real vaudeville show (the ventriloquist, a clown, and some others I’ll save for the surprise), the show hangs on the story of young Roxie Hart (Lindsay Roginski), who murders her lover, manages to get acquitted at her trial, thanks to the help of attorney Billy Flynn (Tom Hewett) and then capitalizes on her 15 minutes of news media fame to build a career for herself on the stage with chanteuse and former prison mate, Velma Kelly (Brenda Braxton).

Roginski is a luminous Roxie.  Her facial expressions, her beautiful body lines in freezes make it impossible to take your eyes off of her.  You somehow forget that she is a heartless woman who cares only for herself and doesn’t care whom she hurts in her attempt to get to the top.

Hurt most of all is husband Amos (Rick Stoneback), hopelessly in love, willing to believe anything, to forgive anything and yet hurt by Roxie over and over again.  Amos’ song “Cellophane” is always a highlight of this show and was again in this production, though I found it lacked the depth that I have seen in other productions.

Hewett’s Flynn is slippery, sleazy and not very likeable, though he certainly knows how to “Razzle Dazzle” everyone to get the desired outcome for his clients.

Braxton is a sultry songstress who knows how to belt a tune and is delightful in the “Cell Block Tango,” where each of the “merry murderers of the Cook County Jail” describe how they came to realize that their victims had to die.  “He had it coming / He had it coming / He only had himself to blame / If you'd have been there / If you'd have seen it / You would have done the same.”

Roz Ryan is outstanding as Matron “Mama” Morton, who runs the prison with an iron fist, but treats her favorites with loving attention (“When You’re Good to Mama”)

Choreography for this show is by Randy Slovacek, who gives us credible Fosse-esque dancing without resorting to mimicry.  This is a large show and Music Circus has a small stage, yet somehow you still get the oomph of this Fosse-like choreography.

“Chicago” has an extended run, to August 29, but it was a near sell-out on opening night and one assumes that word of mouth might make tickets more difficult to find.

This was a perfect show to close out a stellar season.
Posted by Bev Sykes at 4:21 PM