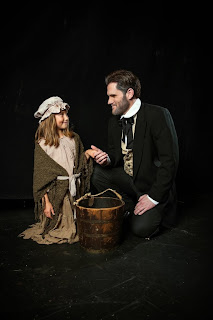 When “Les Misérables” closed on Broadway in 2003, after 6,680 performances, it was the second longest-running Broadway musical after “Cats.” It was surpassed in 2006 by “Phantom of the Opera.”

This is a big musical that tells a big story and it is beloved by millions.
The Woodland Opera House, with its current production under the direction of Amy Shuman with musical direction by James C. Glica-Hernandez, proves that with competent attention, it can be as effective and as moving on a smaller stage. The production gets a well-deserved standing ovation.

One of the first striking things about this production is that while it is generally difficult to get enough men with strong voices to fill out a chorus in community theater, this production has a dozen or more men and each one has a principal-quality voice. It makes a huge difference in the final product.

Tevye Ditter, whose progress I have been pleased to watch over the years, is a powerful Jean Valjean, the man arrested for stealing a loaf of bread to feed his starving nephew and served 19 years at hard labor. He is big and strong and has a potential for violence, yet he is tender in his relationships with the women in his life, from the prostitute Fantine (Danielle DeBow) to her young daughter Cosette (Makenna Harding-Davis as the child, Alyssa Ray as the young woman). His “Bring Him Home,” praying for the safety of his daughter’s love, Marius, was achingly poignant.

J. Sing is Javert, the police officer obsessed with returning Valjean to prison. I’ve never understood Javert’s obsession, but it makes for good theater. Sing is every bit the match for Ditter and his solos, especially the soul-searching soliloquy, were captivating.

DeBow’s Fantine, a small but memorable role, was touching, as she gives up everything for her young daughter. Her “I Dreamed a Dream” is always a highlight of this musical, and DeBow was equal to the task.
Six-year-old Harding-Davis was a charming young Cosette, certain to win everyone’s heart with her “Castle on a Cloud.”

Her older counterpart, Ray, was lovely and touching in her love for Marius Pontmercy (Dalton McNeely). McNeely, last seen as Charlie Brown in the summer production, was appropriately awkward in his first love, ardent in both his love for Cosette and dedication to the student revolt.

Innkeepers Thenardier (Dan Sattel) and Madame Thenardier (Christine Deamer), the sadistic foster parents of young Cosette, offered the lighter moments with their funny “Master of the House,” always an audience favorite.
Hilary Wells was Eponine, daughter of the Thenardiers, whose love for Marius is unrequited, yet she is willing to give her life for him. Her “On My Own” was beautifully performed.

Rodger McDonald plays the small role of the bishop who, by his generosity and guidance, changes Valjean’s life.

Fourth-grader Maxwell Freedman was outstanding as Gavroche, the young boy who hangs around the students as they plan their revolt. Freedman’s pugnacious body language and the determined scowl on his face never wavered and without doing anything specific, he was a scene stealer just by his presence on stage.

There are 12 musicians in the Opera House orchestra for this production, under the baton of Glica-Hernandez, and they gave the musical the full sound that it needs.

Sadly, costumer Denise Miles was left out of the program, but there is no denying that the costumes on stage were beautiful, from the tattered outfits of the prostitutes to the finery of the guests for the wedding of Cosette and Marius. However, I question the appropriateness of some of the clothes, such as the white vestments for the Bishop (white is reserved for the pope), and the perfectly tailored clothing for the students, who looked more like businessmen on a tea break than poor students hoping to send a message to the government about the dire plight of the poor of Paris. I also wonder whether Javert would wear a top hat while on duty.

This production is a real gem and, based on the nearly full house when I caught it the second weekend, word of mouth is already spreading. Don’t miss it!
Posted by Bev Sykes at 9:55 AM