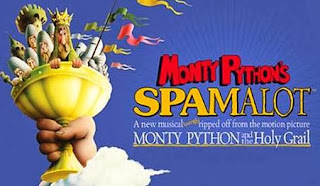 There is a whole lot of silliness going on at Davis Musical Theatre Company … and the audience is loving it.

With book and lyrics by Eric Idle and music by Idle and John DuPrez, “Spamalot” is a musical comedy lovingly ripped off from the 1975 film, “Monty Python and the Holy Grail.” While it is very, very loosely based on the story of King Arthur and his court, factual information probably stops with the entrance of King Arthur himself.

I wondered if someone who was not brought up on the comedy of the zany British group Monty Python would get most of the humor. I need not have worried. I’m sure there were “in” jokes that the Python devotees got that I didn’t, but the humor flies at you so fast and so furious that you don’t really miss anything.

Before seeing the show, I read a synopsis and found that useless. The sense of it — if there is any — rests in the twisted mind of Idle, the Monty Python members who wrote the original film, and the “12-year-old Jew” (his description) who directed it, Steve Isaacson.

Where to begin? Well, the show starts with a very proper Historian (John Haine, also hilarious as “Not Dead Fred”) setting the stage for the action, with map pointer like a proper weatherman. (“In Guinard, Palace and Difford, plague. In the kingdoms of Wessex, Sussex, Essex and Kent, plague. In Mercia, and the two Anglias, plague, with a 50 percent chance of pestilence and famine coming out of the northeast at 12 miles per hour.”)

Following his announcement that this is “England,” the stage is filled with brightly costumed dancers singing about Finland and hitting each other with fish in the delightful “Finland/Fisch Schlapping Dance,” until the historian reminds them that it is England, whereupon they leave the stage, disappointed and the scene becomes a dark, solemn church-like setting, with monks in robes and hoods chanting.

This pretty much sets up the series of vaguely related vignettes — based on Python sketches — that are to follow.
The story itself begins with the arrival of King Arthur (Scott Minor), trotting in on an invisible horse, whose hoofbeat sounds are made by coconuts worn by his trusty servant and constant companion, Patsy (Joshua Smith), which he beats on his chest. Arthur is the one character who attempts to remain serious about this silly story and Minor plays him beautifully, never noticing the total chaos around him and insisting that his only desire is to find knights for his round table to assist him in finding Christ’s cup from the Last Supper (the Holy Grail). Piece o’cake.

The knights — Sir Robin (Tony Ruiz), Sir Lancelot (Scott Daugherty), Sir Galahad (Andy Hyun) and Sir Bedevere (Steven Ross) — each play an assortment of roles. Ruiz gets to perform the delightful salute to Broadway, about the importance of Jews to Broadway musicals.

Daugherty is the “knight who really likes his night life” and is hiding a not-too-subtle secret.

Hyun goes through a “Project Runway”-like hair makeover, taming his electric tresses, and sings a salute to Andrew Lloyd Webber (“A Song that Goes Like This”) with the Lady of the Lake (Eimi Taormina).

Taormina gets to wear a succession of beautiful costumes, designed by Jean Henderson, ending with an ingenious wedding dress (by Valtyna Ribka) that must be seen to be believed. (She also has a spectacular decolletage.)
Michael Paskowitz is a towering Leader of the Ni Knights, but it is Dannette Vassar as Mini Ni, who makes the biggest impression.

Mark Deamer is Tim the Enchanter, who warns Arthur of the dangers of an evil rabbit (wrangled by Julia Thompson), prompting the use of the Holy Hand Grenade of Antioch.

And so it goes, a host of wacky characters including Eric Idle himself as the Voice of God (who else?).
Choreography by Cyndi Krivicich is outstanding and the DMTC orchestra, under the direction of Jonathan Rothman, was never better.

When asked in a 2008 interview for his opinion about “Spamalot,” John Cleese said, ” I think ‘Spamalot’ turned out splendidly. It’s had a tremendous run. I defy anyone to go and not have a really fun evening. It’s the silliest thing I’ve ever seen and I think Eric did a great job.”

DMTC does a great job, too, and if you’re in the mood for silly, this is the shop for it!
Posted by Bev Sykes at 6:21 PM