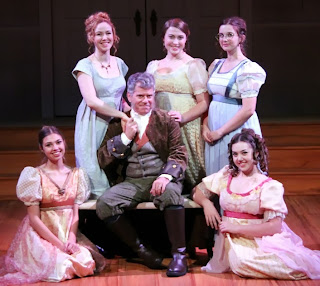 Published in 1813, Jane Austen’s “Pride and Prejudice” remains one of the most popular novels in English literature and usually can be found in the top 10 lists of “most beloved books.”

What better way for Sacramento Theater Company to celebrate the 200th anniversary of the publication of Austen’s novel than to mount an adaptation of the story by Joseph Hanreddy and J.R. Sullivan, directed by Michael Stevenson. It is currently on the main stage, the first in STC’s “Season of Adventure, Rhythm and Romance.”

The new production sparkles with the excitement of the five adolescent daughters of Mr. Bennet (Matt K. Miller) and Mrs. Bennet (Jamie Jones), each looking for the perfect mate. (“It is a truth universally acknowledged, that a single man in possession of a good fortune, must be in want of a wife.”) They are all positively giddy at the notion of handsome young Mr. Bingley (Matt Surges) moving in next door (“next door” being a relative term, since it is a 3-mile walk).

Jones dominates as the social-climbing matron, determined that her daughters should marry well and keep her from the poor house in the event of her husband’s untimely demise. She gives a very funny performance and ricochets easily from overbearing wanna-be mother-in-law to attacks of the nerves when things aren’t going quite the way she expects them to.

As Mr. Bennet, Miller is sardonically patient with his emotionally flighty wife, obviously head over heels in love with his daughters, and a doting if teasing father who is the solid center of the family.

Brittni Barger is 20-year-old Elizabeth, the second-oldest daughter, around whom the plot revolves. She is intelligent, attractive and honorable, but quick to judge people at first appearance. Barger delivers a delightful performance, though her high-pitched, rapid-fire British accent is sometimes difficult to understand (a condition that afflicted most of the women in the cast, with the exception of Tara Henry, as Elizabeth’s cousin Charlotte Lucas).

Ryan Snyder is Mr. Darcy, one of the most appealing, unapproachable heroes of classic British literature. He is aloof, withdrawn, arrogant and unwilling to mingle with those he believes are his inferiors (“She is tolerable; but not handsome enough to tempt me …”). Snyder is such a perfect Darcy that his ultimate admission of his feelings for Elizabeth in the end bring relief to nearly every woman in the audience.

Elizabeth’s older sister, Jane, is played by Rebecca Scott. Jane is the most beautiful girl in the neighborhood, though not as saucy as her younger sister, and was once described by journalist/author Anna Quindlen as “sugar to Elizabeth’s lemonade.” She has an off-again, on-again relationship with the wealthy Mr. Bingley (Matt Surges), mostly because of the discrepancy in their ranks. In the end, of course, love conquers all.

Brent Bianchini is Mr. Wickham, a longtime friend of Mr. Darcy, who appears charming and desirable, though his duplicitous nature is eventually uncovered.

John Lamb gives an outstanding performance as Mr. Collins, Mr. Bennet’s clergyman cousin and heir to his estate. He is “not a sensible man, and the deficiency of nature had been but little assisted by education or society.” A self-absorbed man, he is deliciously slimy and Mr. Bennet’s relief at Elizabeth’s rejection of Collins’ proposal is understandable. Collins ultimately marries Charlotte, who does not love him, but marries him for financial security.
The younger Bennet girls are double-cast and were played on opening night by Lily Rushing (alternating with Julia Fisk) as Kitty, Tori Johnson (alternating with Bella Coppola) as Lydia and Ally Boulas (alternating with Arcadia German) as Mary.

Kristine David is Mr. Bingley’s snobbish sister Caroline, herself attracted to Mr. Darcy, and trying to thwart any affections he may harbor for Elizabeth.

Costume designer Jessica Minnihan has created a beautiful collection of sherbet-colored gowns that complement each other beautifully and make a lovely visual.

Hanreddy and Sullivan have succeeded in the difficult task of moving a popular classic novel to the stage, keeping most of the characters intact and remaining faithful to the tone the author intended. Fans of this story will not be disappointed and will, in fact, be enchanted with the Sacramento Theatre Company’s vision.
Posted by Bev Sykes at 10:24 AM