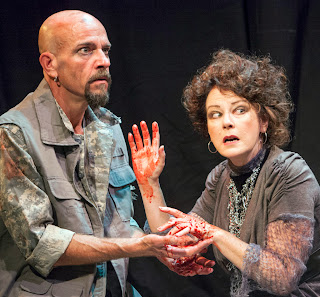 Something wicked this way comes.

This study of a descent into madness — brought on by greed and ambition and fueled by a few murders and lots of blood dripping onto the stage — is directed by Stephanie Gularte.

The setting for this show is described a “a homeland, 13 years after a devastating global war,” so guessing the approximate year is useless, but the costumes (by Rachel Malin) probably could be found at some survivalist store today (though apparently in this global war, all weapons of mass destruction have disappeared, since all weapons in this production are swords and daggers).

Gularte has a superb cast headed by the Bryan Cranston look-alike Scott Coopwood, as the title character. It took a bit mental adjustment not to see Coopwood as the “Breaking Bad” anti-hero, Walter White, playing the role.

Coopwood’s performance was extremely powerful throughout which, in spots, may have worked against him, as some nuance seemed to be lost in the performance. His angst over the prospect of killing of the affable King Duncan (Harry Harris) was less understandable in such a powerful, ambitious character, though his later descent into madness as his power-hungry killing spree begins to weigh heavily on his soul was decidedly believable.

Janis Stevens gives it her all as Lady Macbeth. She can be as heartlessly cruel toward her enemies as she can be lustily passionate with her husband. It was a shame that her soliloquy is truncated in this production. (I missed all the perfumes of Arabia.) This Lady Macbeth is more violent than we have come to expect, as it is she who joins with other assassins to kill Macduff’s (Shaun Carroll) pregnant wife (Jessica Chisum) and it is that death about which Lady Macbeth soliloquizes, not the death of the King. (“Who would have thought the woman to have had so much blood in her.”)

A bit of miscasting was Chisum’s second gender-bending role, that of Macbeth’s general, Banquo. While Chisum gave a good performance as the scrappy young woman, fighting at Macbeth’s side, it stretched credibility to think that this young woman’s children would be a threat to Macbeth, as prophesied by the three witches (called “dark figures” in this production).

She would first have to hang up her sword, start dating, find a nice young chap, settle down to domestic bliss and start popping out babies. The threat from Banquo would have been more believable had she been a man, possibly with a family at home.

Their dialog was also truncated so that the story they tell, which dictates the direction of the play, was difficult to follow. I also missed the recipe for the witches’ brew (eye of newt and all that), surely a grisly desired inclusion in a Halloween show!

Dan Fagan, as King Duncan’s son Malcolm, wore the mantle of “king” well, following the death of Macbeth (an act so shocking it should satisfy the most blood-thirsty audience member, and did cause a few audience gasps when it occurred).

Jonathan Williams is credited for fight choreography, and has created very convincing battles. That they could be so convincing in such a small area, so close to the audience, speaks volumes about Williams’ credentials.

Malin’s costumes were appropriate to the post-apocalyptic period, but there were a couple of standouts, particularly a beautifully draped jacket for Lady Macbeth.

If you’re looking for blood and gore this Halloween, this is definitely the shop for it.
Posted by Bev Sykes at 9:19 PM