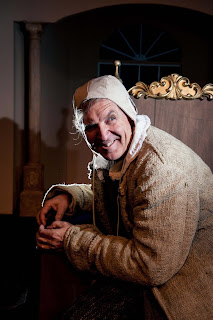 The Woodland Opera House’s Rodger McDonald has directed a production of Moliere’s farce, “The Miser,” and wisely cast himself in the title role. This is the kind of role that McDonald does so well, and once again shines in this production.

Harpagon is a penny-pinching irascible old skinflint fixated on his fortune and may well have been the inspiration for such characters as Scrooge McDuck, Oliver Twist’s Fagin, and Jack Benny. He has money hidden all over his house and has buried some of it in the garden and spends all of his time skulking around, afraid that someone will discover his hiding places.  He insists that banks are not to be trusted (hmmm...)

Supporting McDonald is a uniformly talented cast including Matt Wieringa as Cleante, Harpagon’s style-conscious son, in love with the neighbor Marianne (Jen Smuda-Cotter), whose only fault is that she comes from a poor family and has a sick mother, and thus is no fitting bride for his son, according to Harpagon, though he fancies the comely maid himself.

In the meantime, Cleante’s sister Elise (the captivating Sara Matsui-Colby) is in love with Valere (Matt Taloff in an outstanding performance), who has taken a job as stewart to Harpagon in order to be near Elise. But Harpagon has plans to marry his daughter off to a wealthy man of his own choosing, Seigneur Anselm (Steve Mackay).

The action picks up when Harpagon announces he plans to marry Marianne immediately, but assistance comes in the person of the match-maker Frosine (Analise Langford) whose quick thinking helps to smooth things over.  Langford has some of the funniest lines in the play (“What’s the point in marrying an old man if widowhood was not in the marriage contract?”)

Through it all, Harpagon is focused on keeping track of his money and when some of it disappears, he demands that everyone be arrested, those in the house, in the town, in the suburbs, and even in the audience, as he breaks the fourth wall to accuse members of the audience of being in on the plot to rob him.

It’s a fast-moving, convoluted plot that is only resolved by discovery of heretofore hidden blood lines linking some of the members of the cast.

Even before the story begins, the audience is in for treats by the “zanies,” masked figures who act as clowns (and later become characters within the play, and then back into their zanies attire again).  Director McDonald explains that these are “the spirits of drama originating from Commedia which comment and interact with the story, along with moving the furniture.”  They have evolved into our modern day circus clowns.

Set design for this production is by John Bowles, who has created a utilitarian set with Harpagon’s ingenious chair at the center.

Denise Miles’ costumes are beautiful, except for Harpagon, whose tattered bedclothes and threadbare head covering reflect the miserliness of his soul.

“The Miser” is not necessarily a non-stop laugh-out loud play, but for an evening of fun and diversion, it definitely fits the bill.
Posted by Bev Sykes at 4:16 PM