Priscilla Queen of the Desert: The Musical 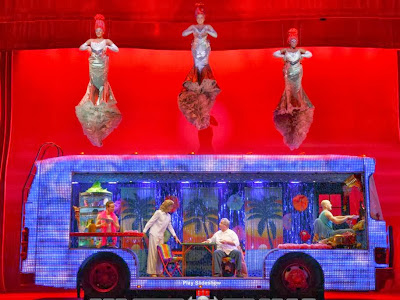 There are more sequins, feathers, glitter, wigs and platform shoes than you can shake a stick at in the touring musical production “Priscilla Queen of the Desert” which opened this week at the Sacramento Community Center Theater. There were dancing paintbrushes, twirling cupcakes, all sorts of flying things, and every animal unique to Australia, from kangaroos to frill-necked lizards, all dancing and singing their way into the audience’s hearts.

“Priscilla” is the musical version of the 1994 movie about three drag queens traveling across Australia’s outback in a big bus on their way to a gig in Alice Springs. The book is by Stephan Elliott (who wrote the original screenplay and directed the film) and Allan Scott, and the music is the most eclectic assortment of covers you can imagine. Everything from Dionne Warwick to Madonna to The Village People to Giacomo Puccini … and John Denver? … among others. There is even a brief salute to ABBA.

The story focuses on Tick/Mitzi (Wade McCollum) and his desire to travel across the outback to meet his 8-year-old son Benji (Shane Davis), whom he has never seen. He brings along two friends, the flamboyant Adam/Felicia (Bryan West) and former drag queen, now transsexual Bernadette (Scott Willis). The three will get an act together to perform in Alice Springs, at a club owned by Tick’s estranged wife Marion (Christy Faber).
The three travel in a bus they name Priscilla, which is so much a part of the story that it’s surprising it didn’t get its own curtain call. It is a bus of many colors, conceived and designed by Brian Thomson, with an interior decorated like a tacky desert motel. The electrified bus moves, rotates and becomes a video screen for some amazing light shows.

This high-energy show is one sizzling production number after another, each bringing thunderous applause from the audience, but while the plot follows that of the movie, the intensity of the glitz robs the story of the poignancy that made the movie special. There are moments of introspection and of tenderness, a sweet love story developing between Bernadette and Bob (Joe Hart), the mechanic who repairs Priscilla and then comes along for the ride, and the emotional meeting of Tick and Benji, but it felt as if the soul of the piece was missing.

However, nobody in the audience was missing anything, as everyone thoroughly enjoyed the 500 or so costumes, 60 wigs, 150 pairs of shoes (nobody can wear a pair of impossibly high heels like a drag queen!) and more than 200 hats and headdresses — there are 65 wig changes, the fastest one taking about 15 seconds.

And there’s a flying Greek chorus, too. The “Divas” (Emily Afton, Bre Jackson and Brit West) who pop in or are lowered down from the flies in a rotating collection of amazing costumes to accompany the stars in such numbers as “It’s Raining Men,” “Girls Just Wanna Have Fun” and “MacArthur Park.” It’s “flying by Foy,” the most prolific theatrical flying service in the world, the company that elevated stage flying to a modern art form.


The three hero(ine)s of this production face homophobes and bullies and their own fears and insecurities, but as their bond of friendship deepens, they maintain their dignity throughout and triumph in the end … looking simply fabulous, of course.