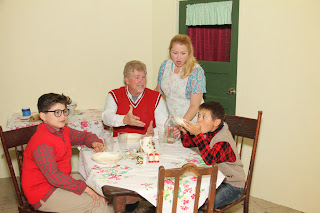 It was 30 years ago this year when the now-classic movie, “A Christmas Story” appeared on the screen.  Partly based on Jean Shepherd’s book, “In God We Trust: All Others Pay Cash,” the film was released just before Thanksgiving in 1983 and became a surprise hit. By the time Christmas rolled around, the movie had already been pulled from most theaters because it had been "played out". After complaints were lodged at the theater owners and the studio, the film played on select screens until after the first of the year 1984.

To celebrate the 30th anniversary of the release of this movie, the Winters Community Theater is repeating the stage version, by Phillip Grecian, first staged by Winters in 2005. This time around it’s Howard Hupe in the director’s chair, assisted by Ellie Yeatman and Jesse Akers.

It’s a big show for Winters, with 15 characters played by 13 actors, most of whom give strong performances.

As Ralph, the grown up “Ralphie,” who narrates the story throughout, Scott Taylor was a perfect choice.  He has a good rapport with the audience, a winning smile, and he makes us all remember our childhood and the adventures we had. In fact, based on the chuckles throughout the play from many men of a “certain age” in the audience, it was easy to see why this hits such a resonant chord..

Sam Peterson is the young Ralphie, his heart set on an official, Red Ryder, Carbine-action, 200-Shot, Range Model, Air Rifle for Christmas, but knows he’s fighting a losing battle because his mother is convinced he’ll put his eye out.  Peterson’s Ralphie is often shy except in the company of his buddies Flick (Ulysses De la Cruz) and Schwartz (Garret Matheson).  Ralphie enacts many fantasies, such as conversations with Red Ryder himself (Greg Lanzaro, who also plays Santa Claus and a Tree Seller)

Trent Beeby reprises his role from the 2005 production as Ralphie’s father, known as “The Old Man.” He’s the perfect sit-com Dad.  Never really utters anything profound, is a bumbling “fixer” of things like the furnace (at which time he excells in unintelligible expletives that shock his family), but is obviously a loving father.

Mother (played by JoAnnMay) is a housewife in the shadow of all those housewives of the 50s.  She’s Beaver’s mother, Jim Anderson’s wife, and Donna Reed all rolled into one.  She runs the house quietly and efficiently, while all the time letting her husband think he’s in charge.  The only battle she doesn’t win is the battle of the famous “leg lamp,” which The Old Man wins using the answers to the questions she gives him.

Jackson Olton is Randy, Ralphie’s younger brother, who has little to say because he spends most of the play wrapped in several layers of warm clothing to protect him from the elements when he goes outside.

Kyle Gardiner is an evil Scut Farkas, the school bully who shows his true nature when Ralphie finally gives him his comeuppance.  He is also Santa’s elf, perhaps the only elf I’ve seen with an evil glint in his eye.  Great facial expressions for Gardiner.

There are a couple of scenes off the stage in a classroom set up on the same level as the audience.  DonaAkers is the teacher, Miss Shields, whom Ralphie hopes to impress with his great writing skills.  Sadly, the scenes are all but unintelligible to the opposite end of the auditorium.  We were aware there was talking going on but other than Miss Shield’s shriek of “you’ll put your eye out,” the rest of the dialog was not able to be heard.

The trio of girls, Sophia Tolley as Esther Jane (who has a crush on Ralphie), Emilla Orosco as Helen, and Paige Davis as Alice were all very cute, especially huddled together giggling, and casting sidelong glances at the boys.

This is a fun family show which should be enjoyed by audience members of all ages.

When we left the theater, I asked my husband if he had ever had a  Red Ryder, Carbine-action, 200-Shot, Range Model, Air Rifle and he said that he wanted one.  He said he never did, because his mother thought he would put his eye out.
Posted by Bev Sykes at 1:19 PM