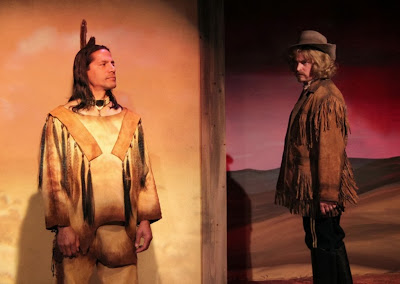 “Crazy Horse and Custer,” a new play by Jon George, directed by Michael Laun, opened on Saturday at Sacramento Theater Company, to incredible controversy...so much so, that I am somewhat uneasy writing any review of this show.  I have the feeling that no matter what I say, it is going to offend someone, but I will take a stab at it anyway.

“Speaking not just for the Plains Indians, but for all Native Americans, Crazy Horse tells of what was lost forever for his people when they won at the Little Big Horn. George Armstrong Custer, the “Boy General” of the Civil War, speaks for all  those American qualities he cherished and ultimately died to secure for himself and his country. Crazy Horse and Custer goes beyond the iconic images of these two warriors to explore the men behind the myths and the imperatives in their characters that drove them to a conflict greater than the battle they fought.” So reads the press release from STC.

Controversy over the play arose when Doug Bissonette, a member of the Lakota tribe and representative for the estate of Crazy Horse, claimed that the play misrepresented the warrior.  Though Louis Leonardo, who plays the role in this play, traveled to the Pine Ridge Indian Reservation and met with the family of Crazy Horse, when the family read the script, they asked that the play not be presented.

Wilmer Mesteth, spiritual leader of the Ogala Lakota, said, “This play is based on fiction and we don’t understand in our culture what they are trying to portray and we feel that it is offensive.”  He also added, “Lakota people respect our leaders, our chiefs, our ancestors. We don’t do such things as this. We are reverent about our leaders, we don’t make jokes about our leaders. The ways people talk about leaders in the press, we don’t do that.”

Articles in “Indian Country” talked of protest and drum circles planned for opening night.  I wasn’t sure what we were going to be walking into.

But, in fact, there were no protests, and two invited members of the Ogala Lakota, guests of Sacramento Theater Company and the playwright, were introduced to the audience before the play began.

As to the portrayal of Crazy Horse, I can only speak as a white woman and what I saw in the incredible performance of Louis Leonardo was a portrait of a noble man, a bit of a loner, who describes his experiences growing up and learning respect for the earth and its creatures, who dispels the myths about the “savage Indians.”  He describes the tradition of warring between tribes (which did not include the sort of slaughter we have seen on movie screens for decades).  He talks of falling in love, and losing that love.  He displays his pride in himself and his ancestors and respect for ancient tradition.

Ultimately he shows how the battle of Little Big Horn set the stage for all that has followed, including moving masses of people to reservations, the loss of land, the slaughter of buffalo and all of the atrocities committed on all tribes of Native Americans, and the manipulation by the American Government.

A quote in the program, from the research unit of the Smithsonian’s National Museum of the American Indian says, “Jefferson suggested that if the various Indian nations could be encouraged to purchase goods on credit they would likely fall into debt, which they could relieve through the sale of lands to the government.”

In contrast, the equally incredible performance as George Armstrong Custer by Kirk Blackinton reveals a megalomaniac with eyes on the White House, a former wunderkind convinced of his invincibility, and still maintaining, even in death, that the world today would be significantly different if other generals around him had listened to his advice.

The structure of the play gives the first act to a long monologue by Crazy Horse, followed in Act 2 by a shorter monologue by Custer, and closing with a brief dialog between the two former adversaries.

Scenic Designer Renee Degarmo has done the best she could do to create “the great plains” on the tiny Pollock stage (and succeeded surprisingly well), and a great deal of the atmosphere is thanks to the wonderfully subtle lighting design of Ron Madonia.

This is not going to be everyone’s cup of tea, and now that it’s out there, under Laun’s deft directorial hand and the fine performance of Leonardo, perhaps there will be a change in sentiment about the portrayal of one of the great names in Lakota history.  I feel it is an important play for all of us who learned our history from books and movies, which vastly distorted the reality of the Battle of Big Horn

Having heard the controversy and then reading your review, I am actually inclined to go to make the decision for myself of whether I should or shouldn't go. Weird huh?

And that is PRECISELY as it should be!!!

This play is offensive on so many levels, here is just one example: Native American actor Michael Horse: "When I was asked to play Quanah Parker in the play, "The Road Man", the first thing I asked the playwright was whether or not the the play had been approved by the descendents of Quanah Parker and the Comanche Tribal Chairperson. The playwright said that was the first thing they did when writing the play was finished and that the family and Tribal Chair had approved. THAT is the correct way to produce a play about Native Americans, not the shoddy, disrespectful manner in which the playwright, Jon George, and the Sacramento Theater Company proceeded.

Just a heads up that Renee DeGarmo is a woman. Agreed, that she is a very talented scenic designer to boot.

Is it true the play ends with Crazy Horse looking at modern day Pine Ridge and saying it'd be better to be dead?

I just wanna say thank you for sharing the content and wish you all the best for your website and your whole team.

I’ve been visiting your page for a couple of times and this is my first time to join in your feeds. I must admit that your one skillful blogger.

I really enjoyed reading your article. I found this as an informative and interesting post, so i think it is very useful and knowledgeable. I would like to thank you for the effort you have made in writing this article.

Success is a choice not a dream. So, work hard for it and always be open-minded. Visit my site for more information. Have a good day and keep on moving forward for that success.

I enjoy reading your articles. You really have a wonderful blogs. Keep up the good work. Thank you also for the information!

Aw, this was a really nice post. In thought I want to put in writing like this additionally – taking time and actual effort to make an excellent article… but what can I say… I procrastinate alot and on no account seem to get one thing done. casino slots