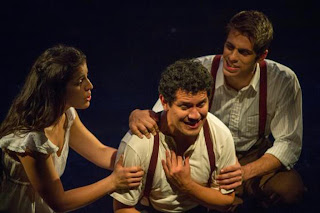 “Broadway’s most talked-about musical” — with book and lyrics by Steven Sater (based on the play by Frank Wedekind) and music by Duncan Sheik — won eight Tony Awards (out of 11 nominations) in 2007 and has acquired a cult following.

It is set in the repressive Germany of the 1890s, a Germany where corporal punishment is the answer to every parental or educational problem and “communication” had not been invented yet. Young pubescent Wendla (Lea Michele look-alike Jessica Walsh), for example, asks her mother where babies come from after her sister gives birth. She is yelled at and told that it happens when a man and woman love each other and are married.

As that is the sum total of her sex education, it is not surprising that when she and boyfriend Melchior (Elio Gutierrez) experiment with sex (in an amazingly realistic scene on the floor in the front of the stage), the inevitable happens and Wendla has no idea why she is pregnant.

She said, “Give me that hand, please, and the itch you can’t control.
Let me teach you how to handle all the sadness in your soul.
(insert lyrics here better not printed)
She said, “Love may make you blind, kid, but I wouldn’t mind at all.”

Teryn Gray brings the most poignancy to her character Ilsa’s song, “The Dark I Know So Well,” wherein she describes the abuse she is suffering at the hands of her father.

It also includes a whole song, complete with appropriate hand gestures, whose title cannot be printed in a family newspaper.

“The Sound of Music” it ain’t!

However, despite the grim nature of the subject matter, the UCD actors give it a professional-quality performance (I actually liked it better than the Broadway production I saw) and should be applauded for their success.
Skylar Collins, Anna Kritikos and Jonathan Conklin deserve kudos for their performances in multiple roles as the token adult female and male characters.

John Iacovellli’s scenic design, of multi-level platforms on massive scaffoldings, added to the cold, impersonal atmosphere of the story, and Michael Palumbo’s lighting design was particularly spectacular, especially the rainbow-colored cloud at the finale.

Music director Erik Daniells led an ensemble of six who performed quite well, though I never did figure out where they hid them during the show.

This production of “Spring Awakening” is a strong show with an important message and it is playing to exactly the right audience.
Posted by Bev Sykes at 1:38 AM