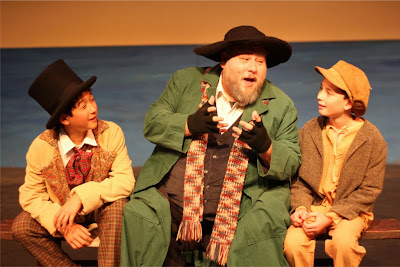 One thing about the actors of Davis Musical Theatre Company, when they are good, they are very, very good and “Oliver!” — directed and choreographed by Jan Isaacson — is very, very good.

While the sets are more utilitarian than lush, there is nothing merely utilitarian about the performances. Arieh Simon, in the title role, is the perfect Oliver Twist. He’s the right age, his thin frame makes it believable that this is a workhouse kid, and he’s a marvelous actor. He also has the vocal ability to hit the high notes in “Where is Love.” It’s an engaging performance.

Michael Mechanick is Fagin, the charismatic bad Pied Piper with his band of child thieves; he gives a memorable performance as a man who is getting older and wondering what the future holds for him. And for a guy of size, he is wonderfully light on his feet.

(Director Isaacson hits a wrong note, though, with the box — about which Fagin is so secretive and protective — being used as a prop in “You’ve Got to Pick a Pocket or Two” with all the boys putting jewelry in it, when later Fagin is so worried that Oliver might have actually seen it.)

Jimin Moon is an electrifying Artful Dodger, the well-dressed head of the pickpockets in Fagin’s entourage. He and Oliver have good chemistry and Moon’s performance is unforgettable.

The Beadle, Mr. Bumble (Brian McCann), and the workhouse housemother, the Widow Corney (Dannette Vassar), nearly steal the show. Both actors are at the top of their game in “I Shall Scream,” which had the audience screaming with laughter.

It is not often that much is said about the funeral parlor owners, Mr. Sowerberry (Scott Scholes) and his wife Mrs. Sowerberry (Katherine Coppola), but these two actors are also excellent. Assisting Scholes’ performance is his pasty complexion and serious expression.

Brooke Flores is Charlotte, working for the Sowerberrys, and Shane Osterhoudt is Noah Claypool, her cruel boyfriend who taunts Oliver.

Kellee Thompson is Nancy, the long-suffering chanteuse with a warm heart. She is locked in an abusive relationship from which she cannot escape because she loves the guy and knows that he needs her, yet she sacrifices much to help Oliver. Thompson has a strong set of pipes and belts out each of her solos with gusto.
Nancy’s friend, Bet, was given a robust performance by Erin Piepgrass. Piepgrass is older than traditional Bets, but she is striking on stage and it’s hard to ignore her.

The bad guy in the story is Bill Sikes (written as both Sikes and Sykes in the program … being a person of the “y” persuasion, I naturally prefer the spelling “Sikes.”), played by Gabe Avila in this production. He is dark and brooding and though from his more diminutive frame you wouldn’t think he could be very intimidating, he has a chillingly cold bloodthirstiness about him.

Sikes’ dog, Shadow is played by Avila’s own dog and gives one of the more polished canine performances I have seen from a non-professional dog.

DMTC veteran Michael Manley was a warm and compassionate Mr. Brownlow, the man who rescues Oliver. He’s the guy everybody hopes for as a grandfather.

Dani Barnett has the small role of the flower vendor in the Act 2 opening and it should be noted that she has a beautiful voice. The other vendors — Summer Rejmankova, Jonathan Kalinen, Katherine Coppola and David Ewey — also were quite good.

Isaacson’s choreography was energetic and sometimes a bit over the top but well performed and particularly fun in numbers like “You’ve Got to Pick a Pocket or Two” and “Oom-Pah-Pah.”

Costume design is by Mary Hickman and all work well, though I did wonder how Oliver managed to find a jacket somewhere between his escape from Sowerberrys' and meeting Dodger.

This is an entirely entertaining and satisfying production. The DMTC family invites you to consider yourself at home, consider yourself part of the family … and have a good time watching them perform.
Posted by Bev Sykes at 2:06 PM