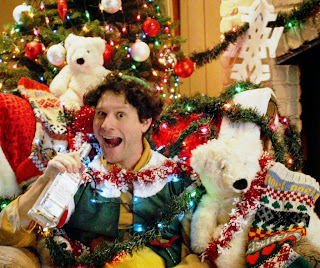 What does a newly arrived wannabe actor do in New York when he can’t find a job, when his dreams of being on “One Life to Live” don’t pan out?
Well, Aaron Wilton as David — using the journal of David Sedaris as adapted by Joe Mantello — is going to tell you in Capital Stage’s funny, irreverent production of the one-act, one-man show, “The Santaland Diaries,” directed by Janis Stevens.

Despite its name, this is not a show for the kiddies, so don’t bring them along, but prepare yourself for a rollicking good time.

Wilton is likeable and energetic, and he uses the entire theater for his stage, bouncing around the actual stage, and then bounding out into the audience to lounge on the stairs, or direct a comment to a member of the audience. He brings everyone into his world as he describes how he came to be Crumpet, the Elf in Macy’s Santaland, during one December.

He describes the interview process, his thrill at being hired and then the intensive training that he goes through, following regulations contained in the “Elfin Guide,” a very thick binder. He explains that “most of the managers are former elves who have worked their way up the candy-cane ladder, but retain vivid memories of their days in uniform.”

Then comes a tour of Santaland, which is described for us in glowing detail, including the “Oh, my God” corner, where people first see Santa and the long line ahead of them, and the “vomit corner,” where nauseous children lose it all.

The next day is elf dress rehearsal and David receives his costume. “My costume is green. I wear red-and-white striped tights, a yellow turtleneck, forest green velvet smock, and a perky stocking cap decorated with spangles. This is my work uniform.” (The costume is based on a design by Gail Russell.)

The set by Olivia McGiff is a surprise, because you wonder how they are going to dress up the very bland stage on which David begins his monologue, and suddenly the wall opens to reveal a dazzling set, festooned with all the Christmas trappings and a chair for Santa.

The diary continues through the experiences dealing with children and their parents. “It’s not about the child or Santa or Christmas or anything, but the parents’ idea of a world they cannot make work for them.”

There is one unfortunate section of this play that bothered me a lot. It is Sedaris’ description of the day the special-needs kids come to see Santa. It’s very funny and the audience laughed uproariously, but the playwright makes a lot of use of the “R-word,” a word that can be very painful and offensive to parents of special-needs kids.
I tried imagining how the audience would have reacted if he had used the “N-word” instead and decided I could not let that pass without comment, as I know parents of special-needs kids who are very upset about the common usage of that offensive word. It tainted, for me, what had been a very enjoyable comedy.

The moment passes, however, and “David” makes it through the rest of his stint at Macy’s, turns in his Crumpet costume and goes to say goodbye to the manager. “Suddenly I loved this woman … I felt certain … together we would share a special moment.”

Do yourself a favor and take in this comedy. It will put you in good spirits for the coming holiday. There’s even an elf called Dreidle, an attempt to appeal to everyone!
Posted by Bev Sykes at 10:51 AM