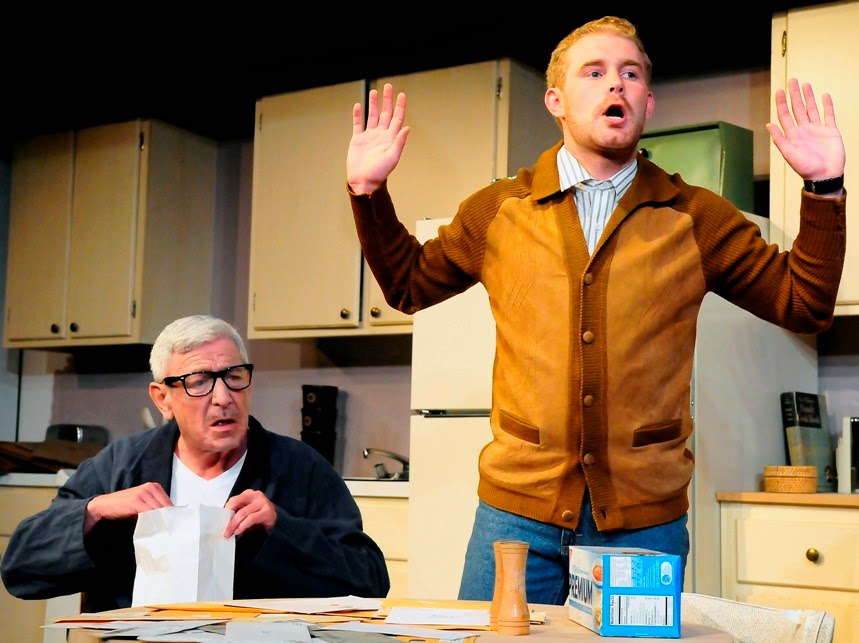 The play is a first by playwright Jeff Baron. It premiered in Stockbridge, Massachusetts in 1996, had a year-long run off Broadway. It has since had more than 300 productions in 37 countries and has been translated into 22 different languages. It has been nominated for 10 different awards around the world for “Best Play,” and won 7 of those awards.

Director Marie Bain explains that the play deals with “the universal concepts of family, friendship, rejection and forgiveness” and discusses the concept of which is more important, the individual or the community?”

Martinez gives a flawless performance as the elderly curmudgeon, grieving for his recently deceased wife, and too proud to admit that he is helpless without her. His life is spiraling out of control. The 60-something Martinez is perfect as the 86 year old Green. Every time he slowly walked across the stage or tried to get into or out of his recliner I saw many of the 80-somethings I see at the local Senior Living facility.

Blanning is initially not very likeable as the brash, smug, impatient young man, forced by a judge to perform community service for the next six months, visiting Mr. Green once a week, as punishment for driving recklessly and nearly hitting the old man.

Green wants nothing to do with any help from anyone, especially Ross, and Ross doesn’t want to be there, but the judge won’t let him off.

The play is two acts, with four scenes in the first act and five in the second. There are black-outs at the end of each scene, the following scene taking place a week later. In this manner, we see the slow growing of a relationship, if not exactly friendship, between the two men.

After two sparring rounds between the two, in Act 3 Ross has a breakthrough when he brings Green soup from his favorite kosher deli and Green discovers that Ross, too, is Jewish. The wall between them begins to crack a little bit.

Over the rest of the play there is a growing, if wary, friendship between the two men, both of whom are harboring deep hurts. Ross is gay and has been disowned by his family. Green’s daughter married a non-Jew and he has not spoken with her in years. Green insists that Ross just needs a good woman, Ross can’t understand Green’s disowning his daughter because of whom she loves.

With these revelations, the script develops problems. Anybody who has been in any discussion about race, religion, or sexual orientation in the last 20 years will find the dialog uninspired, cliche, and repetitive. Though the play is set in 1996, it is being performed in 2014, when it is no longer shocking in most circles to be gay, so that aspect of the plot seems old and tired, though Bain does what she can to make it seem fresh.

The conclusion is predictable, though there will be a few misty eyes before the finale.

It is difficult to understand the appeal of this play, though the awards it has won have mostly been in countries where to be gay, or orthodox Jewish may be less accepted than here in this country, so it may be an eye opener for audiences there.

Still, “Visiting Mr. Green” is worth seeing, if only for watching Gary Martinez at work, and seeing Ryan Blanning’s transformation from an unlikeable to sympathetic character.

Scenic designers Jarrod Bodensteiner and Renee Degarmo have created a nice apartment so homey you felt like you could sit down and read the newspaper on the couch at intermission.