Wrong for Each Other 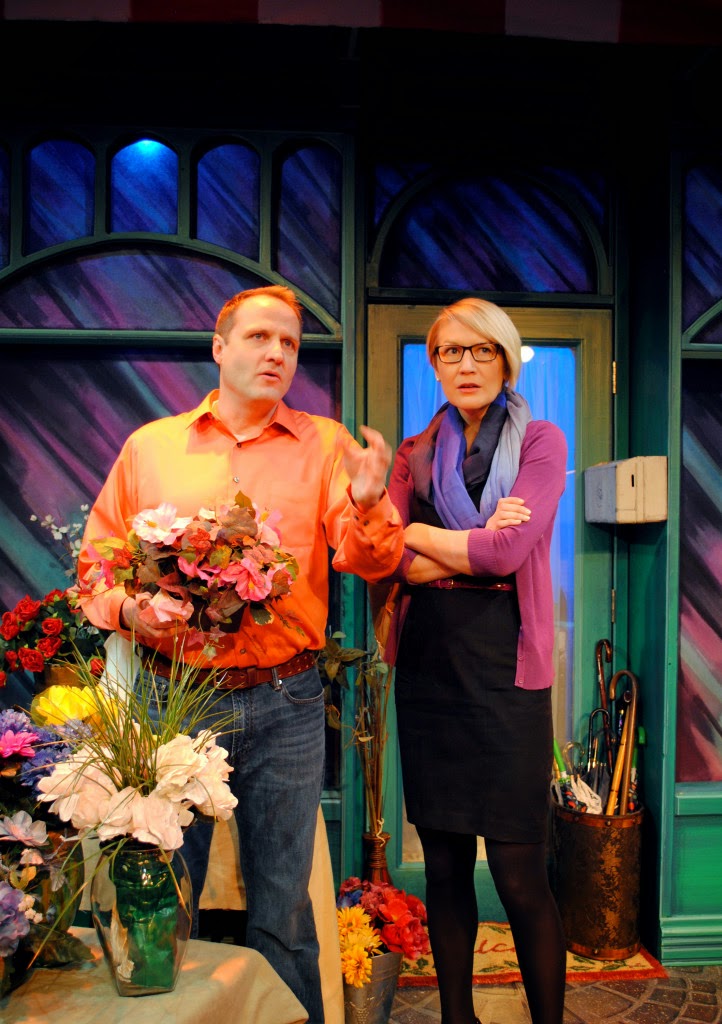 When I think of David Mamet, I think of wordy plays. But the new-to-me Canadian playwright, Norm Foster, leaves Mamet in the dust as far as “wordy” goes!

Foster’s play, “Wrong for Each Other,” is playing at the B Street Theater through April 13, under the direction of Lyndsay Burch. Foster is a favorite for B Street, having previously presented several of his plays, such as “Mending Fences,” “Old Faces” and “The Foursome.”

“Wrong for Each Other” is about two characters, Norah (Melinda Parrett) and Rudy (Kurt Johnson), who have a chance meeting in a restaurant, where Rudy is dining with a bunch of co-workers and Norah is dining alone.

We learn that the pair divorced three years and nine months ago (but who’s counting?). The awkwardness of their meeting soon resolves into the old familiarity, as Rudy gradually decides to share his meal with Norah so the two can visit. Some have subtitled this play “The Anatomy of a Relationship,” and as it progresses, we quickly learn all about the relationship between Norah and Rudy.

The action moves from the present to the past and back again seamlessly. A memory that starts in the present ends up acted out in the past, as the pair change location on the set. Set designer Samantha Reno has created a deep set, where the present takes place toward the audience and the past more toward the back of the stage, with the separation between now and then indicated by something small like the addition or removal of a piece of costume (a scarf, a hat, etc.), or a slight change in lighting.

The set itself is warm and colorful, in blues and yellows with accents from flowers and here and there. A wonderful turntable enables the back of the set to change, while the front remains static.

As the play proceeds, we begin to wonder how these star-crossed lovers ever got together in the first place. She’s a high-class, city businesswoman, into jazz and classical music. Rudy’s father runs the market where she buys her fruit and vegetables. Rudy himself is a house painter who wants to own his own business and buy a house in the country some day. He likes sports; she knows nothing of baseball or any other sport.

Norah’s only requirements of their relationship, stated early on, is that Rudy always tell the truth, and that he not cheat on her, both of which he does, of course. But truth-stretching is part and parcel of their relationship, even now, nearly four years after the fact. (“Are you seeing anyone?” “No.” “What’s her name?” “Susan.”)

In the hands of Parrett and Johnson, under the direction of Burch, the verbal sparring of the two characters is a delight to behold. The actors are pros and have worked together often. They are so at ease with each other that one might forget that this is a stage production.

They are funny, poignant, dramatic and desperate, each in turn. The scene after their first intimate encounter is particularly funny, as both are so ill at ease and not sure what, if anything, they have started.

This is a play that will appeal to anybody who has ever loved anybody and been in a relationship that either worked … or didn’t.

Foster’s brilliance is that he seems to always have something unexpected upcoming. I won’t spoil the ending, but it was one I had not expected, and that’s always when a play is at its most entertaining.
Posted by Bev Sykes at 2:18 PM

Labels: B Street, Wrong for Each Other