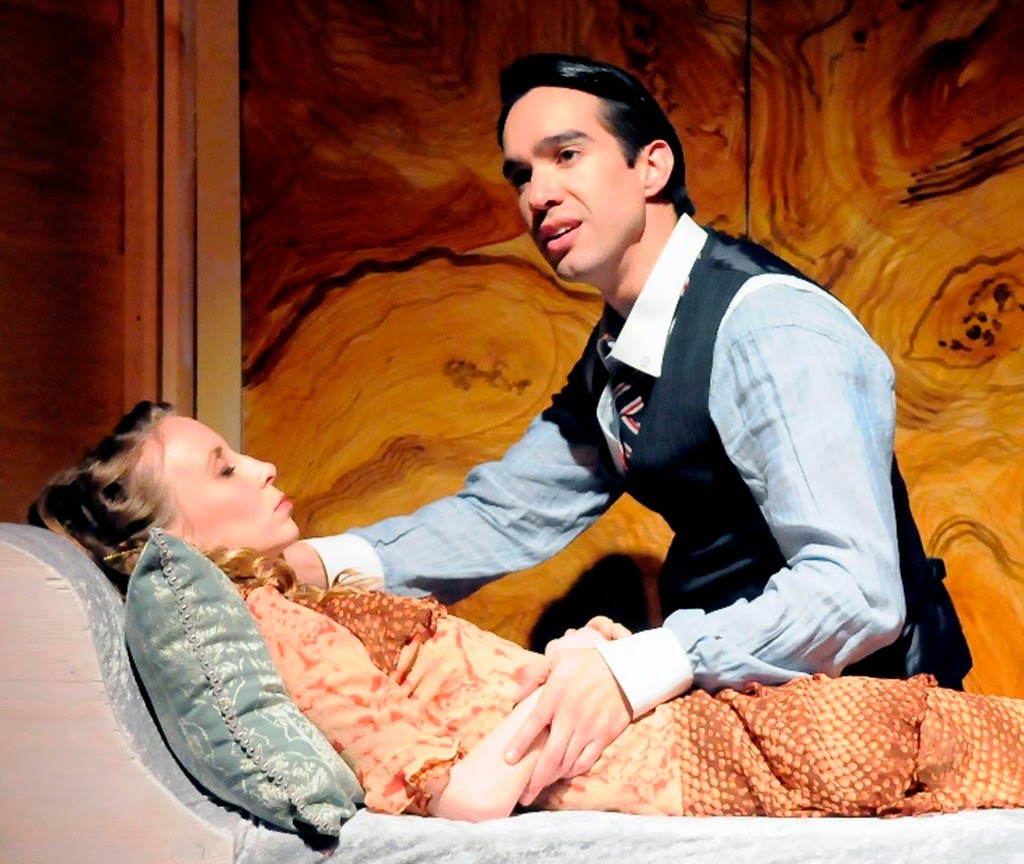 In fair Verona does Sacramento Theater Company set its scene.

Two mob households, both alike in dignity – the Italian Capulets and the Jewish Montagues.

For Sacramento Theater company, this is the first time in its 69 year history that it has presented “Romeo and Juliet,” but director Ed Claudio’s updated vision proves, once again, that the themes of family conflict and young love haven’t changed since the time of Shakespeare and remain relevant today.

The character of Romeo has always bothered me.  He’s head over heels in love with Rosaline, to where he cannot eat, cannot sleep and risks sneaking into a ball at the enemy Capulet home in hope of seeing her.  But on viewing the young Juliet, all thoughts of Rosaline dissolve and suddenly he is head over heels in love with Juliet.  Does not bode well for a lasting relationship.

Despite the failings of Romeo’s character, there are no failings in the performance of Andrew Joseph Perez, a handsome, muscular young man with a six pack he’s not embarrassed to show off.  Perez appeared in the recent Capital Stage production of “The Elaborate Entrance of Chad Deity,” where he played a wrestler. A lot of the moves he perfected in that production come in to play in his fight scenes in this production, and he climbs Juliet’s balcony effortlessly...more than once.  (Not surprisingly, Perez is also the fight choreographer for the production)

Denver Skye Vaughn may be a recent university graduate, but her Juliet looks every bit 15, a waifish figure who has to display a range of emotions from giddy young girl experiencing her first love, to defiant daughter who is going to have her Romeo despite the feelings of her dictatorial father, to fearful wife, taking a potion which will knock her out long enough for everyone to think her dead, to distraught widow, unable to live with her husband dead.  She nails each emotion and takes the audience along with her for the roller coaster ride.

Amazing how much can happen in the space of a couple of days!

Despite all the murders and suicides in this play, usually classed as a tragedy, there’s a lot of funny stuff.  In fact, act 1 is hilarious.  Director Claudio explains that there are many elements of comedy before and even after the deaths of some of the major characters in the story.  With comedienne Amy Kelly as the Nurse you can’t help but have laugh out loud scenes.  She is larger than life and dominates nearly every scene in which she appears.

There is little comedy, however, in Kirk Blackinton’s Capulet, whose rage at his daughter more than just borders on domestic violence.  He is a smoldering cauldron whose sadness at the death of his daughter comes a little too late.

Matt K. Miller is back on the STC stage as the wise Rabbi Laurence, a departure from the Friar Laurence of the original.  (Some dialog changes had to be made, as a rabbi is unlikely to invoke the name of “Holy St. Francis” which became “Jumping Jehosaphat”)

The supporting cast is very strong, with Dan Fagan as Benvolio, Sean Patrick Nill as Tybalt, Jeb Burris as Mercutio, Kristine David as Lady Capulet.  Kevin Frame and Ernestso Bustos, as a cop and the Constable are also quite effective in their characterizations.

Scenic designer Anna Katharine Mantz has designed a beautiful wooden set with many levels, the house of each of the families on opposite sides of the stage.

This is a beautiful looking, strongly acted production which has something for everyone, from broad comedy to exciting fight scenes to delicious eye candy to sexy romance to tear-jerking tragedy.  What’s not to like?
Posted by Bev Sykes at 8:20 AM