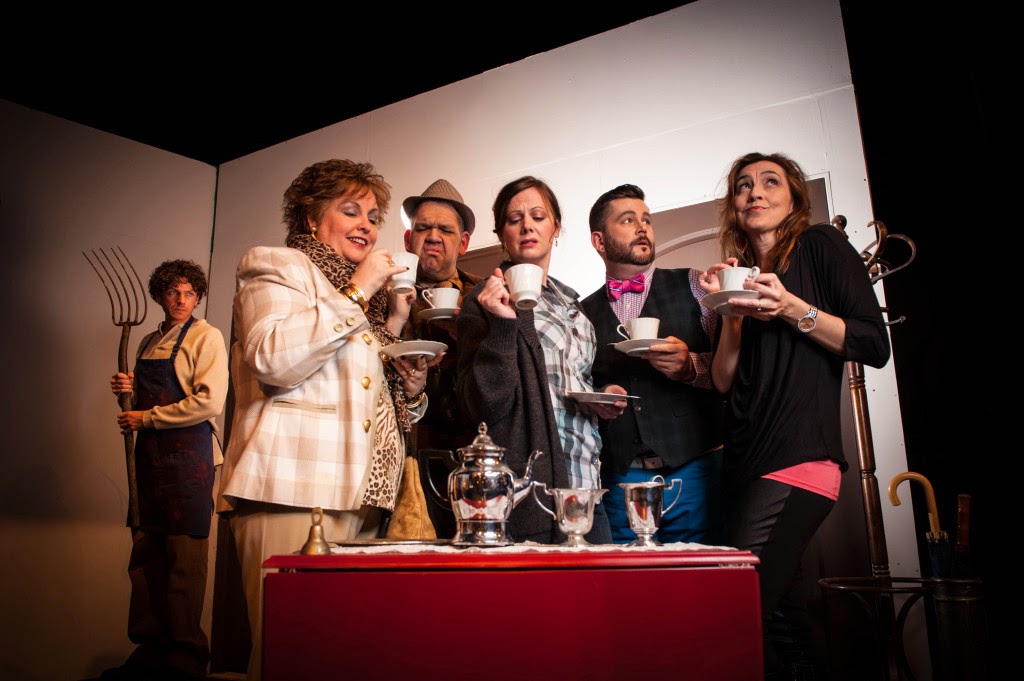 Once you stop trying to make any logic whatsoever out of the fact that five people — an American student, her gay best friend, a British professor, an over-the-hill British actress trying to make a comeback, and a Jewish woman — just happen to show up on the same day at some obscure rural British B&B, run by a creepy guy with an ax in his hand, all looking for a final play that it is rumored Shakespeare might have written and hidden before his death, then you can just enjoy the comedy on its own merits … and there is a lot to enjoy.

“Second-Best Bed” is Abergel’s first full-length play, though he has been working on it ever since he was in grad school. Appearing as the nervous Frederick in Woodland Opera House’s production of “Noises Off!” rekindled his desire to write his own play, and with the help and support of writers’ groups in Sacramento and San Francisco he was able to complete it and present it to former Opera House Executive Director Jeff Kean, who agreed to produce it.

The show is directed by Abergel’s husband, Robert Cooner, who also directed (among other plays), that infamous “Noises Off!” for Woodland, so he knows how to wring the most comedy out of a script.

The story begins when Judy Cobb (Analise Langford-Clark) and her BFF Jerry Jackson (Scott Martin) arrive at the Cock and Bull B&B. The guy in charge, Toby Fowler (Dan Sattel), is a little odd and gives them unpleasant thoughts of the Bates Motel.

Naturally, when things are at their creepiest, a storm begins to form and they realize they are trapped at the B&B for the night.

Enter Dr. Charles Kennington (the always hilarious Jason Hammond), a professor of English literature who arrives all full of bluff and bluster.

The cozy little group is rounded out by Penelope Brooks (Patricia Glass), an over-the-hill British actress, and Goldie Goldstein (Renee D. Mercer), who drips Jewishness as elaborately as Scott Martin swishes his way through the gay character of Jerry — both enough to be easily recognizable, but yet without making either character a caricature.

Though everyone is trying to keep it secret, it turns out they are all looking for the elusive manuscript and trying to find a way into Toby’s bedroom to check to see if it might be hidden in his bed (more suspension of disbelief that a manuscript hidden 400 years ago would still be there!).

Act 2 kept the audience laughing almost throughout the entire act, as there are suspected kidnappings, life threats with unlikely weapons, unbelievable costumes (kudos to costume designer Denise Miles), unexpected couple pairings and, always, the search for the elusive manuscript. To say more would spoil the fun.

If this is an example of what we can expect from Matthew Abergel in the future, I would say he has all the makings of a popular playwright, and I look forward to seeing his next work.
Posted by Bev Sykes at 1:49 PM