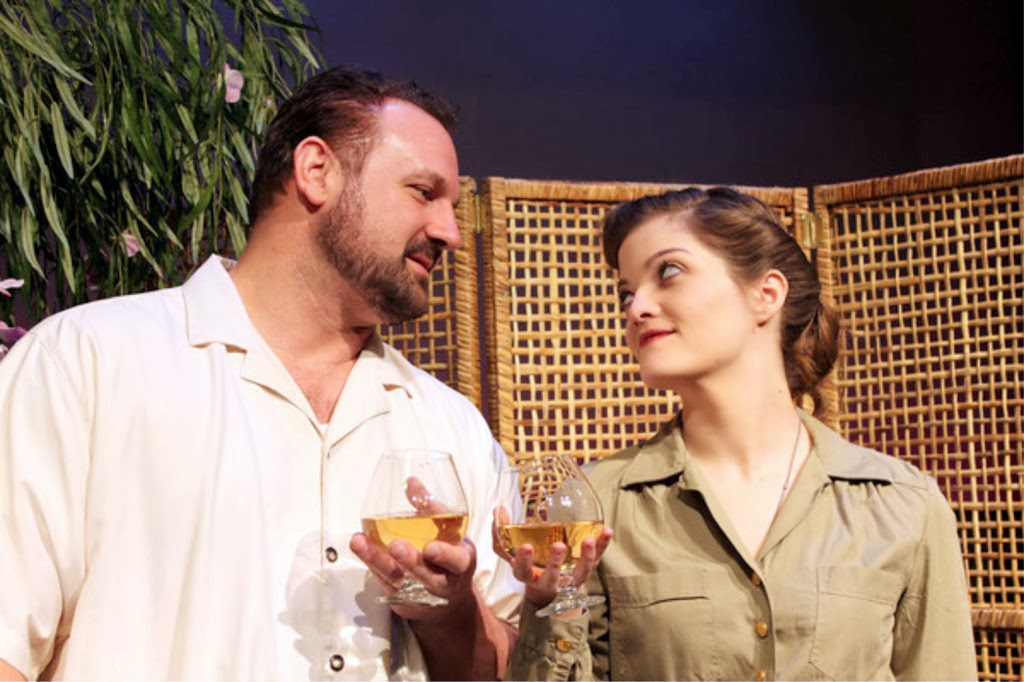 Before the start of the opening performance of the Davis Musical Theater Company’s excellent new production of Rodgers & Hammerstein’s “South Pacific,” producer Steve Isaacson shared that it was exactly 30 years ago that night when his wife, Jan, woke him to announce that the two of them were going to start a new theater group.

Thirty years later, DMTC is going stronger than ever, with this new production proof of the pudding.  And, sadly, the message of this show rings as true today as it did when it premiered in 1949. Themes of xenophobia, hatred and fear of people who are not like “us” permeate this story of a young Navy nurse on a South Pacific island falling for a handsome middle-aged French ex-patriate,, but unable to make a commitment to him when she discovers that he has children by a Polynesian woman.

While this show has many memorable tunes, like “Some Enchanted Evening,” “Younger than Springtime,” “Bloody Mary,” and “I’m Gonna Wash that Man Right Outta My Hair,” it is the bitter song, “You’ve Got to be Carefully Taught,” sung by Lt. Cable when he realizes that his inbred distaste for people with dark skin will prevent him from marrying the young girl he has come to love which still rings true today.

Director John Haine has a first-rate cast for this show.  Laura Woodruff plays Nellie Forbush, the nurse who struggles with the idea of mixed-race children.  She is a strong personality, yet softens when with Emile deBecque (Travis Nagler), the plantation owner she has known only a few days.

Woodruff and Nagler have powerful voices and a lovely chemistry together.  Nagler is not a pretty-boy leading man, but a strong, barrel-chested man who exudes both strength and tenderness.

DeBecque’s children are played by Mckenna Lincoln and Andrew Montano, who are the least likely looking siblings you’d want to see, looking quite different from one another, but so darn cute it doesn’t matter.  Both have mastered their lines in French beautifully.

Bloody Mary, the Tonkinese woman who sells grass skirts and shrunken heads to the military is portrayed beautifully by Dannette Vassar in a role that seems tailor-made for her.  Vassar does not have the vocal power of some Marys, but with clearly modulated tones, the power of her “Bali Hai” comes across just as well as any other.

She is also a woman who is looking for a good future for her daughter, Liat (Ana Chan) and has eyes on Lieutenant Cable, newly arrived on the island, as a mate for the young girl.  She has no qualms about prostituting the girl if it will get her a rich American husband.

Scott Scholes is simply wonderful as Lt. Cable.  He is innocent, idealistic, tortured by his conflicted feelings for Liat...and has a great set of pipes on him too.

The military hierarchy come in the persons of Captain George Brackett (Richard Lui), and Commander William Harbison, played by Ben Bruening, who has been absent from the DMTC stage for 8 years.  It was such a welcome familiar face to see again.

Comic relief is provided by Seabee Luther Billis (Gabe Avila), a wheeler-dealer who knows what he wants and how to get it.  His duet with Nellie at the base’s Thanksgiving Day festival was very funny.

This is a large cast who move well on stage, thanks to the choreography of Katherine Coppola.

The small DMTC budget is never enough for lavish sets but the set and lighting designs of Steve Isaacson managed to create a very believable South Pacific isle.  The silhouette of the volcanic island Bali Hai against a plain sky which changed colors at various times in the day was the perfect effect, and deBecque’s plantation was lovely.  There was even a beach shower with real water for Nellie to wash that man right out of her hair.