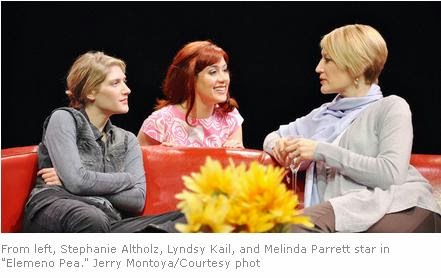 There is a moment early in the production of “Elemeno Pea” — currently at the B Street Theater under the direction of David Pierini — that sets this particular production a step above the mere run-of-the-mill character study comedy that playwright Molly Smith Metzler may have intended it to be.

The character Michaela (Melinda Parrett), a billionaire’s latest trophy wife and mistress of the expensive manor on Martha’s Vineyard, has just returned home unexpectedly. She has had a terrible shock and she needs the support of her paid assistant and friend-for-hire Simone (Lyndsay Kail). Simone is, at the moment, entertaining her sister Devon (Stephanie Altholz) for the weekend (with Michaela’s permission) in the estate’s luxurious guest house.

Michaela bursts through the door and falls into Simone’s arms, starting to bare her soul, needing Simone’s support The two women are sitting together, Michaela revealing a stream of very personal things she and Simone have discussed before and suddenly she realizes there is someone else in the room.

Without moving her body or doing anything obvious, we see Michaela change from the vulnerable woman she had been back into the in-charge matriarch. We see an ever-so-slight change in facial expression, an invisible mask coming over her face, a determined relaxation of the body, the smile just a touch more gracious and more phony, the emotions suddenly put in check as she steps into hostess mode and greets the visitor.

It’s an amazing transformation, with Parrett barely moving a muscle, but it’s an obvious change. It could have been played much differently, more broadly perhaps, but this subtle transformation is an indication of what a well-directed, tightly performed work this is. Parrett is a wonder throughout the play, whether she is the center of the action or a part of the background, her emotions always apparent in the way she sits, the way she moves, the way her mouth trembles ever so slightly.

But Parrett is only one of the talented cast of five that includes Lindsay Kail as Simone, a talented author, unappreciated by even her family, who put her dreams on hold and sold her soul to the devil, in exchange for a hefty salary, a chance to live in luxury, wear designer clothes, travel around the world, and have everything she thinks she wants.

The price is being at the beck and call of Michaela 24/7. We see the conflict in Simone, who professes to love her life, but whose nervousness at the way her sister Devon treats the house gives her away as she carefully and precisely returns duck decoys to their rightful place when Devon moves them.

Devon (Stephanie Altholz) has just come through a terrible relationship, is working at the Olive Garden and sleeping on a beanbag in her mother’s basement, but she wouldn’t trade it for all of Simone’s luxuries, if it means giving up who she really is. She does not have an unexpressed thought and she quickly becomes the raspberry seed in Michaela’s (and Simone’s) wisdom tooth, refusing to relax her principles even when a handsome bribe is offered. Altholz makes her the character to whom we most relate.

Alex Robertson plays the handyman Jos-B (because Michaela already had a Jose … think about it) who appears to be Michaela’s puppy dog, flattering her with pet names, chaste kisses and overt sexual banter while he really hates the woman and has no compunction about talking about his real feelings behind her back. He is another of Michaela’s “friends for hire” who does not hesitate to drop the charade when the situation presents itself.

Rounding out the cast is Kurt Johnson as Ethan, longtime friend of Michaela’s husband, and Simone’s fiancé. Ethan is a caricature of the stereotypical Martha’s Vineyard resident, in salmon-colored trousers and absurd bleach-tipped coiffure and a vocabulary full of verbal texting shortcuts.

It is difficult to understand what Simone sees in him, unless it’s her chance to finally express her independence. Johnson plays this character to the hilt and seems to be having the time of his life doing it.