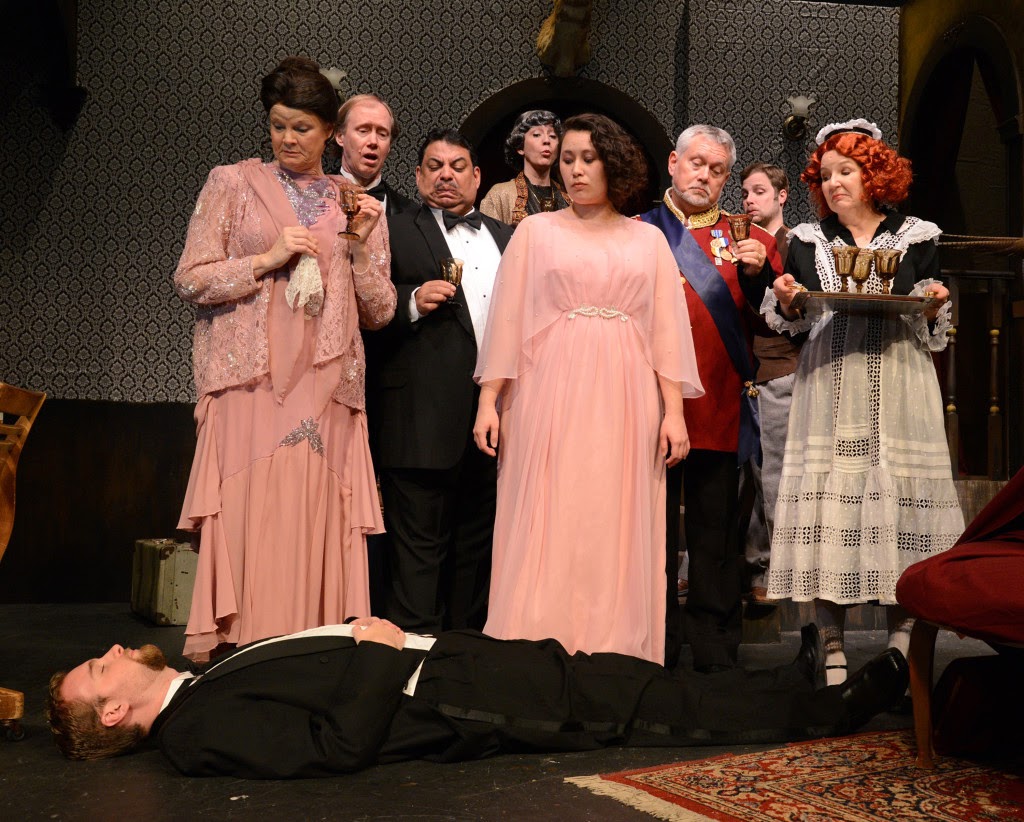 “I’m sorry, the bridge is out. You’ll have to spend the night” was the title of a show more than 35 years ago, at the original Palms Playhouse. It is also the theme for the new murder-mystery musical currently at the Woodland Opera House.

“Something’s Afoot,” by James McDonald, David Vos and Robert Gerlach, and directed for Woodland by Jason Hammond, is a gem of a piece that is the musical version of Agatha Christie’s “Ten Little Indians.”

The premise is that five people are invited to spend the weekend in a mansion on an island. Each of them, of course, has his or her secret, and unbeknownst to each other, they all have paths that cross. Of course, after all have arrived, a terrible storm comes up, which washes out the road and the bridge and they are stuck there. The master of the house, Lord Rancor (whom we never see, except in portrait), is found dead by the butler minutes after the guests arrive.

As the show progresses, the cast begins to be killed off in bizarre ways and the hunt is on for the killer.
Director Hammond has assembled a marvelous cast to play the quirky guests and staff of the manor house. Patricia Glass is Miss Tweed (a salute to Christie’s Miss Marple). She is a no-nonsense gal who takes charge of the investigation once the bodies begin to pile up (the police can’t be contacted, of course, because the phone lines have been cut)

Hope Langdon, the ingenue who is just thrilled to be included for this marvelous weekend (though she doesn’t know why) is played by Jennieke Cohen. She has a wide-eyed innocence and is awed by everything, especially the unexpected visitor Geoffrey (Eddie Voyce). The script calls for Hope to be blonde and one lyric had to be changed because the actress is a brunette … but I was probably the only one in the theater who noticed that!

Voyce is perfect as a member of a British college rowing club who fell overboard in the storm. He has the “shoulders back, chin up” stereotypical attitude we often see in British movies.

James Glica-Hernandez steps out of the orchestra pit and onto the stage, making his Opera House debut as a singer in a book musical. He’s the evil nephew who has come to the manor house to find the will of Lord Rancor and discover if he is the legal heir or not. Based on his performance, I suspect this will not be the last on-stage performance for the Opera House’s resident musical director. He was very funny and has an amazing voice.

Nancy Agee is Lady Grace Manley-Prowe (erroneously introduced by the butler as Manley-Pro, which defeats the humor of her name!), a proper older English woman who is indignant to discover that she is not going to have the weekend alone with Lord Rancor. Agee plays it for all it’s worth, though as the bodies begin to fall, she does loosen up a bit for the delightful “Carry On.”

Col. Gillweather, a military friend of Lord Rancor’s, is played by Jeff Nauer, who may have the best death scene in the show. He makes it hilarious.

Jim Rollans plays Dr. Graburn, a small role that should teach the character not to answer phones in someone else’s house.

The house staff consists of Clife, the butler (Spencer Alexander), the first of the cast to fall. His part is important, but very brief.

Chris Cay Stewart as Lettie, the copper-haired Cockney maid, is very funny, and Flint, the handyman (Colin Coate), is deliciously crude. The two may have the best song in the show, “Problematical Solution,” which describes an escape method Clive can offer the saucy maid.

Director Hammond is also the set designer and has created a marvelous manor house, despite the confines of the Opera House stage. The audience will have a great time discovering the surprises that pop up throughout the evening.

Oh — and that portrait of Lord Rancor on the wall is actually of Jeff Kean, Woodland’s soon-to-be-retired managing director, who also is the voice heard on the recording played at the end.

I am an unabashed fan of this show, having played the doorbell in the orchestra of a production in 1984 (I rang it five whole times — my first, and last, theatrical performance), so I am very critical of how this show is treated, and I am pleased to say that under the direction of Hammond and the talented actors, it is alive and well and in excellent hands.
Posted by Bev Sykes at 3:59 PM