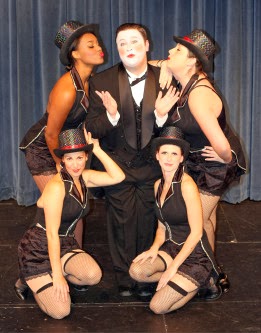 Between 1929 and 1933, Christopher Isherwood lived in Berlin, which formed the backdrop for stories he wrote on his return to London, published as “The Berlin Stories.”

One such story, that of writer Clifford Bradshaw and cabaret singer Sally Bowles, was dramatized by John Van Druten as the play, “I am a Camera” (later made into a movie).

In 1966, John Kander and Fred Ebb won a Tony Award with their musical version, which they called “Cabaret.” The musical, of course, was made into a very popular film vehicle for Liza Minnelli and Joel Grey in 1972. Anyone familiar with the movie might be confused by the stage production, which is quite different from the film.

The Davis Musical Theatre Company last produced “Cabaret” in 2005 and has opened a new production at the Jean Henderson Performing Arts Center.

There are four outstanding performances in this production. Joshua Smith as the Master of Ceremonies (or Emcee) at the Kit Kat Club, where most of the action takes place, is a perfect blend of comedy, decadence and dispassionate observer of the changing society around him. With a twinkle in his eye, he leers at the audience and makes fun of serious things. His performance is a delight.

Likewise, Dalton McNeely — last seen as “the round-headed kid” in Woodland Opera House’s “You’re a Good Man, Charlie Brown” and Marius in “Les Miserables” — gives strong voice to Cliff Bradshaw, a man somewhat out of his element in decadent Berlin and with the sexually forward Sally Bowles (Katherine Coppola). While the delivery of McNeely’s spoken lines is somewhat soft, when he begins to sing, he fills the theater.

The character of Cliff has gone through many permutations in the various versions of the story. He has been heterosexual, homosexual and bisexual. In this production, there is no hint of homosexuality, though McNeely’s chemistry with Coppola is not strong.

Steve Isaacson plays the old Jewish grocer, Herr Schultz, finally finding his love with the landlady Fraulein Schneider (Mary Young, who was born to play this role!). The story of Schultz and Schneider is significantly more important in the stage musical than in the movie, and the bittersweet relationship, and ultimate end of it, is poignant.
Isaacson’s tender handling of the feelings between the two of them beautifully mixes dignity with deep sorrow, as well as optimistic nationalism. The audience knows what lies ahead for him, but Schultz is convinced that, though he is Jewish, he identifies as German, and as a good German, he will be safe.

Scott Scholes is listed in the program as “tenor soloist,” but his rendition of the solo lines in “Tomorrow Belongs to Me” is superb and sets the tone for the gradual acceptance of Nazism with spine-chilling effect.

Coppola is a beautiful Sally and has a pleasant voice, though one could not describe her as a “belter.” Her rendition of the title song was a bit anemic, and one didn’t get much of a feeling of deep affection between her and Cliff.

Gabe Avila is Ernst Ludwig, who meets Cliff on the train to Berlin and is responsible for his choice of living space and his introduction to the Kit Kat Club. Ludwig is a likeable character until we realize that he is working for the Nazis.

Though unseen through the costume, Tomas Eredia makes a great gorilla in “If you could see her through my eyes,” delightful in his pink tutu.

This production is directed and choreographed by Jan Isaacson, with music direction by Jonathan Rothman and costume design by Jean Henderson. Steve Isaacson is the set designer, and the Emcee gets high marks for making it down the very narrow stairs without tripping!
Posted by Bev Sykes at 6:06 PM