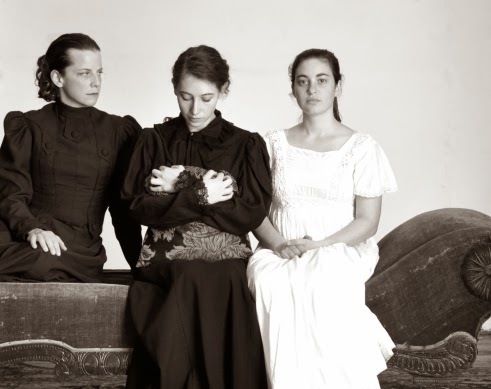 It was an auspicious beginning for Davis’ newest theater — The Art Theater of Davis — as it presented its first production, Anton Chekhov’s “Three Sisters,” directed by co-founder Timothy Nutter, who is also credited with original script adaptation and set design.

I have to make one comment first off. If you know nothing about Chekhov, or about this play, it would behoove you to do a little research before seeing the show. While the program gives the names of the characters and the actor who plays which character, Chekhov rarely uses the actual name of the character in his script. Other than the three sisters, their brother and his wife, nobody else is called by his or her program name.

Baki Tezcan, for example, gives an excellent performance as Vershinin, the lieutenant colonel commanding the artillery battery in town, who enters into an affair with sister Masha, but it was not until I got home that I realized which character he was because he is only referred to by his military title in the script.

Steve Buchanan plays Tuzenbach, in love with youngest sister Irina, but is only ever called “Baron” in the play.
The only reason I knew that the servant they call “Nanny” is named Anfisa was because I had met the actress when the show was in rehearsal.

Trying to keep up with which actor plays which part is impossible.

The program also gives no help as to how much time has elapsed between the acts. Act 2 takes place nearly two years after Act 1, but as the set is the same, the characters are the same and, I believe, the costumes are the same, how are we to know how much time has elapsed, which is an important thing to know, given the changes that have happened in the family during those two years.

Act 3 is a year later and takes place in a bedroom though since the family has been talking of moving to Moscow, there is no way until well into the act that you realize this is not a Moscow apartment, but a bedroom in the house seen in the first two acts. One should not assume that everyone in the audience is familiar with the play before they see it.

However, this should not have any reflection on the actual performances by the actors, which were, for the most part fine.

Sarah Cohen gives a stern and compelling performance as oldest sister Olga, the matriarch of the family, following their father’s death the year before. Olga is a spinster who does not have much joy in her life. She longs to have married “any man, even an old man” if one had asked her, but she has compassion in her soul and takes a job (school headmistress) she does not want in order to have a home for her aging servant, Anfisa (Scarlet O’Connor, a beautiful job as a doddering old woman fearful of being fired because she is no longer capable of doing her job).

The middle sister, Masha is played by Tatiana Ray. She is 21 at the start of the play and unhappily married to Kulygin (Adam Siegel, who has serious projection problems throughout the first three acts). Her behavior, especially in Act 2, where she vacillates between hysterical, uncontrollable laughter to the depths of depression, bent over, holding a pillow in front of her as perhaps her barrier against the world, might indicate that she suffers from manic depression. She also has the most biting wit and the clearest perception of the family condition.

Irina (Claire D’Angelo) is celebrating her 20th birthday at the beginning of the play. She is young and idealistic and full of dreams of her future life in Moscow, where she knows she will find true love. Ultimately she suffers the greatest loss and though her dreams have been squelched, she resolutely decides to move to Moscow anyway.

Tyler Shaffo is Andrey (Andrei), the youngest child and only male in the family. He, too, plans to move to Moscow, where he knows he will have a shining career as a professor, but by Act 2 his dreams have faded. He is saddled with a shrewish wife and a baby and is stuck in a job as secretary to the County Council. Shaffo has the perfect look of a young Russian intellectual.

Natalia (called Natasha in the play) is played by Cheryl Leohr. She enters the family as a very shy, insecure girl, in love with Andrei. She dresses poorly and much fun is made of an inappropriate belt that she wears (though it appears to match her dress nicely … perhaps costumer Ania Mieszkowska could have made it just a bit more inappropriate!). By Act 2, however, she is a mother and throughout the rest of the play she gradually becomes the boss in the house, especially after Andrei runs up a huge gambling debt and has to mortgage the house in order to pay it.

Patrick Hunt is particularly good as Chebutykin, the old doctor (“nearly 70″), who starts the play as a fun person who has given up drinking and is living a clean life, but later reverts to his old ways and while drunk blurts out a shameful family secret. Irina is his favorite of the three sisters and he is forever bringing her gifts (some speculate that as Chebutykin once had an affair with the girls’ mother, that Irina is really his child, though there is nothing in the plot to address that).

The smallness of the theater (a little gem of a space carved out of part of Third Space, the multipurpose space housing shops, studios, workshops, etc. on Olive Drive behind Redrum Burger) brings the audience into the family and makes us all feel, at times, like uncomfortable guests at a dysfunctional family dinner.
Posted by Bev Sykes at 10:29 AM