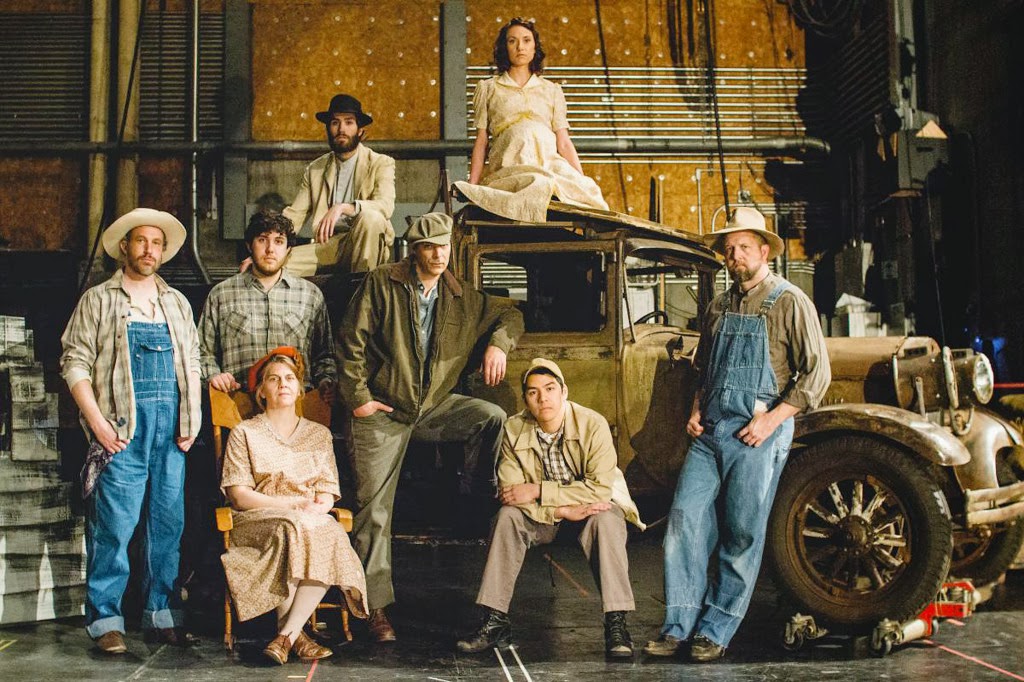 Today’s newspapers are filled with stories of climate changes that are wiping out crops and causing the price of some goods to skyrocket, anger over migrant workers taking away jobs for the locals and greedy bankers ready to foreclose on homes and turn families out on the streets.

Was there ever a more perfect time for the revival of John Steinbeck’s Depression era story, “The Grapes of Wrath,” now at UC Davis’ main theater.

The climatic change was the yearly dust storms that rolled across the plains, killing off crops and making the soil uncultivable. The migrant workers of the 1930s were “Okies,”coming from Oklahoma to California on the promise of farming work, as welcome then as are today’s Mexican migrant workers. And haven’t there always been heartless bankers ready to foreclose on a family’s mortgage in order to line their own pockets?

“The Grapes of Wrath” was the perfect choice for director and Granada Artist in Residence Miles Anderson. Anderson writes that by the age of 14 he had read all of Steinbeck’s great novels and that his mother’s upbringing in Southern Rhodesia (now Zimbabwe) was “deprived and penniless,” so this story of the Joad family resonated with him.

He also found it significant that UCD is located in a farming community, just 150 miles north of Salinas, where Steinbeck lived and worked.

In Frank Galati’s adaptation of the story (which won the Tony Award for Best Play in 1990), music is added (by orchestra members Kristen Guggenheim, Stephen Robinson and Cole Sutliff), though this is not a musical. The musical numbers are stuck in at certain points to lend an air of period authenticity and strike the proper tone, a lovely background for a funeral and a lively accompaniment for a camp dance, for example.

John Zibell, the only Actor’s Equity actor in the production, is a wonderful Tom Joad, very noble, very dedicated. Tom has just been released from prison (“on parole,” he has to tell everyone who assumes he has escaped!) and returns to find his family home abandoned, the family having packed up and preparing to move to California because of a flyer they received saying that 800 jobs are waiting to be filled.

The family piles into a marvelous wreck of a truck (on loan from the San Francisco Opera) and proceed through several adventures, both good and bad, to head for California. On the way they bury both Grampa (Ned Jacobson) and Gramma (Lindsay Beamish), both of whom are delightful oldsters, totally devoted to each other and bereft at the thought of leaving their lifelong family home. Grampa has to be drugged to get him on the truck.

Ma Joad is a wonderful character and Janlee Marshall gives her both pride and stoicism, a woman whom life has tried to beat down, but who refuses to give up on hope. It is she who is determined to keep the family together.
Cooper Wise is Jim Casy, the former preacher who has lost his ability to preach because he just doesn’t believe any more, though when needed, he can manage to find words for grace before meals, or for a burial.

There are others in this cast who are also strong and add to the overall success of the work. David Orzechowicz is Pa Joad, a hard-working sharecropper who is determined to believe that he will find work if he can just get his wreck of a truck to California.

Amanda Vitiello is Rose of Sharon, all “growed up,” married, pregnant and already feeling beaten down by life, even more so after her husband Connie’s (Kyle Roddy) desertion and the death of her child.

The children, Ruthie and Winfield are double cast and played — on the night I attended — by Ella Kroll and Geoffrey Votaw (who is so cute he steals the show, though very professional while on stage). In other performances the roles will be played by Isabella Park and Django Zibell (“Tom Joad’s” real-life son).

Anyone who has seen the movie will remember Henry Fonda’s iconic “I’ll be all around” speech, as he prepares to leave his family to spare them having to hide him from the police. Fonda gave it the weight of any major speech, but in this production, Tom is just talking to his Ma and it’s his way of letting her know that he is leaving … and that he plans to work for better working conditions for people like the Joad family.

Steinbeck shone the spotlight on cruel and inhumane treatment of some people by other people, but he also showed that there is goodness and hope in the world. It is a message that we would all do well to remember, whether we are the downtrodden, or those in a position to do something about the conditions of our fellow man.
Posted by Bev Sykes at 2:16 PM