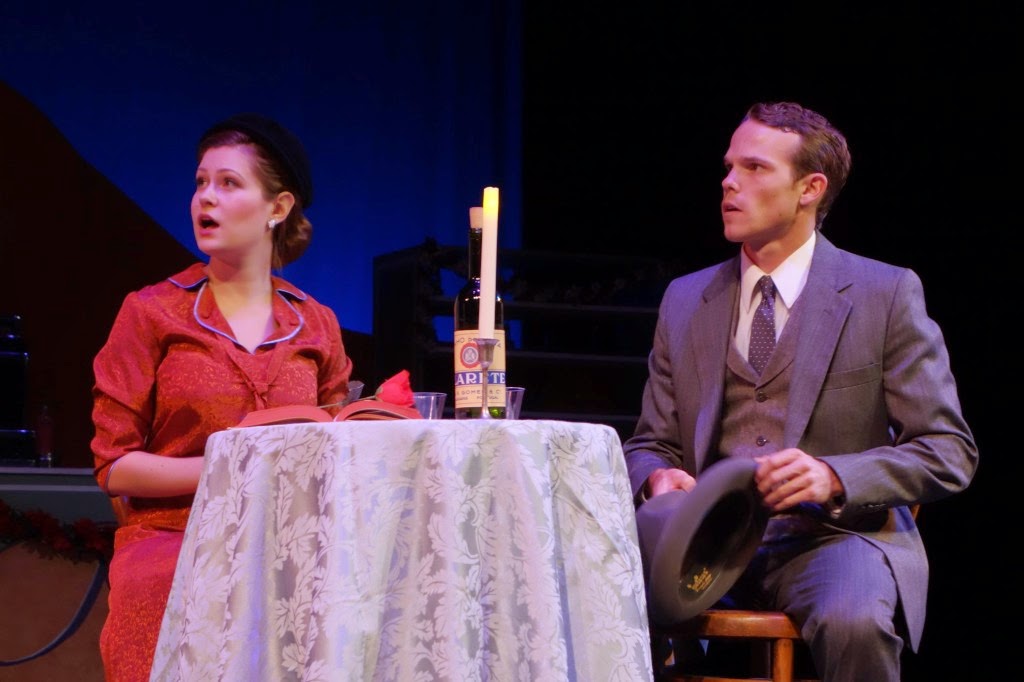 Prior to the opening of its very first musical, “She Loves Me,” directors Gia Battista and Rob Salas welcomed the audience to the Davis Shakespeare Ensemble’s new home: the Veterans’ Memorial Theater. Salas invited everyone to enjoy the show and then return home and tell all of their friends, enemies and acquaintances how awesome it is.
Fortunately, I have a much wider audience than anyone else in the theater, so I am here to tell everyone — this is one awesome show!

“She Loves Me” by Joe Masteroff, Jerry Bock and Sheldon Harnick, and directed by Battista, is the first non-Shakespeare production for DSE and is being presented as part of the Davis Shakespeare Festival, in repertory with “Much Ado about Nothing.” (Check their website, www.shakespearedavis.org, for which show plays on which date).

To start, leaving bug spray outside, entering the air-conditioned Vets’ and sitting in soft seats was wonderful already. The set by Tatiana Kuilanoff is simple, but well-constructed and adequately represents the parfumerie of Mr. Maraczek (Matt K. Miller).

“She Loves Me” is the third (of four) adaptation of the 1937 play “Parfumerie” by Hungarian playwright Miklos Laszlo. In 1940 Jimmy Stewart and Margaret Sullavan brought it to life in “The Shop Around the Corner.” Judy Garland and Van Johnson set it to music in the 1949 film “In the Good Old Summertime,” and Tom Hanks and Meg Ryan brought it up to 1998 with “You’ve Got Mail.”

Briefly, two employees of a store dislike each other at first sight, which makes working together difficult. At the same time, both employees are secretly carrying on an anonymous correspondence with a “Dear Friend” met in some sort of lonely hearts group, and both have become infatuated with their disembodied correspondent. Neither realizes that the disliked co-worker is the “friend” in question.

Laura Baronet is Amalia, hired by Maraczek because she helps him win a bet by selling a music box that store manager Georg (Ian Hopps) was certain would never sell.

Baronet is warm, with a sharp edge to her. She is lonely, a bit desperate, and pinning her hopes on meeting her Dear Friend. Baronet displays a good comedic sense and has a beautiful voice. Her second act “Vanilla Ice Cream” song was both funny and a poignant act of self-discovery.

Hopps is a winsome Georg, immediately lovable. He’s a loyal employee and very good at his job, though that darn Amalia just gets under his skin at times. When he discovers who she really is, his true nature shines through. Though every song he sings is a pleasure, his “She Loves Me” is a real highlight of the show.

This show has a stellar supporting cast, including Susanna Risser as the middle-aged oversexed saleswoman Ilona Ritter, not so secretly carrying on an affair with the shop’s roué Kodaly (Matt Edwards) who is so sleazy you want to wash your hands at intermission.

Georg’s good friend is Sipos (John Haine), a middle-aged man with a family who becomes Georg’s wing man as he approaches his date with his anonymous girlfriend.

Pablo Lopez is delicious as Arpad, the delivery boy who has higher aspirations. His “Try Me” was very funny.
Tim Gaffaney first appears as a private detective hired by Maraczek, but he completely shines in a later scene as a waiter at a restaurant that insists on a “Romantic Atmosphere.” Gaffaney here makes much of a small role, proving that there are no small roles!

An ensemble of customers, lookers-on, diners, etc., are played very well by Gabby Battista, Caitland Martin and Patty Shade.
The five-piece band, under the direction of Emma Gavenda, is on stage, hidden by the scenery, but not hampered by it. They provide a lush accompaniment for the action on stage.

This production is pure enjoyment from start to finish. The only thing that kept opening night from being a five-star performance is a problem was an audio one that I hope will be fixed later in the run. All the actors wear body mics and the sound was problematic at this first performance, sometimes much too loud, sometimes too soft. As there was a sound check going on when we got to the theater, I assume this is a situation they are aware of and are working on.

This had the feel of a professional production and bodes well for upcoming productions at future festivals. I just worry that it will be difficult to bring enough patrons to the show to meet the expenses of the larger venue. The show runs for six weeks … there is no excuse to miss it!
Posted by Bev Sykes at 1:19 PM