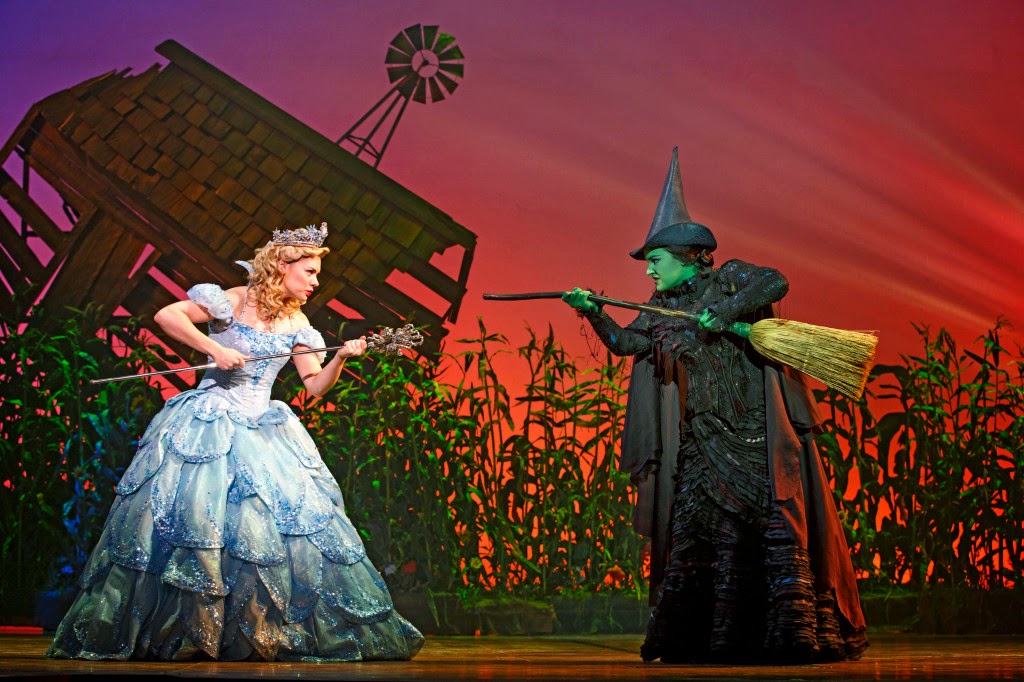 It is clear when you enter the memorial auditorium and see a fire breathing (or rather smoke blowing) dragon hanging over the stage, when you watch Glinda float to the stage in her metallic bubble, or when the Great and Powerful Oz starts huffing and puffing, why “Wicked” has been declared a “cultural phenomenon” by “Variety,” “The best musical of the decade by “Entertainment Weekly,” and has won over 50 major awards, including the Grammy and three Tony Awards.

There’s no question about it, this musical is magnificent.  A large cast, a spectacular set, beautiful costumes and more special effects than have been seen on the auditorium stage in a very long time.  There is an added plus of a real orchestra that does not need so much amplification that your ears hurt.

It is also clear why after an absence of only two years, the California Musical Theater Company is already bringing it back.  The ~2,500 seat house appeared to be, if not completely full, at least very nearly full.

“Wicked” is based on the wildly popular novel of the same name by Gregory Maguire, which tells the “back story” of the beloved Oz characters.  It is Maguire’s prequel to “The Wizard of Oz,” answering such questions as “why is the wicked witch green?” “Does she have a name?” (Yes--Elphaba--Maguire’s homage to L. Frank Baum’s name), “Why is she so mean?” “What do we know about her sister, other than that she was killed by a falling house?” and “Can anyone really be as sticky sweet as Glinda?”  (We never do learn if there was ever a Witch of the South, though).

Maguire’s book was adapted for the stage by Winnie Holzman with music and lyrics added by Stephen Schwartz.

Those familiar with the performances of Idina Menzel and Kristin Chenoweth, who originated the characters on Broadway will find that Emma Hunton (Elphaba) and Gina Beck (Glinda) have made the roles unique to themselves. Hunton, a powerful Elphaba, has appeared in no previous productions of this show, though Beck, making her U.S. debut, did play Glinda in London.

The characters meet at school.  Glinda is the overly perky, blonde, cheerleader type, who arrives at Shiz University surrounded by her adoring entourage and just knowing she is going to end up with the most handsome guy on campus.  She is a flibbertigibbet concerned only with herself, her looks, and what makes her look good.

Elphaba, having had a sad childhood that included abuse at the hands of her father, and being made to be the caretaker for her disabled sister Nessarose (Jenny Florkowski) is a serious student, concerned about real world problems, in particular the fact that something baaaad is happening in Oz, as Professor Dillamond (a goat) (Tom Flynn) is losing his ability to speak and forgetting how to understand, as are many of the heretofore English speaking animals in the country.

Through an error, Glinda and Elphaba are assigned to be roommates and it’s instant loathing for both, though over time Glinda can’t help herself and decides to help Elphaba become “Popular” (one of the perky hummable tunes from this show).

Rounding out the cast are a host of Ozians, such as Boq (Jesse JP Johnson), the Munchkin who is in love with Glinda and is willing to do anything she wants to win her heart, though in the process he loses his own.

Nick Adams is Fiyero, who arrives at Shiz the male equivalent of Glinda...not interested in study, wanting only to party and hang out with the most beautiful girls on campus.  Over the course of the show, he finds true love and undergoes perhaps the greatest transformation of anyone in the show.

Tim Kazurinsky is the Wizard, harboring a secret longing all of his life and realizing, too late, that he didn’t have to look farther than his own front yard because it was there all the time.

Alison Frasesr is Madame Morrible, headmistress at Shiz, who takes Elphaba under her wing when she discovers the girl has magical powers that can help her in her own goals.

There are wonderful enchanting moments in this show (such as the Act 1 Finale) and the tender farewell of Glinda and Elphaba, singing “For Good,” a song with which anyone who has had and lost a good friend can identify.

It’s a long show, but passes in an instant.  It’s also a pricey show, so see if you can win one of those $25 Wicked lottery tickets.  A day-of-performance lottery for a limited number of orchestra seats will be held. Two and one-half hours prior to each performance, people who present themselves at the Convention Center Box Office, 1301 L Street, will have their names placed in a lottery drum; thirty minutes later, names will be drawn for a limited number of orchestra seats at $25 each, cash only. This lottery is available only in-person at the box office, with a limit of two tickets per person. Lottery participants must have a valid photo ID when submitting their entry form and, if chosen, when purchasing tickets. For questions about the lottery, call the box office at (916) 557-1999.
Posted by Bev Sykes at 12:34 PM