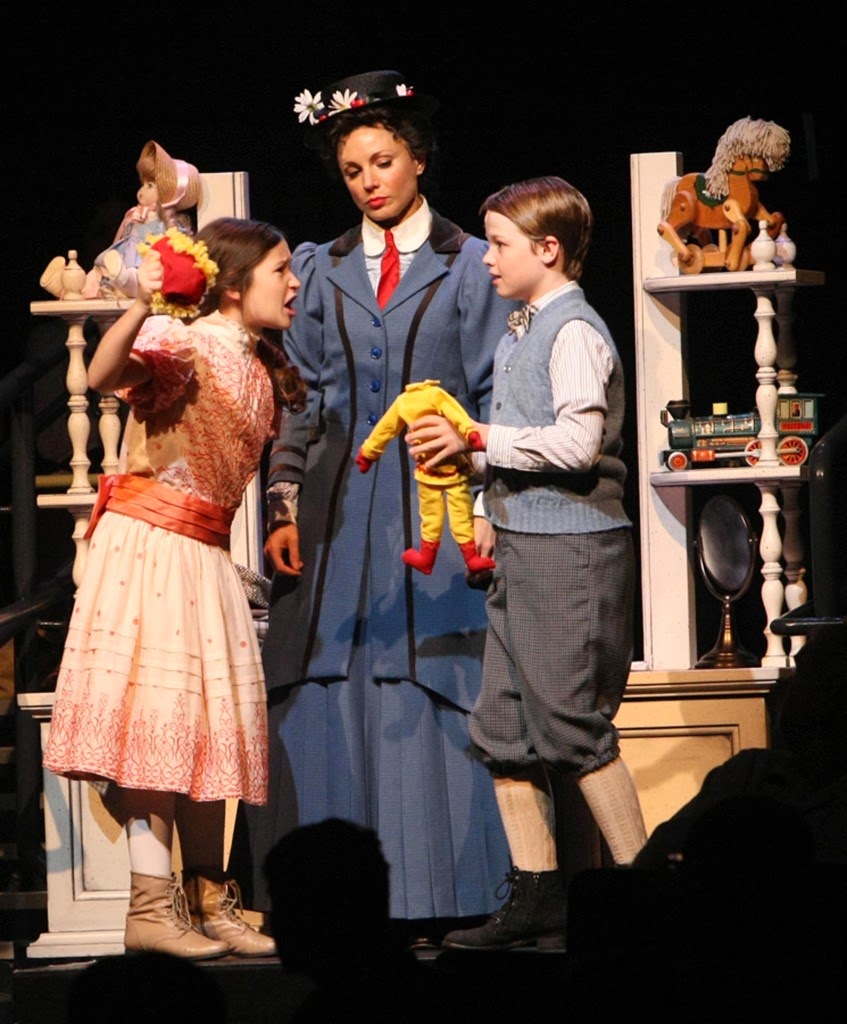 The Music Circus’s first-ever production of “Mary Poppins” is nothing short of supercalifragilisticexpialidocious.
In his introduction to opening night, Richard Lewis, president and CEO, said this was the biggest show the Music Circus had ever done. And based on the number of things that come out of the ceiling, go into the floor or rotate around the stage, I believe him.

Not only is it a big “stuff” show, but it’s a wonderfully acted show as well. Kelly McCormick, making her Music Circus debut after extensive regional theater and national touring companies for “Les Miserables” and “Chitty Chitty Bang Bang,” is a perfect Mary Poppins, the enigmatic nanny who arrives just in the nick of time to help the Banks family find their way to a better overall relationship.

McCormick sings, dances, flies and inspires. She has a warm relationship with the Banks children, takes no prisoners in the discipline department, yet can kick up a heel or two with chimney sweep Bert (Robert Creighton). She is more than “practically perfect.”

Creighton is a delight. He seems to know “things” about Mary and has a special relationship with her, but he keeps her secrets. And he dances up a storm, particularly in the show-stopping “Step in Time” on the rooftops of London with the other chimney sweeps.

Mary’s relationship with the Banks children is critical, and Music Circus has two excellent young actors in those roles.

Davis’ own Noa Solorio — who cut her acting chops in the Davis Musical Theatre Company’s Young People’s Theater, and already has two other Music Circus seasons under her belt — is Jane, too old, really (she feels) to need a nanny, but warming to Mary and entranced by the magic she brings to the household.

Ben Ainley-Zoll is Michael Banks, a bit of a scamp and more mischievous than his sister, but a kid who just wants his dad to go fly a kite with him.

David Engel is father George Banks, a stiff-collared businessman who believes parenting should be left to his wife and the current nanny. He has forgotten what it is to be a kid and needs a Mary Poppins to give him gentle reminders.

Long-suffering wife Winifred Banks is Shannon Arne. Winifred is a former actress stuck into London society and hating it, and unable to quite connect with the business associates her husband wants her to court. She is a warm and loving mother, but seems unable to understand why her children are out of control much of the time.

Helen Geller makes a wonderful impression as the “bird lady,” selling birdseed for “tuppence a bag.” She is a street person, but warm and caring toward her birds, and her song “Feed the Birds” is a lovely moment in the show.

Steve Schepis is a marble statue of the god Neleus come to life in the park. He has a marvelous dance routine and befriends the children.

Ruth Gottschall is Miss Annie, the nanny you love to hate. She is George’s former nanny who offers “Brimstone and Treacle” instead of a spoonful of sugar in the children’s daily tonic and rules with an iron fist. I am surprised she didn’t get hissed by the audience.

Of necessity, much of the fantastic Banks house one would see in a Broadway production of this show cannot be duplicated on the Music Circus stage, but unlike the disappointing “A Chorus Line,” it didn’t matter for this show. Use of the entire theater for the chimneys of London, Music Circus techies who whisk furniture in and out with amazing speed and precision, and a magical kitchen that certainly does surprising things creates Mary Poppins’ world beautifully.

Lewis announced that the show is already nearly sold out, so tickets may not be possible to get, but through Raley’s, a special children’s rate is offered. Children (as well as their adult companions) will certainly love this show.