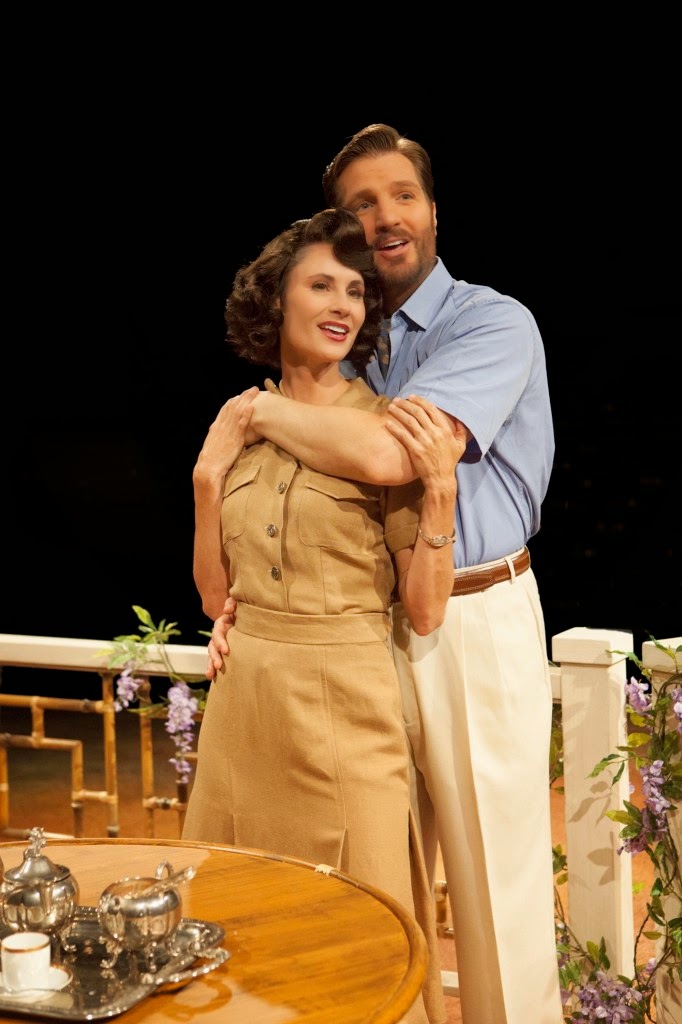 It was some enchanted evening at Music Circus’ opening of the beloved Rodgers and Hammerstein classic, “South Pacific.”

This 1950 Tony Award-winning musical, based on James Michener’s Pulitzer Prize-winning novel “Tales of the South Pacific,” is an old war horse, but its popularity has not dimmed. At times, the plot seems very dated. At other times, one marvels at — and is perhaps depressed by — the consistent timeliness of its message.

Rodgers and Hammerstein were not afraid to tackle the problems of the day, albeit in a musical way. They made a courageous statement about racial bigotry, which was not a popular thing to do in the 1940s, and yet the song “You’ve Got to be Taught” remains today — sadly, perhaps — an anthem to answer the bigots of every race, gender and sexual orientation.

“South Pacific” is the odd musical that neither opens nor closes with a big musical number, instead opening on the veranda of the home of plantation owner Emile deBecque (John Cudia), where the children, Jerome (Matthew Feniger) and Ngana (Ayanna Navarro) — both adorable, disciplined and talented actors — are singing a French children’s song, the same simple song that ends the show as well.

DeBecque, a French expatriate, is entertaining Arkansas-born Nellie Forbush (Beth Malone), a nurse from the nearby naval base, with eyes toward making her his wife, to fill the loneliness of his life on the island.

Malone establishes herself as a winsome Nellie with her first song, “A Cockeyed Optimist,” with her Kellie Pickler-type accent and sparkly personality. She struggles with her feelings for deBecque, weighed against the reality of his life before she met him. She seems to have no problem accepting that he has killed a man, but can’t handle the reality of his late Polynesian wife.

When Cudia opens his mouth to sing “Some Enchanted Evening,” one has to gasp at the voice. I wish they had put some gray in his hair as he really doesn’t seem old enough to play this character, but there is no denying his talent or charisma, and there is no doubt why Nellie has fallen for him in a matter of only a couple of weeks.

Returning for her second appearance as the Tonkinese woman, Bloody Mary, is Armelia McQueen, who is simply marvelous. She will sell you cheap trinkets, grass skirts, shrunken heads or the body of her young daughter, if she thinks you’ll make beautiful babies together. Her “Bali Ha’i” is outstanding.

Mary has her eye set on Lt. Joe Cable (Eric Kunze, reprising his role), arriving on the island, hoping to enlist deBecque’s help with a covert mission to spy on the Japanese. Cable is young and handsome and, when offered Mary’s daughter Liat (Briahna Yee), he easily succumbs to the temptation, though when faced with the opportunity to marry her, he can’t so easily turn his back on his rigid New England upbringing. The anguish of his situation is painfully clear in his “You Have to be Taught.”

The Liat-Joe plot line feels strikingly inappropriate in this day and age, where there is such emphasis on sexual exploitation of innocent young girls. The lieutenant is taken to meet a very young girl for what becomes an instant physical encounter. As the two embrace for the first time (this being a show from 1949, the manner of the encounter is only hinted at, when the lights go down and then come up on a shirtless Joe lying in the lap of a happy-looking Liat), there is such depth to the emotion that it does not ring true. But the plot line has been playing successfully for more than 50 years, so the audience must not mind.

Providing comic relief is Jeff Skowron as Luther Billis, a Seabee who is a wheeler-dealer, out to make a buck whether it’s making grass skirts or doing laundry for Nellie (who praises his pleats). He has a big, mercenary heart and when he causes a diversion to allow Cable and deBecque’s operation to succeed and is chastised by the Commander, he’s thrilled to discover the unauthorized action cost the military $600,000 because his uncle told him he’d never be worth a dime.

While Skowron is a delight whenever he is on stage, he is at his best in the Thanksgiving show, doing “Honey Bun” with Nellie and the other nurses.

Music Circus stalwart and favorite Ron Wisniski turns in an outstanding performance as Cmdr. William Harbison, trying to keep everything on the base in order. He barks out orders like Mayor Shinn in “The Music Man.”

The ensemble is excellent, particularly the Seabees, a group of men who each have small solos to sing. As someone remarked on leaving the theater, “there is no weak voice in this cast.”

“South Pacific” evokes situations and emotions still prevalent today. In the end, it is through the children that we see hope for a more tolerant tomorrow, a tomorrow for which we are still waiting, more than 50 years later.

When The Tenor Phantoms singing Some Enchanted Evening, you have to be swooned. John Cudia and Matthew Cammelle played this role at the same time.