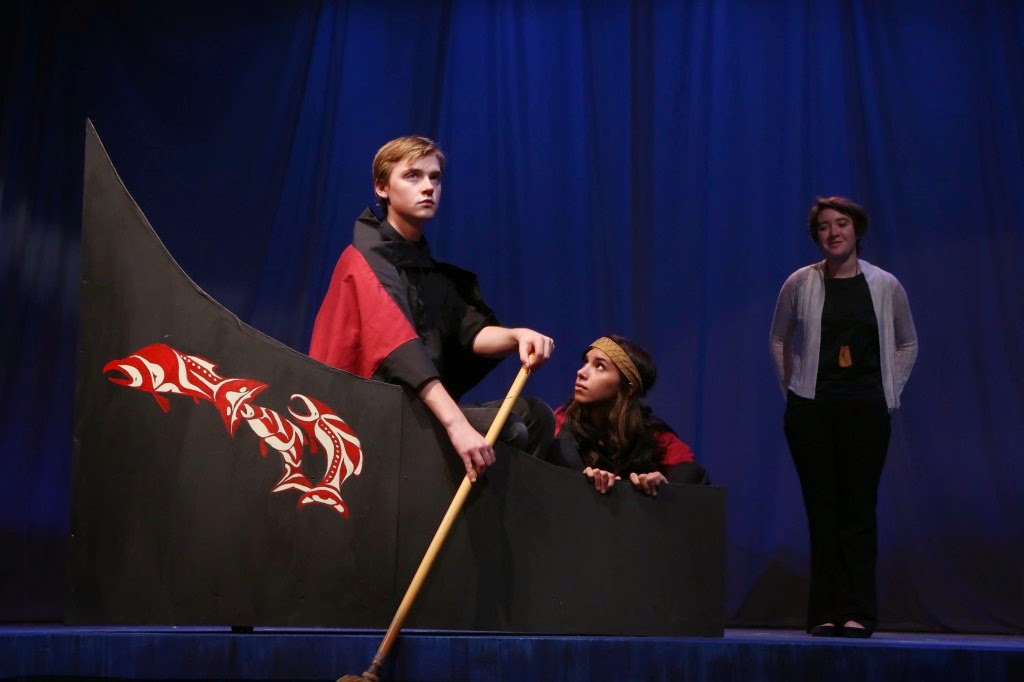 Acme Theatre Company is presenting “The Rememberer” by Steven Dietz at the Brunelle Performance Hall at Davis High School through Sunday, Aug. 10.

“The Rememberer” tells the story of Joyce Simmons Cheeka, a member of the Squaxin tribe from the Southern Puget Sound area who, in 1911, was removed from her family and placed in a government-run Tulalip Indian school, where she is forced to give up her own language and the customs of her people in order to be “Christianized and civilized.”

The Indian boarding school movement began in this country after the Civil War. The Tulalip School was established in 1868 with only one dormitory, but by 1907 the school had a capacity enrollment of 200 students, ranging in age from 6 to 18.

The schools across the country reached peak enrollment in the 1970s, with 60,000 students enrolled. However, due to reports of abuse occurring in such schools, enrollment began to decline and by 2007, most of them had been closed.

In preparation for telling Cheeka’s story with respect, director Emily Henderson explains that a small group of students — the Dramaturgy Team — met regularly to study the Indian Boarding School system, the history of the Pacific Northwest and the Squaxin culture. This team then designed a series of weekly workshops to share the information they gathered with the rest of the cast.

I think the end result is a presentation that would make Cheeka proud. “The Rememberer” is the story of one woman’s journey through two worlds and the way she learns to weave them together.

As with too many Acme productions over the years, this play suffers from poor projection on the part of too many of the actors. While some of the more experienced actors did a wonderful job of getting their words out to the audience, some others, while getting the mood of a scene just right, tended to lower their voices, making it almost impossible to hear what they were saying.

Still, I was able to follow the story of young Joyce, who manages not only to learn the ways of the white man, but still honor her own heritage by becoming the “rememberer” for her tribe, the keeper of tribal history and lore.
Eden Tomich is the adult Joyce, who acts as a narrator for the play and who moves around the bare stage with the dignity of her character, remembering the time when she was young, learning the lessons of her people from her grandfather, Mud Bay Sam (Wil Forkin) and grandmother Emily Sam (Meili Monk).

The death of the grandfather is particularly touching because Joyce realizes that the job of being the “rememberer” now falls to her; it is what she was trained to be.

As the young Joyce, Camila Ortiz plays the role with a gentle dignity, a spark of fire as she speaks up for her rights, and always giving her character a nobility far beyond her years.

Andres de Loera-Brust was outstanding as Dr. Buchanan, the physician who founded the Tulalip School and also served as Indian agent for the reservation. He was empathetic, while still maintaining firm control of his students. He shows Joyce there can be kindness in the white man’s world.

Brian Stewart also turned in a strong performance as Mr. Conrad, the teacher you love to hate, in a battle of wills and ideology with a stubborn Joyce.

Cassidy Smith was the stern Superintendent who espouses the philosophy that you must “kill the Indian to save the man,” and Megan Kraft was Miss Brennan, the sewing teacher who won’t let Joyce sew a fish on a quilt, while Danielle Schlenker is the nurse who is more gentle and sympathetic to her young charges and who makes Joyce her assistant during a flu outbreak at the school.

Trevor Rinzler is a young Indian boy whom Joyce comforts while Chris Farmer is Henry, Joyce’s cousin whom she loves to tease.

A cast of nearly 40 actors bring this story to light, on a multi-level, mostly bare stage, but with nice touches such as the sinks at which the school girls line up each day to brush their teeth. Nice job by designer Brian Stewart.
The lighting design of Wil Forkin added greatly to the mood of the piece.

After 33 years, I despair of ever having an Acme show where projection is uniformly good, but I do wish it had been a bit better with this piece. Still, despite losing so many bits of dialog, this was an excellent production, giving an education to the audience about a piece of history of which we may not have had much knowledge before.
The members of Acme, and especially director Henderson, have done themselves — and Joyce Simmons Cheeka — proud.
Posted by Bev Sykes at 7:18 AM