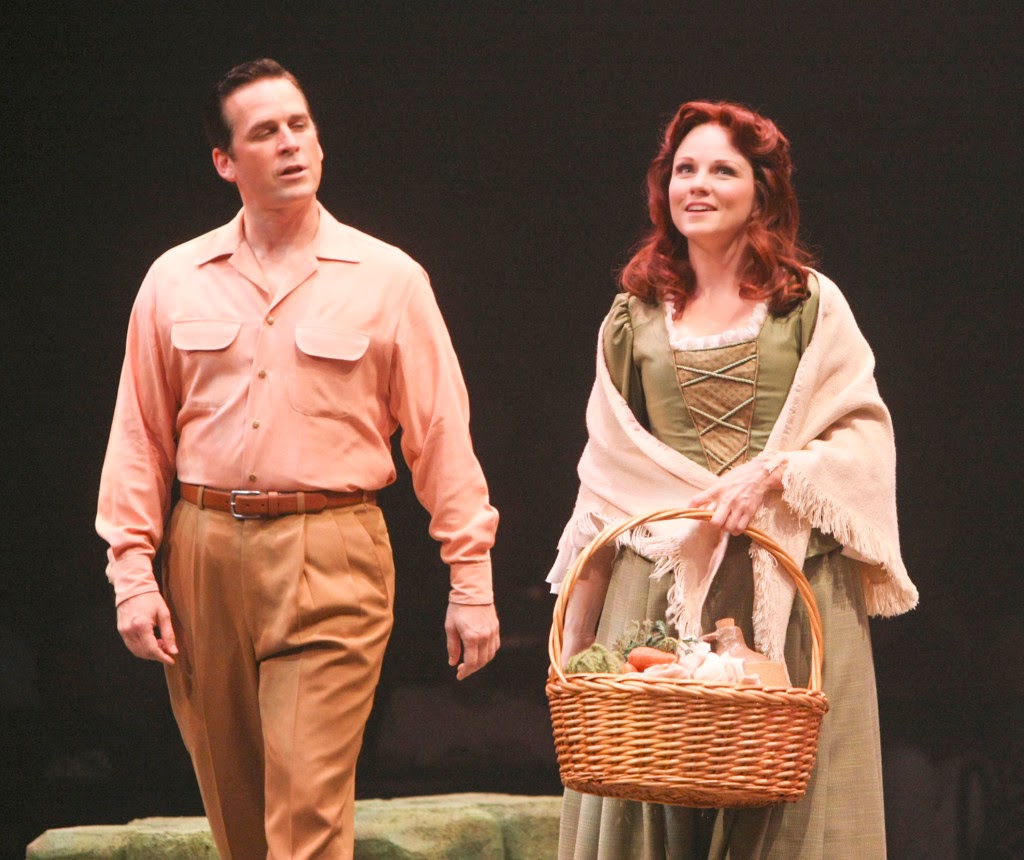 What is set in 18th-century Scotland, is filled with Highlanders in kilts with sporrans and swords, has lads and lassies in love with one another, bagpipes, hills of heather, good Scottish whisky … and was not written by Diana Gabaldon, author of the historical science-fiction adventure-romance “Outlander” series?

Brigadoon is a magical 18th-century Scottish village which, thanks to a 200-year-old miracle, rises out of the mist for one day every 100 years. Americans Tommy Albright (Robert J. Townsend) and Jeff Douglas (Jason Graae), lost on a hunting expedition in the Highlands, stumble across the village and, unaware of anything unusual, get caught up in the lives of the citizens.

Tommy is engaged to Jane back in New York but something is missing. He’s been looking for that elusive something that will make his life complete.

In Brigadoon, Fiona MacLaren (Jennifer Hope Wills) is “waiting for her dearie,” a man to complete her, who doesn’t seem to be among the local populace.

It’s almost, but not, quite love at first sight for these two as they gather heather on the hill for the wedding of Fiona’s sister.

Townsend’s Tommy is reminiscent of “Mad Men’s” Don Draper, tall and somewhat distracted, with his reserve melting as he finds himself attracted to this lovely lass he has just met.

Wills is a lovely Fiona. Her red hair gives a roundness to her face and you just know she must have freckles. She believably falls head over heels for this stranger and they have some beautiful moments together.

As Tommy’s sardonic friend Jeff Douglas, Graae has no depth of character, is bored with life and can’t understand Tommy’s attraction to Fiona. However, he has caught the eye of Meg Brockie (Tory Ross) and they have some funny moments together.

Ross is a lusty, larger-than-life Meg. She is very funny whether describing her mother’s wedding day or determined to woo and win some sexual favors from Jeff by describing to him “the real love of her life.”
Fiona’s sister, Jean, is beautifully played by Courtney Iventosch. As the story opens, it is Jean’s wedding day and the whole village is preparing for that evening’s wedding. Iventosch is positively ethereal as she dances with the other women and with fiancé Charlie Dalrymple (Brandon Springman)

Charlie is head over heels in love and can’t wait for his wedding (“I’ll Go Home with Bonnie Jean”).

Harry Beaton (Luke Hawkins) is the only person in the village unhappy about the wedding because he is in love with Jean himself and, because of “the miracle” he can’t leave Brigadoon without destroying everyone, so he’s stuck watching the woman he loves be so happy with the man she loves. Hawkins is dark and brooding, as befits his character.

Harry’s dad Archie (Ron Wisniski) is the village tailor, trying to unsuccessfully draw Harry into the business, while Rich Herbert is Andrew MacLaren, the father of the bride, thrilled to be hosting her wedding.

Gordon Goodman is Mr. Lundie, the village schoolmaster to whom Fiona brings Tommy and Jeff so he can explain “the miracle” to the two men.

There are wonderful moments in this show, such as the dance of the sword dancers (Eric Anthony Johnson, Adam Lendermon, Steve Schepis, Brian Steven Shaw and John B. Williford), performed at Jean’s wedding. It is amazing that they can dance in such tight spaces with such precision, and without glancing down at their feet in relation to the swords.

Special mention also needs to be made to bagpiper Josh Brown, who accompanies the body of Harry back to the village. If you love a good bagpipe (as I do), it was wonderful to hear.

Back in New York, Karen Hyland is Tommy’s fiancée Jane Ashton. Having seen Tommy fall in love with Jean, it’s difficult to see what he found appealing in this social-climbing ice cube and very easy to understand what “something” was missing for him in their relationship and why he is willing to risk everything to try and find it again.

Brigadoon presents a contrast between empty city life and the warmth and simplicity of the country, with the message that love is love even when there are centuries separating the lovers, which brings this review full circle and back to Diana Gabaldon!