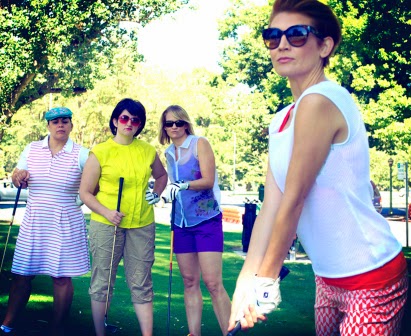 Everyone has secrets. That seems to be the takeaway message from the very funny Norm Foster play “The Ladies Foursome,” now making its American premiere at the B Street Theatre, under the direction of David Pierini.

Foster is Canada’s most-produced playwright, with B Street staging several of his plays for American audiences. He has had more than 40 plays produced on professional stages and has been compared to American playwright Neil Simon. He is a master of writing everyday dialog and finding the meat of very simple situations, like friends meeting for a round of golf.

The current production is not a female version of Foster’s “The Foursome” — which also premiered at B Street — but it did inspire the current comedy, following four women as they navigate the ups and downs of life on the links.

Three friends meet for a memorial 18-hole round of golf in honor of their friend, from whose funeral they have just come. Catherine died suddenly of a freak accident. The four women have played golf together every week for the past 14 years and believe this is the perfect way to honor her memory.

Margot (Amy Kelly) is a successful businesswoman, a workaholic whose dedication to her business has lost her both her husband and her daughter. She’s the down-to-earth, practical one who tells it like it is. She really hates golf, “but where else can you drink this early in the morning and people think it’s normal?”

Tate (Tara Sissom) is a stay-at-home mom of three, locked in an unhappy marriage to a physician. Her hormones are raging, but her sex life leaves a lot to be desired. Tate has unfulfilled dreams and fears she may have “frittered away her life.” She is the most empathetic of the group. It is she who thinks that “something” should be said before they tee off, and then wonders if it’s going to be religious and if that means she should remove her visor.

Connie (Melinda Parrett) is a popular local news anchorwoman who has no lack of sex in her life. She’s tall and beautiful and knows it. She’ll flirt with anyone, anywhere, and throughout the game we learn a lot about her sexploits, yet she never discusses her big secret.

For this memorial round they are joined by Dory (Shannon Mahoney), another of Catherine’s friends, a stranger to the other three, but someone who apparently has known the deceased quite well, as Catherine spent two weeks each year in the wilderness at the Lake Arrowhead Inn run by Dory and her husband.

As they play through each hole (great kudos to the sound effects person!) they discuss life, love, men, sex and careers. They even discuss religion “God’s a man. The Bible says He rested on the seventh day. A woman wouldn’t rest on the seventh day. She’d say ‘I need to reorganize that closet.’ ”

Dory’s relationship with Catherine (whom she calls Cathy, though the other women thought their friend hated to be called Cathy) was quite different from the other three and she seems to know a lot about her that the others never realized.

There are a lot of laughs in this tightly written, fast-paced comedy, and tucked among the laughs are secrets that will be revealed before the end of the play. There is a dark side to the comedy, which gives the play its depth.

The strongest character in the play is Catherine herself, the relationship each of the women had with her, and the effect she had on their lives.

This is a delightful play that will have audiences laughing heartily and perhaps fighting back a tear or two as well.
Posted by Bev Sykes at 11:00 PM