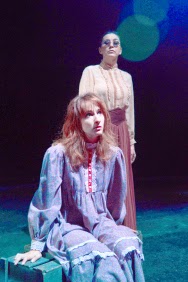 I will admit to having some concerns when I learned that Emily Jo Seminoff was going to be playing Helen Keller in the Woodland Opera House production of William Gibson’s “The Miracle Worker.”  I have watched Ms. Seminoff move from talented child actor into adult roles and I wondered if she could pull off the role of the young Keller child.

I need not have worried.  This talented young lady made the role her own and her age and height were irrelevant  She was Helen Keller.

Every bit her equal in the role of Annie Sullivan, the young woman hired to teach Helen, was Patricia Glass, whom Opera House faithful may remember as Miss Tweed in the recent “Something’s Afoot.” Glass’s Annie is full of spunk and fire and, despite her inexperience, is willing to fight for her pupil. She is passionate about giving Helen every chance to fulfill her potential, despite her handicaps.

(I once had a friend who was blind and deaf and who insisted she was not “disabled,” but merely “handicapped, like in golf.”)

The intense battle scenes between Helen and Annie, as the latter attempts to teach her pupil manners and to try to get her to understand the concept of “words” were wonderful and must have left both actresses exhausted.

A scene in the Keller dining room in particular, which ends act 1, owes much of its effectiveness to set designer John Bowles, who has created such a solid set that bodies falling against walls or doors or knocking over tables and chairs works so well that nobody so much as shakes and the furniture withstands the abuse it takes.

The whole set by Bowles is a marvel, on that small opera house stage, since it is designed on several levels, including an upstairs bedroom, and a downstairs area later used as a detached cottage where Annie and Helen spend 2 weeks alone together.  While things are cramped, they still all work wonderfully.

The supporting cast all handle themselves well.  Richard Lui as Captain Keller, who loves his daughter, but, along with the rest of the family, makes too many allowances for her bad behavior, which undermines Annie’s work with the child. He is frustrated that Annie doesn’t have her under control in a matter of an hour or two on her first day.

Sara Wieringa gives a lovely performance as Helen’s mother Kate, whose love for her daughter is palpable, even as she fears some guilt over Helen’s condition.  She vacillates between wanting to support Annie, but hating to see Helen suffer under Annie’s stern hand.

Anthony Raddigan makes a striking, sardonic James, the only person  in the family who sees that Annie’s approach to the girl is vital to her progress.

In smaller roles are Emily Delk as Aunt Ev, Melissa Dahlberg as the maid, Viney, and Belle, a specially trained and certified Assistance Dog from Canine Companions for Independence , who plays Helen’s dog Lacey, and handles herself very professionally on stage.

The audience is taken on such a roller coaster of emotions in this production, directed by Dean Shellenberger, that when Helen finally “gets” the notion that things have words and words have meaning, there was a lot of sniffling and wiping of eyes in the audience.

Annie Sullivan went on to live with Helen Keller until her (Annie’s) death in 1936.  Helen’s list of accomplishments as an author, lecturer (she eventually learned how to speak), and political activist is impressive.  She was one of the founders of the ACLU, campaigned for women’s suffrage, labor rights, and birth control. She died in 1968 and was inducted into the Alabama Women’s Hall of Fame in 1971.

One wonders what might have happened to that blind, deaf, out of control little girl if there had not been an Annie Sullivan in her life.