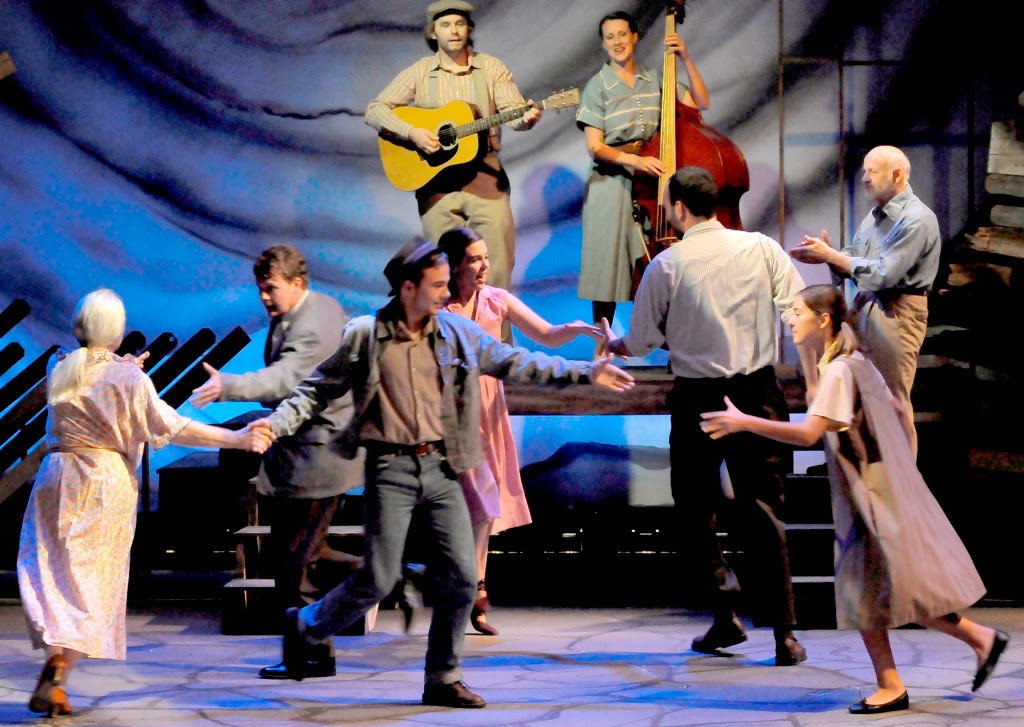 John Steinbeck’s “Grapes of Wrath” is celebrating its 75th anniversary. The Sacramento Theatre Company, the oldest professional theater company in Sacramento, has chosen the Steinbeck classic to open its 70th season, a season dedicated to “Legends, Epics and Icons.”

STC gives us a powerful production, with all of the emotion of the original book, thanks to a talented cast and the original period-style music of Sam Misner and Megan Pearl Smith of Davis, who also appear as several characters throughout the show.

The adaptation of Steinbeck’s story is by Frank Galati; it won a Tony Award for best play of 1990.

“The Grapes of Wrath” is an epic tale of one family’s enduring spirit in the face of incredible hardship. Set during the Great Depression, the play follows the Joads, a family of tenant farmers who are driven from their Oklahoma home to California due to drought, economic hardship and agricultural changes incited by the Dust Bowl of the 1930s.

Was there ever a more perfect time for the revival of this story? The climatic change was the yearly dust storms that rolled across The Plains, killing off crops and making the soil uncultivatable; the migrant workers of the 1930s were “Okies,”coming from Oklahoma to California on the promise of farming work, as welcome then as are today’s Mexican migrant workers; and haven’t there always been heartless bankers ready to foreclose on a family’s mortgage in order to line their own pockets?

Kirk Blackinton is Tom Joad (the Henry Fonda role in the 1940 movie), recently released from prison after killing a man in self-defense, and returning home to find that his family homestead is abandoned. With the house slated for demolition by the mortgage holder, the family has packed up and decided to move to California, where they have hopes of jobs and better living conditions.

As the play progresses, Tom, a good man, who at first just wanted to reunite with his family and resume his life, becomes more and more filled with rage as he and his family are beaten down by a system that seems to target the poor for extra punishment. There are messages here for the revolutions we see around the world today.

En route home, Tom meets Jim Casy (Kurt Johnson), a preacher who has lost his faith and now is a wanderer, getting help where he can. Casy becomes the moral voice of the piece, Johnson giving a flawless and riveting performance.

Heading up the Joad family are Matt K. Miller as Pa Joad and Laura Kaya as Ma Joad. Miller’s character is stoic and subdued while Kaya’s character is the heart of the piece, fighting for her children and hanging on to the belief that if they just work hard enough, things will be better.

Granma Joad is played by Vada Russell as a crusty old woman, devoted to her ailing husband (Phillip Ryder). Ryder later appears as the mayor of Hooverville.

Alissa Doyle is “Rose of Sharon,” the newly married, newly pregnant young daughter, who endures more tragedy than most people many years older, with the desertion of her husband and the death of her baby. In the end it is she who brings a semblance of hope to everyone. It is a delicate and lovely performance.

Misner and Smith each take several roles, including adding music to the piece. Misner is particularly moving as the “Man going back,” giving up on the promises of a better life in California.

Smith gives a marvelous performance as a 1930s version of a born-again Christian. She also appears as other anonymous members of various groups that the Joads meet along their journey.

The young Joad children are from the STC Young People’s Company, each role double-cast. Opening-night performances were by Owen Larson (alternating with Elliott Thomas West) as Winfield Joad and AJ Welker (alternating with Haley Finerman) as Ruthie Joad.

We really want things to improve for the Joad family, for something promised to actually come to pass, but it never does. However, the important thing is the family love and loyalty that binds them and their indomitable pride and dignity, which appear unsquashable.
Posted by Bev Sykes at 4:33 PM