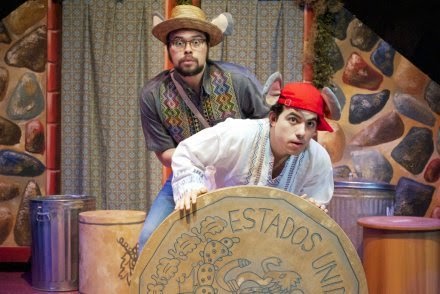 There were a lot of happy, excited children at the opening performance of the new B Street Theater Family Series production, “Dia de los Cuentos.” I had a great view of one little guy, about 5 years old, who sat and watched intently, clapped enthusiastically, talked back to the performers and just about turned himself inside out with delight at the parts that he liked.

“Dia de los Cuentos” (a day of stories) is the 161st original play written by B Street (46 in the Family Series alone) and the first collaboration among B Street writers Buck Busfield, Jerry R. Montoya and David Pierini.

It celebrates Mexican-American folk tales, in celebration of California’s Latino influence. The four stories (a fifth was removed from the production due to union restrictions on length for theater for young audiences) dramatized the myths and fables that remain at the heart of Latino culture.

The multicultural ensemble cast — Nestor Campos Jr., Amy Kelly, Joel Ledbetter, Dena Martinez and Armando Rivera — worked well together and nicely engaged the children in the audience.
Scenic design by Samantha Reno consisted of a few pieces, mostly two large staircases, that were able to be moved around to represent several scenes and sites, with the addition of a table here, a bed there and a few other pieces.

Costumes by Paulette Sand-Gilbert were over the top and brightly colored, to appeal to children. Perhaps the most clever and most colorful was a parrot costume for Dena Martinez, giving her not only a very colorful costume, but gloves that resembled claws, so that when clutching a branch, she looked for all the world like a parrot on her perch.

The stories began with “Pepito the Mouse” (author credit to Montoya), which explains how the tradition of the tooth fairy came to be. Rivera took the lead as Pepito, a mouse who causes his father (Campos) to lose a tooth. His ingenious solution to help his father continue to eat food started the practice of taking teeth from under the pillows of sleeping children and replacing them with something else of value.

“The Legend of Popocatépetl and Itzaccihuatl” (written by Pierini) is a mouthful and even after hearing “Popocatépetl” many times throughout the play, I’m still not sure I can pronounce it as fluently as the cast.

This play explains something that many mountainous locations take for granted, that a beloved mountain peak (like Mount Tamalpais) is really the sleeping body of a princess or a prince. Popocatépetl (Ledbetter) is in love with Itzaccihuatl (Martinez), but goes off to war against the Aztecs, hoping to return victorious, to ask her father (Campos) for her hand in marriage.

But a jealous young man (Rivera) carries the message that Popocatépetl has been killed in battle, thinking that if he professes his own love to Itzaccihuatl she will marry him instead. His plan backfires and in a Romeo and Juliet-like finale, not only is Itzaccihuatl lost, but Popocatépetl as well.

Rivera becomes a B’rer Rabbit-like bunny in “Rabbit and Coyote” (by Busfield), a zany crowd-pleaser filled with slapstick comedy and chase scenes as the clever rabbit outwits both the wily coyote (Kelly) and the hunter (Campos) looking to have hassenpfeffer for dinner. It explains why coyotes howl at the moon.

The show closes with “The Parrot and the Firewood,” with Martinez as a wonderful parrot, owned by a mean old woman (Kelly) and her very sweet, hen-pecked husband (Campos). How the parrot makes life better for the husband offers an unexpected twist, that will have children cheering and  adults laughing.

These shows are designed for children 5 and older, and judging by my little 5-year-old friend in the front row and the two retired women sitting next to me, it is certain to delight all ages.