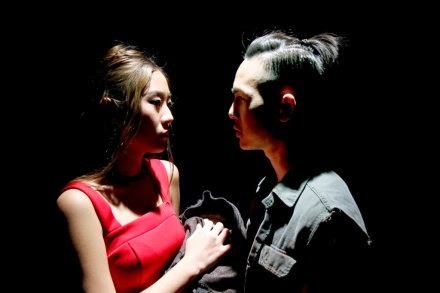 Woyzeck is the original bad luck kid.  Poor guy can’t get a break to save his soul.

Woyzeck is the subject of the sumptuous play, directed by Granada Artist in Residence Bob McGrath, currently on the UCD Main Stage.  Written by Georg Büchner, and unpublished at the time of his death in 1837, at the age of 23, it is one of the most performed and influential plays in the German theater repertory.

“Woyzeck,” “an investigation of desire, exploitation and madness,” is known as the first great drama to feature a member of the working class as the central character and is hailed as a masterpiece of expressionist theater, years ahead of its time. It deals with the dehumanizing effects of doctors and the military on a young man’s life.

The play is based on the true story of Johann Christian Woyzeck, who murdered his mistress in 1821. At the trial, his defense was that he had experienced hallucinations and paranoid delusions, but the court decided that he was ultimately in control of his actions and the man was executed in 1824.

Though there have been many translations and interpretations of this ground-breaking play, the current production is adapted by Neil LaBute, a playwright famous for his black humor and violent tales in which often women run afoul of men with borderline personality disorders.  In this production, there are fewer characters, and fewer episodes than in the original, but the mad, intense quality remains.

Hien Huynh gives a masterful performance in the title role.  A movie, directed by Werner Herzog, portrays Woyzeck as somewhat of a simpleton, while McGrath’s hero has principles and dignity, even as being the victim of the experiments of a sadistic Mengle-like physician (Michael Harris), who insists that his patient eat nothing but peas.

At the same time Rose Kim is a strong Marie, Woyzeck’s common-law wife.  She is wildly sensual, though tender as a mother.  She taunts Woyzeck with her attraction to the Drum Major (Taylor Church).

Harris is a powerful Doctor, using Woyzeck as an example to his students as he lectures to them in the operating theater.  He also plays a carnival barker, putting a horse through its paces.  The comparisons between the hapless Woyzeck and the trained horse are clear, though the horse is better able to express how he feels about being so used (one of the funny moments in the otherwise bleak show).

Likewise David d’Olimpio is overbearing and dictatorial as the Sergeant who does his best to make Woyzeck’s life a living hell.

Special mention should be made of Karl Uriza, as “Karl,” a disembodied head offering comment on the action going on on stage.  His delivery was, to say the least, “unique.”

McGrath has set the action for this production in the China of the 1930s, as represented by slides and video projected onto a scrim in front of the action.  (Projections are by Joan Grossman).  The projections very effectively create the world of the proletariat and its abuse under those in power.

Projections are also used to create scenes, such as a door, or an apartment so that the play can progress with minimal pieces of scenery and still have that rich feeling of a full stage of scenery, though watching all of the action through a scrim does remove a layer of intimacy that one gets in other types of theater.

The often discordant mood music is by David Lang, who manages to create both the strident tenor of the times and the progression of Woyzeck into madness.

Woyzeck has been called the single most influential play of European theater and the beginning of modern drama.  Yet, it is rarely performed.  U.C. Davis is fortunate, indeed, to have the opportunity to  present this work, and happily it done extremely well.
Posted by Bev Sykes at 10:00 PM