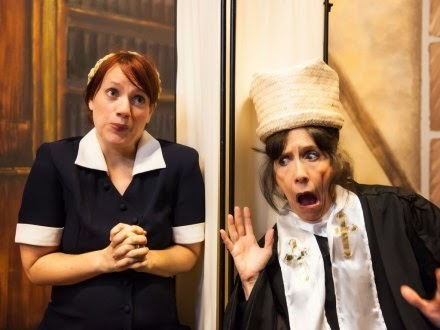 When playwright Leslie Lewinter-Suskind was a graduate student at the University of Oklahoma, she wrote a play called “Italian Opera,” which won an excellence in play writing award.

Fast-forward through marriage, four children, nine grandchildren and travels around the world, and now the play has been rediscovered and graces the theater at California Stage, under the direction of Ray Tatar.

Why this gem of a comedy-with-music has lain dormant lo these many years is anybody’s guess, but how lucky we are that it has finally been revived to be enjoyed by Sacramento area audiences.

This is a farce that lampoons all of the excesses of elements of Italian opera, particularly of the 19th century. There are divas, love, affairs, murder, suicide — all that fun stuff that makes opera so enjoyable.

Everything about this production is perfect, starting with the set, designed by Niels Larsen and constructed by Buzz Weitz, a large living room with interchangeable pieces that turn it into a different luxury villa (a pillow, a hat rack, a floral arrangement, family photos). Funny and clever.

Then there is the dream cast, talented actors and singers all. Katherine Cooper is Lucrezia, barren wife of the sterile Mario (Jonathan Blum), having an affair with Nemorino (Michael R.J. Campbell), the philandering husband of Vestalina (Naomi Wilson), the mother of his nine children, all of whom look like their father.

And there is Janet Motenko, delicious as either the maid Zerbinetta or the maid Berta, depending on whose villa is being featured. Her performance as narrator and everything else (including parish priest) is so wonderful it has to be seen to be believed.

The costumes, from the 1930s era (designed by Jeanette Trimble), are perfect. Most wonderful is the costume switch from Zerbinetta to Berta and back again, which brings laughter every time.

There must be a plot to drive the action and give a reason for characters to break into song. Lucrezia discovers she is pregnant by Nemorino, but because she has not been intimate with her husband for more than three years, it’s going to be difficult to pass the child off as his.

The lovers conspire for ways Lucrezia can seduce her husband but hilarity ensues when Vestalina begins to get suspicious, and Mario reveals his own shameful secret.

The songs, also by Lewinter-Suskind (arranged by Peter Kagstrom and David Taylor and played by Jane Fanucci on the piano), are perfect examples of what you might hear in a real opera, from romantic arias to humorous duets and emotional death scenes. (It’s opera; of course everybody dies!)

In fact, the final death scene had me wondering, as Vestalina leaps to her death, if the whole thing had been a shaggy dog story.

The play is very funny, well crafted, wonderfully acted and a real treasure that I hope large numbers will come out to see. You don’t need to know (or appreciate) opera to enjoy this play. It stands on its own as a unique comedy with music.
Posted by Bev Sykes at 10:07 AM