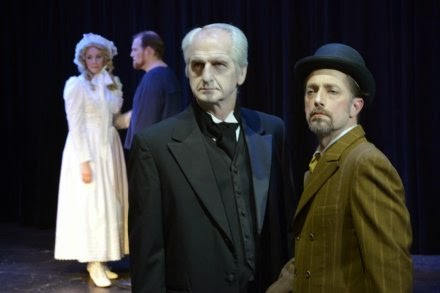 When you look through your program and see that the production you are about to witness has a “blood manager” on the tech crew, you have a pretty good idea that it’s going to be messy.
Indeed, Davis Musical Theatre Company’s current production of Stephen Sondheim’s “Sweeney Todd, the Demon Barber of Fleet Street” lives up to that promise. This dark tale of kidnapping, rape, murder and cannibalism doesn’t have a lot of laughs (though they do manage to find one here and there).

Director Steve Isaacson (who is also musical director [with Jonathan Rothman], set designer and lighting designer) has created a first rate cast who do justice to this Sondheim classic.

John Haine plays Benjamin Barker, a young barber sent to a penal colony in Australia on false charges because the infamous Judge Turpin (Nathan Lacy) had designs on his wife, whom he kidnaps and rapes. Barker has now returned to London, under the name Sweeney Todd, and seeks revenge on the man who destroyed his family.

He returns to the apartment he shared with his wife and infant daughter and is told by the landlady, Mrs. Lovett (Cyndi Wall), that his wife committed suicide and daughter Johanna (Jori Gonzeles) is now a ward of Judge Turpin.

Mrs. Lovett, who runs a bakery under the apartment and bakes what she admits are “the worst pies in London” reveals that she has kept his barber tools and produces a box of shiny razors. An idea is born, and Todd sets up his barber shop once again, hoping to lure his enemies to his chair, and to use his blades, and then kill them.

The affable Mrs. Lovett, never one to let opportunity pass her by, hates to see all that good “meat” go to waste as Todd begins his killing spree (“Seems an awful waste… / I mean, with the price of meat / What it is, / When you get it, / If you get it…”) and so they work together to improve the quality of her pies, which soon become the talk of London.

Their duet, “A Little Priest” is one wonderfully macabre moment of lightness in an otherwise very dark musical. Wall is delightfully coquettish as Mrs. Lovett, enjoying her new-found success as a pie baker, and attempting to woo Todd and move him out of London.

Haine is a surprisingly charismatic Sweeney Todd, filled with rage, but you can’t help but feel his pain and root for him with each throat he slits. Those who surround him are so much more evil that we feel empathy, we care about him, and we hope for his success in avenging the terrible things that were done to him.

One might have hoped for a tad more volume from Haine, but he gives a wonderful performance.
F. James Raasch is Anthony Hope, a sailor who rescued Todd at sea and who falls in love with Johanna. He has a steady, strong voice and a great presence on stage. His relationship with Johanna is touching.

As for Gonzales, she is a beautiful, innocent Johanna with a lovely voice, who has a chance to shine in “Greene Finch and Linnet Bird,” and sing a beautiful duet, “Kiss Me” with Anthony. The two are symbols of goodness in the evil world that surrounds them.

Also important to the plot is the beggar woman (Eimi Taormina), who seems to be the only one aware that terrible things are happening in the pie shop, but her mind is so far gone, nobody will believe her. Taormina gives an outstanding performance, displaying a strong voice and an ability to go mad in memorable fashion.

Outstanding in the minor role of Tobias Ragg, a simple young man who is devoted to Mrs. Lovett, is Joshua Smith, whose final scene is one of the most poignant in the play, and who got the strongest applause at the curtain call.
The chorus deserves its own mention for its impeccable diction. The pasty-face makeup they seemed to be wearing, with the darkened eyes, made them look like they were auditioning for an episode of “The Walking Dead,” but they sang the heck out of their songs.

Mention also must be made of the new barber chair, designed by Tim Shockley, which is the central part of Act 2. A simple chair rigged to easily drop Todd’s victims into the bakery below was ingenious.

This is not a fun night of theater, based on plot, but based on execution, it’s a good way to spend the evening. Davis Musical Theatre Company has done it again.
Posted by Bev Sykes at 5:31 PM