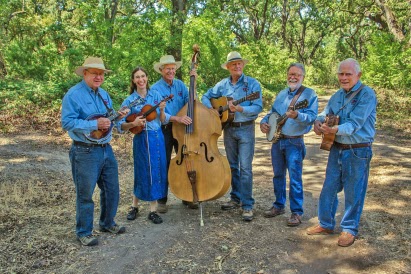 The Putah Creek Crawdads are throwing a party at 7:30 p.m. Saturday, March 28, at the Palms Playhouse in Winters to celebrate the release of their second CD, “Rolling On.” Their first CD, “Going Back” was released in January 2009, which was the last time I met with the group for an interview.

The Crawdads are an acoustic vocal and string band, which plays folk, Americana, gospel and bluegrass music. They have been playing around Yolo County and beyond for almost 50 years. Members reside in Davis, Woodland, Knights Landing, Winters and Arbuckle. They span an age range from 45 to 93. They often can be seen playing at the Davis Farmers Market, at Ludy’s Main Street BBQ in Woodland or at a host of charitable events to which they donate their time and talents.

There is disagreement about the exact start date of the group, but agreement that the distant genesis was a yearly gathering held by members of the Unitarian Universalist Church over at Dillon Beach, when everyone would sit around in the evening and sing music.

Marc Faye, a farmer from Knights Landing, remembers that he and the other three original members —Ray Coppock, Cap Thomson and Oliver “Chip” Northup — started playing together in the 1960s when hootenanny music was popular and everybody seemed to be playing guitar.

The Crawdads eventually grew to include: Coppock, a retired information specialist for the UC Ag Extension and the senior member; Thomson, former director of Yolo County Mental Health and former director of Sutter Center for Psychiatry; Wayne Ginsburg, a retired English and journalism teacher, who now acts as the band manager; Kate Laddish, the fiddle player who learned to play the fiddle in order to be a Crawdad; and Northup.

John Rominger joined the group in 2011, having returned to Davis after his retirement. He had been playing guitar with various groups, and as a solo keyboard performer in the Bay Area.
“I had known Marc and Cap for many years and when I was talking to Marc I made a comment about looking for someone to play music with,” Rominger said. “They invited me to play a few times and after awhile invited me to join the group.”
At a recent rehearsal at the Thompson home, band members discussed why they decided to put out a CD now.
“Well, we have a very fine guitarist (Rominger) now,” Thomson said, with Coppock adding, “All we had before was Chip and me … and we aren’t really guitar players.”

“We’ve reconstituted and we’re celebrating that,” Thomson said. “We love to make music, and we were grateful for the opportunity.”

“Reconstituted” refers, of course, to the tragic loss of Oliver “Chip” Northup, one of the original Crawdads, who had played guitar and taken many of the lead vocals for the group since its formation 50 years ago.

“After we lost Chip, one of the things we did, was substitute duets for Chip’s solos,” Coppock said.
“Chip had a wonderful memory for words and for music,” Thomson said. The group laughed, fondly remembering their friend, but in agreement that Northup was religious about never changing the key, never modulating, never straying from the original way a song had been performed.

“There are certain songs we don’t sing any more because they were all Chip. Songs like “Strawberry Run” … he’s the only one who knew all the words!” Coppock said.

“There were lots of songs that I never had a role in singing and thus never learned the words,” Faye added.

The group paused to specify that the dedication of this album reads, “We dedicate this album to the memories of Oliver “Chip” Northup and Claudia Maupin. Chip was our lead singer for 48 years (1965-2013), and the warmth in his voice matched the warmth in his heart and spirit. They were two of the most generous and giving people we’ve known. We miss them deeply.”

Ginsburg also talked about the value producer Keith Little has had in the Crawdad history and in the production of this album.

They met Little at a band camp and he became their producer, coach and friend. In fact, both CDs were recorded at the Crockett recording studio of Little’s singing partner, Jim Nunally.

“One of the things that really shows (comparing) our pre-Keith days and now is our understanding of arranging and the difference in what you can do when you are performing versus what you can do in a studio, in terms of what is happening behind the singing,” Laddish explained. “When you listen to our recording now versus when we first went into the studio in 2007 there’s a huge difference.”

They called this album “Rolling On” because they knew this is what Northup would have wanted — that the group keep “rolling on.”

In fact “Rolling on” is a theme which parenthetically encloses all of the 17 songs in this new album, which starts with a traditional bluegrass song, “I’m rolling on,” first recorded by Bill Monroe, the granddaddy of bluegrass, in a special Crawdad version.

The final song is Woody Guthrie’s “Roll On, Columbia,” recorded by the Crawdads in 2007, but never released until now. This version features Northup. “Chip’s voice, as you will hear, was something special,” the album cover states.

In between are popular tunes like Stephen Foster’s “Camptown Races,” and less familiar tunes like the instrumental “In Memory of Herbie MacLeod,” which features Laddish’s fiddle.

“Cap taught me the tune in about 2002, and we brought it to the full band when we were looking for an instrumental for this album,” Laddish said, explaining that it was inspired by the music of Cape Breton and was written by Jerry Holland in memory of Helen Thomson’s late father, Herbie.

After 50 years, what keeps these guys together is their enjoyment in playing together. Coppock remembers that he was told by Keith Little that the thing that drew him to the group in the first place was that they were the only group who had been together for a long time where the members all actually still liked each other.

Not to be found on this new album (but will be on the next CD, they promise) is a brand new song written for the Crawdads by John Rominger, which nicely traces the history of the group and sums up their popularity very well:

“Those crawdads have a knack for makin’ people want to smile.
They love to entertain their fans with a laid back down home style”

Come out to The Palms Playhouse on March 28 and get a preview of the new song, as well as the songs on the album. Let the Crawdads entertain you with their laid back style and let their music “soothe your mind.”