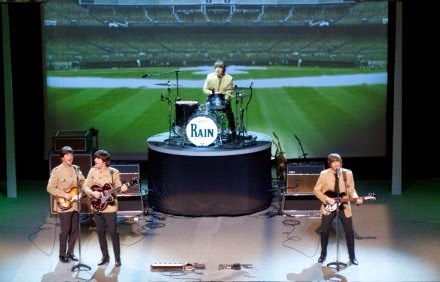 I had not seen that many arms waving the peace sign in decades.

The Beatles Tribute band, Rain, has returned to the Sacramento Community Center with a new and improved Beatles tribute, and the hundreds of ecstatic fans were screaming and whistling and clapping as soon as the lights went down, before the curtain even went up.

Their excitement was rewarded by a two-hour homage to the Fab Four by a group that has been celebrating The Beatles phenomenon for longer than The Beatles themselves actually were together (the Rain band started in 1975).

Aided by an incredible multi-media presentation using LED and hi-def screens, “Rain: A Tribute to the Beatles” takes the audience through Beatles history, starting with their appearance on “The Ed Sullivan Show,” through the Shea Stadium concert, into their psychedelic years and their final concerts together, becoming more socially conscious and working to “give peace a chance.”

Included in this updated tribute are songs The Beatles recorded in the studio, but never performed for an audience. It’s all music, with no scripted dialog, though there are some clever asides to the audience now and then.

The audience whistled and cheered, clapped, waved their arms, sang along with familiar songs, got up and danced and in general had a fabulous time, all the while waving at themselves projected large on the screen on stage at the grand finale.

All four of the performers in Rain — Joey Curatolo (Paul), Steve Landes (John), Joe Bithorn (George) and Ralph Castelli (Ringo) — also performed in various versions of the Beatlemania band. All were profoundly affected by The Beatles at an early age.

Castelli knew from the moment he saw Ringo Starr on “The Ed Sullivan Show” that he wanted to be a drummer. He not only toured as Ringo in Beatlemania, but also played Starr in “Beatlemania: the Movie.”

Bithorn likewise was smitten after watching the Sullivan show and took up the guitar. He toured with Beatlemania as George until he joined Rain in 1983.

Curatolo, who taught himself to play the guitar at age 10, toured with the Broadway production after winning multiple McCartney sound-alike contests.

Landes is a second-generation Beatles fan who also taught himself guitar at age 10 by listening to Beatles records. He also traveled with Beatlemania and joined Rain in 1998.

The four are joined by keyboardist Mark Beyer, to fill in not only piano sounds, but also, when necessary, violin, harp and other instruments.

In the interest of full disclosure, I must admit that I was never a Beatles fan, so I cannot speak to the accuracy of arrangement or vocal imitation, though it all sounded pretty spot-on to me, and the audience loved it. These are talented musicians and they put on an amazing show.

The opening segment alone, with banks of TV screens showing clips from Ed Sullivan — the host and the group and then thousands of screaming fans in the audience — set the stage for what was to come.

Later, the Shea Stadium concert was given authenticity by a stage-wide projection of the audience at that concert that made you feel you actually were there in the stands looking at the audience on the other side of the field.

The clever introduction of period television commercials to entertain the audience while the group members change costumes was fun. (Who remembers that Fred and Barney were once spokespersons for Winston cigarettes?)

As the group hits the ’60s and ’70s, light shows enhance the psychedelic years along with “Yellow Submarine”-type animation.

What is best about this show for the audience is the shared experience, remembering back to those bell-bottom days. Everyone (except perhaps me) has their own memories of how they were affected by The Beatles and Rain gives them a chance to relive those days.

It doesn’t matter that these guys aren’t the real deal — they sound real, they look real and they sing the songs that became the fabric of our lives.