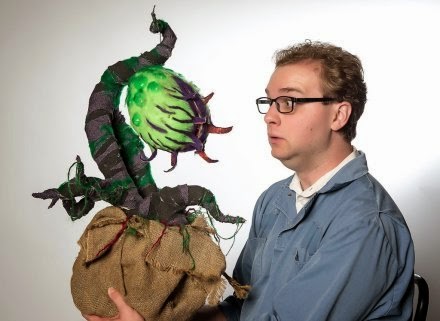 It’s always interesting when a director takes a new approach to a familiar show. Sometimes it works, sometimes not so much.

Based on the Roger Corman 1960 film of the same name, the musical “Little Shop of Horrors,” with book and lyrics by the late Howard Ashman and music by Alan Menken, had its world premiere off Broadway in 1982, where it ran for more than 2,200 performances.

The movie musical version, starring Rick Moranis and Steve Martin, was produced in 1986, and in 2003, “Little Shop of Horrors” hit the big time with a real on-Broadway production.
A new production, directed by Jason Hammond, opened last weekend at the Woodland Opera House.

“Little Shop” is the story of Seymour Krelborn (Spencer Alexander), a nerdy employee at Mushnik’s Florist shop, a failing business on Skid Row. Seymour, somewhat of an experimental botanist, bought an odd plant from a Chinese flower shop during a solar eclipse. He named the plant “Audrey II” to honor his colleague, Audrey (Christianne Klein), for whom he has tender feelings.

Audrey, however, is in an abusive relationship with a dentist Orin Scrivello (Dan Sattel), whose mother encouraged him to go into dentistry because of his love of inflicting pain.

Audrey convinces Mr. Mushnik (Gil Sebastian) to display Audrey II in the window of his shop and it begins to attract customers. But the plant soon starts dying because Seymour can’t figure out what to feed it. Accidentally pricking his finger, he then discovers Audrey II needs human blood to thrive.

Seymour is in the position of having to find more and more blood to feed his plant, while the plant grows to eventually practically take over the flower shop, when Seymour finally learns the terrible truth about her.

Traditionally, Audrey II is a large blob of fabric that has an opening through which food can be tossed. An unseen puppeteer manipulates the plant while its voice, sounding like the voice of Satan, booms out ominously from a speaker somewhere.

In this production, Audrey II looks more like — sorry I have to say it — a giant vagina, with a gaping opening through which the indomitable Deborah Hammond stands and sings as the voice of the plant. Though Hammond is definitely menacing, it just doesn’t give the same degree of horror as the original staging.
The actors, however, are excellent. Alexander is a wonderful nerd, uneasy, especially around Audrey. He’s uncomfortable in his new role as celebrity as the fame of Audrey II spreads. And he is both horrified and repulsed by the things he is willing to do to keep Audrey alive.

Klein is sweet as the ditsy Audrey who believes she is unworthy of anyone but an abusive male because she is a woman with “a past.” Yet she fails to recognize that Seymour is in love with her.
Actually, anyone would fall in love with her as she sings “Somewhere That’s Green,” her wistful wish for her perfect dream life. I liked that Klein used a Bronx accent, but didn’t go overboard with it, as some actresses do.

When Audrey and Seymour finally confess their feelings for each other, their duet “Suddenly Seymour” is a lovely break from all the horror going on in their lives.

Sebastian was an appropriately grouchy and blustery Mr. Mushnik, who rescued Seymour from a Skid Row orphanage and gave him a bed under the shop counter and allows him one Sunday off every two weeks. He is not above offering to adopt Seymour if it will ensure that he will keep Audrey II at the flower shop.

Doing his best to steal the show in the small, but important role of the nitrous oxide-sniffing dentist Orin Scrivello, Sattel is deliciously unlikable. A Michael Imperioli lookalike, Sattel is also able to transform himself rapidly into several other small roles, with several looks, including that of a woman.

The trio of doo-wop singers who act as a quasi Greek chorus throughout the show are Emily Jo Seminoff, Julia Spangler and Erin Bruni. They each get a moment to shine and display their strong voices.

Also, Lenore Sebastian appears in the small role of a Skid Row homeless woman. A consummate actress, Sebastian makes the most of her character, though she has no lines to speak.

Jason Hammond and Denise Miles are credited with costume design. Those for Audrey are particularly appropriate while the red gown for Hammond is stunning, and the transformation of the girls’ trio from drab Skid Row clothes to sequined dresses was fun.

Special mention should be made of the small orchestra — Jia-Min Rosendale, Dale Proctor, Scott Plamondon, Alex Rieff and Dave Gill — who provided the perfect accompaniment.

There is no great message in this show, unless it’s “if you find a strange plant which appears suddenly following a total eclipse of the sun, walk by and leave it alone.” But this musical is fun for the whole family.
Posted by Bev Sykes at 2:29 PM

Alien plant creature from another planet lands in New York to become a mutant hybrid flower of Venus fly trap & Sunflower an innocent plant transforms into a cannibalistic plant monster rampage human beings & civilians a young flower gardener named Seymour Krelbourn his main hero/protagonist try to destroy the plant & used the live wire electricity & killed the monster & the world is safe once again from the forces of evil & save the world his fiancée daughter of Mr Muschnik owner of the flower shop now gets married lived happily ever after the end. Story by Roger Corman American film director novellist & screenwriter now on wattpad & Youtube soon. Thanks for the information. From:Wayne

Seymour Krelbourne the hero/protagonist of the hit low budget film of 1960 created by Roger Corman in Little Shop of Horrors film series. Thanks for the information. From:Wayne

Audrey Muschnik only daughter of Abel Muschnik owner of Muschnik's flower shop he is also a businessman & boss of Seymour Krelbourne in Little Shop of Horrors film series. Thanks for the information. From:Wayne

Little Shop of Horrors the story set in Brooklyn New York in the 1960's era in film TV & media in Hollywood film history. Thanks for the information. From:Wayne

Audrey 2 the cannibalistic man eating plant from another planet the main antagonist/villain in the film series created by Roger Corman in Little Shop of Horrors. Thanks for the information. From:Wayne

Resemblance to plant monsters in film TV animated cartoons & media like Day of the Triffids Attack of the Mushroom People & Siopawman vs Kagat Puno became a pop culture sensation in literature & entertainment history. Thanks for the information. From:Wayne