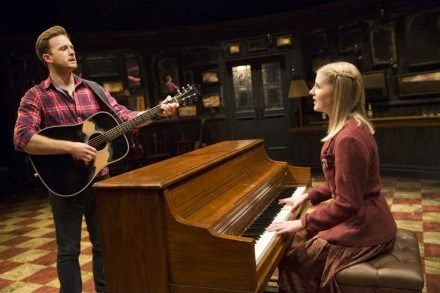 “Once,” with the book by Enda Walsh and music and lyrics by Glen Hansard and Marketa Irglova, is not your typical Broadway musical. It was based on the movie by John Carney, made for an unbelievable $150,000.

Proving that you don’t need lots of CGI or to spend billions of dollars, this low-budget film became a big hit and won the 2007 Academy Award for best song and the 2007 Independent Spirit Award for best foreign film. It also grossed more than $9 million in the United States alone.

In 2011, the New York Theater Workshop brought a stage version to Broadway. It opened to a sold-out extended run, and picked up eight Tony awards. Now “Once” has come to Sacramento and, judging by the waves of crowds flowing into the Sacramento Community Theater, it is going to be a mega-hit here, too.

The original songs from the movie are in the stage show, though the book has been expanded.

This is a quiet show that doesn’t hit you over the head with any message. There are no fancy tech pieces flying about, no glitz, no loud synthesized music. It’s a love story — or it isn’t — and it’s a joyous celebration of music and relationships between people, through making music together. Its brilliance is in the impeccable direction of John Carney, and in the wonderful performances of the actor-musicians.

The set is a Dublin pub, slightly more expansive feeling than a real Irish pub, but they have lots of stage space to fill. The set design is by Bob Crowley, who cleverly includes a large mirror behind the bar, which allows the audience to see both sides of conversations that take place at the bar itself.
The musicians start “jamming” about 15 minutes before the show actually begins and audience members are permitted to join them on stage to enjoy the music, both toe-tapping Irish tunes, and the less-well-known, but equally lively Czech music.

The show begins without fanfare and, in fact, you aren’t sure it has really begun until the lights in the theater slowly begin to dim.

The hero, identified only as “Guy” (Stuart Ward), is a disillusioned young musician whose girl has just left to go to America and who has lost his confidence in himself and his ability to write music that others want to hear. He’s about to give up his dream of a musical career and continue to work in his father’s vacuum cleaner repair shop.

The heroine, identified as “Girl” (Dani de Waal), is a Czech young woman who hears Guy sing his song of unrequited love (“Leave”) and is taken with his passion. She offers to let him clean the vacuum cleaner she just happens to bring into the pub and in return she will pay him with music. She is an accomplished pianist.

DeWaal is a quietly winsome yet vulnerable Girl and her optimism about Guy’s talent is hard to resist. Over the next week she forces Guy to believe in himself again, to get a loan from the bank to pay for a recording session and, over 24 hours, to record a CD. Though that may seem a bit far-fetched in reality, you really do believe that this could be possible.

Girl’s costume helps in keeping space between herself and Guy as, though they are obviously having feelings for each other, she keeps her hands in her pockets almost all the time. We find out why in time.

A huge part of what makes this musical work is the musician-actors. Every musician on stage is also an actor — and a dancer, dancing some wonderfully choreographed numbers (movement by Steven Hoggett). Particularly delightful is Benjamin Magnuson (who also plays the bank manager) dancing with his cello, with moves Woody Allen never thought of in “Take the Money and Run.”

Also delightful is Evan Harrington (guitar, percussion, ukulele) as Billy, the owner of the pub. He’s big and blustery with that wonderful hair-trigger Irish temper that adds such authenticity to his performance.

The only non-musician on the stage is Sarah McKinley Austin, as the child Ivanka. She is appearing in her first touring Broadway show and is adorable.

The final duet, “Falling Slowly,” with Girl at the piano and Guy on his guitar, is achingly beautiful and is at once a promise of a happy ending and a bittersweet reality of what might have been, and never will be.

This is an unforgettable musical and should appeal to everyone.