An Almanac for Farmers and Lovers in Mexico 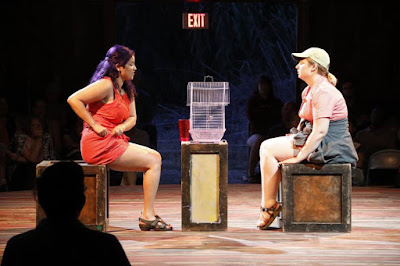 Kate Tarker’s “An Almanac for Farmers and Lovers in Mexico” — a magically lyrical and comical look at love, youth and true commitment — was a last-minute choice for Barnyard Theatre’s annual play. It is directed by Eden Tomich, with important lighting design by Andrew Buderi.

“We were looking for scripts and nothing really materialized that we were excited about,” said co-producer Steven Schmidt. We were just about at the point where we thought we won’t do anything this year when one of our young members brought in a script and decided to do it.”

They didn’t start rehearsing until four weeks ago, which is a very short time, when you consider that the historic Schmeiser Barn must be transformed from a working barn (with livestock inside) into a working theater, all the while rehearsing a show.

Judging by opening night, this does not look like a hastily slapped-together show. The acting is quite good, and the set, designed by Tomich, while simple, works well. The big round stage is just gorgeous, as are the multitude of paper lanterns that hang over the stage, lending a nicely diffused light to the action.

Flora (Rachel Pinto), an American anthologist working in Mexico, is getting ready to celebrate her wedding in two days, and this should be a joyous time for her were it not for one fact: Her fiancé Pele (Antonio de Loera-Brust) has been turned into a hummingbird and now lives in a cage, which Flora caries everywhere with her, trying to find a way to get him back in time for the wedding.

Pinto brings depth to her character, as she anguishes over the loss of Pele and the frustration of dealing with both the impersonal governmental regulations and the fates that seem stacked against her.

Kane Chai gives a stand-out performance as the sardonic San Cristobal (St. Christopher), the invisible guide for all the action that happens in the play. He has a twinkle in his eye and a smirk on this face as he watches Flora’s attempts to find a way to restore Pele to human form.

Brian Oglesby gives a wonderful performance as the impersonal judge who so manipulates his visiting hours to avoid Flora that she resorts to catching him at his home as he gets out of the shower.
Flora’s friends are Molly (Renn Andrews), Zoe (Sarah Green) and Henry (Matt Fyhrie, who provides comic relief). Along the way, everyone goes through a voyage of personal discovery, especially Flora and Pele (who does eventually appear in human form).

This is a one-act play without intermission.

(Please note: The play contains some strong language and two comedic scenes referencing sexual situations that may not be appropriate for all children.)

Barnyard Theatre is one of Davis’ lesser-known gems, and it’s well worth investigating. They even provide the mosquito repellent. And be sure to catch the Burma Shave-like signs that line the dirt road to the barn itself.

Labels: Almanac for Farmers and Lovers in Mexico, Barnyard Theater