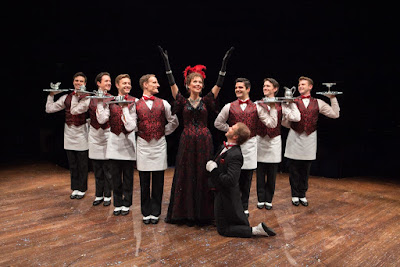 Everybody’s favorite matchmaker, Dolly Gallagher Levi, is at the Music Circus this week, and it’s nice to see her back where she belongs.

Jerry Herman’s award-winning “Hello, Dolly” burst onto the stage of the Wells Fargo Pavilion, and, despite it being the hottest night of the year (so far), the show was energetic and dazzling, and the action was non-stop (thank goodness the Music Circus tent was replaced years ago).

With direction by Glenn Casale, choreography by Randy Slovacek and costumes by Marcy Froehlich, this production is just stunning.

In the title role is Lynne Wintersteller, who seems a younger Dolly than we are accustomed to, but she is a take-charge, no-nonsense woman whose life is devoted to “arranging things” (like furniture and daffodils — and lives).

A widow of many years, Dolly has decided it’s time to get back into life and sets her beautifully feathered cap for curmudgeon Horace Vandergelder (Stuart Marland). Each of Dolly’s musical numbers is a show-stopper, perhaps most of all “Before the Parade Passes By,” an amazingly choreographed number that ends Act 1.

Marland, who played Mr. MacAfee in last season’s “Bye Bye Birdie,” is delightfully grumpy until he finally realizes that for all of his apparent dissatisfaction with Dolly’s work on his behalf, she’s really the only woman he actually wants to marry.

Vandergelder’s two store clerks, Cornelius Hackl and Barnaby Tucker, offer great comic relief and the story of their adventure in New York almost surpasses that of their boss and Dolly. John Scherer, as Hackl, in his 14th Music Circus show, has this wonderfully open face of a 43-year-old innocent who has never left Yonkers, and whose main hope on this adventure is to actually kiss a girl.
Jordan Grubb, as Barnaby, is the perfect bumbling sidekick, who follows Cornelius’ lead, but who is nervous about consequences Cornelius never even considers.

The two young men stumble into the hat shop of Irene Molloy (Jacquelyn Piro Donovan), and meeting her and her assistant Minnie Fay (Sarah Marie Jenkins) will change the lives of all four young people in a way they never imagined.

Donovan has a lovely voice that dominates in the poignant “It Only Takes a Moment” as she describes how her day with Cornelius has affected her.

Sainty Nelsen has the job of crying. All the time. Vandergelder’s niece Ermengarde wants only to marry her beau Ambrose (Justin Schuman), against her uncle’s orders, until Dolly steps in. Nelsen and Schuman are fun to watch in the dance competition at Harmonia Gardens restaurant, where everybody eventually ends up.

Of course, the Harmonia Gardens is almost a character itself, with its famous waiters, headed by Rudolph (John B. Williford). The dancing of the six waiters in the Waiters’ Gallop is stunning and when Dolly makes her entrance to the title song, well … you know you are seeing classic theater.
Put on your Sunday clothes and get yourself over to Sacramento and catch this delightful production while you have the opportunity. “Dolly’ll never go away again,” but “Hello Dolly” will be leaving at the end of the week.
Posted by Bev Sykes at 8:34 AM