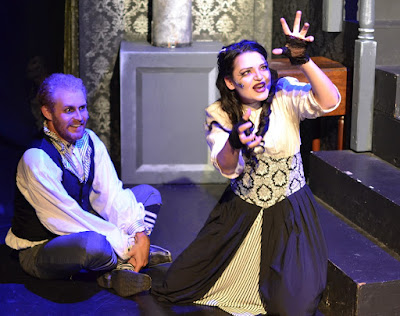 If Edward Gorey and Tim Burton were to collaborate on a show, it would “Nevermore,” by the Green Valley Theatre Company in its West Coast premiere, running through Aug. 28.

The full title is “Nevermore — The Imaginary Life and Mysterious Death of Edgar Allen Poe,” with book, lyric and music by Jonathan Christenson and directed by Christopher Cook. The author freely admits that he has “blurred the lines between fact and fiction” in creating the life of this iconic American writer.

This is an original, exciting, and yes, weird musical, which has an operatic feel in that there is minimal to no dialog and everything is either sung or given in recitative, somewhat like Poe’s writings itself. It is quite dark, but yet strangely entertaining.

Start with the beautiful set, designed by Cook. Green Valley has a small, intimate venue with a small stage, part of which is shared with the seven-piece orchestra. Yet Cook has managed to create a lush-looking interior room with a beautiful stairway to nowhere. It becomes several different venues with the addition of a couple of roll-on set pieces.

Add the wonderful Victorian-esque costumes of assistant director (and bass player) Meg Masterson and the choreography of Jacob Montoya.

Finally, add Cook’s creative puppets — “regular” puppets, imaginative shadow puppets and an unbelievable raven — and you have yet another layer of this remarkable musical.

A familiar name in the Sacramento theater community is Ryan Blanning, cast as Edgar Allen Poe. Blanning is surrounded by 13 other talented actors, each of whom plays many different roles, so nobody is identified by role.

However, a couple of names deserve identification, foremost among them Mark Ettensohn, who acts as a narrator throughout much of the play, and Sara Logan, who plays Elizabeth Poe, Edgar’s actress mother who actually died when Poe was a baby. She plays a big part in this fictionalized version of the writer’s life and establishes early on the running theme throughout the play, is that art as an immortalizing force.

Elizabeth’s death also sets up a number of losses in his life of women he loved dearly. It explains his morose “Annabel Lee,” for example — Elmira (Sidney Raey-Gonzales) in this version of the story. Indeed, we realize that had Poe had a happy childhood, we might never have heard of him.

The score is dark and spooky and relentless, with sudden breaks for truly wonderful songs like Poe’s song of “The Raven.”

Poe died at age 40 of unknown causes and all medical records of his death have mysteriously disappeared, including his death certificate, so it is anybody’s guess what brought his life to such an early end. But it seems that even in death, he left us with a mystery.

Sadly, the body mics of the Green Valley theater often muddle the sound, so while there is no problem hearing any of the performers, understanding them, especially when singing as a chorus, is too often difficult.

In all honesty, this is a show that would not be my cup of tea, yet I felt this production was surprisingly enjoyable — and can there be a better recommendation than that?
Posted by Bev Sykes at 1:31 PM