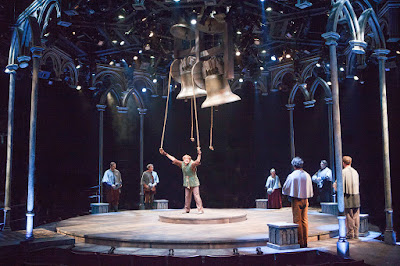 The Music Circus has saved the best for the last, closing its 66th season with the magnificent “The Hunchback of Notre Dame.” Music Circus is one of only three companies in the country that the Disney corporation has licensed to perform this work this season, and this production fulfills the faith Disney has in the Music Circus.

This musical, the only collaboration between Alan Menken (“The Little Mermaid” and “Beauty and the Beast”) and Stephen Schwartz (“Wicked” and “Pippin”), is a darker look at the Victor Hugo classic.

The book by Peter Parnell follows the story, set in 15th-century Paris, more closely than did the lighter Disney cartoon (and thus it may not be suitable for younger children). Some songs in this production are from the film, though others are from a 1999 German incarnation, and a few are new.
It’s difficult to know where to begin. Perhaps with the sumptuous set by Stephen Gifford, who created a magnificent bell tower, and an interior of Notre Dame Cathedral, complete with elegant rose windows, difficult to accomplish in a theater in the round, but the scene is breathtaking. (Some of the special effects throughout the show were amazing.)

Maybe the ingenuity of the costumes of Marcy Froehlich, who turns actors into gargoyles and back into actors, when necessary.

Certainly a huge part of the magic of this production is due to the chorus, under the direction of Omari Tau, which fills the theater with marvelous Gregorian chants and other background music throughout the show. (Look closely and you may find Gia Battista, of the Davis Shakespeare Ensemble, in the group.)

The outstanding part of this excellent cast has got to be John McGinty in the role of Quasimodo, the misshapen hunchback, who has lived his entire life in the bell tower of Notre Dame Cathedral.
McGinty is a deaf actor, with extensive experience in deaf theater. He does speak, but he doesn’t sing, so Jim Hogan, a soloist with symphonic orchestras all over the world, blends in as one of the cathedral gargoyles, and, when needed, unobtrusively steps out to become Quasimodo’s voice for singing, and also for longer speaking sections while McGinty signs the words.

The two work together so seamlessly that they really perform as one person. Their first solo, “Heaven’s Light,” nearly brought down the house with wild applause.

As for McGinty, you will very quickly forget his deafness, so beautiful is his portrayal of the tortured Quasimodo. His final scene will tear your heart out.

But the plaudits don’t stop with McGinty and Hogan. The cast includes several top Broadway actors, led by Mark Jacoby (also a Music Circus favorite). Jacoby plays Dom Claude Frollo, who reluctantly takes in his brother’s deformed child on the brother’s death, but raises him in the bell tower, where he can’t be seen by others. Frollo is a grim disciplinarian and moralist who has his own weaknesses, as we discover when he finds himself attracted to the sensuous gypsy Esmeralda.

Lesli Margherita was last seen on the Music Circus as Aldonza in “Man of La Mancha.” Her Esmeralda oozes sexuality, but with a sharp edge to her. Yet she displays a tender side both in her love of Captain Phoebus (Eric Kunze) and her friendship with Quasimodo. She is able to see past his deformity and into his soul.

Kunze gives the Captain the typical bluster of a Disney oaf (think Gaston in “Beauty and the Beast”) but his character is softened by his attraction to and eventual love of Esmeralda (he’s a fast worker — he’s known her less than a day).

There is a scene at the top of the second act where Quasimodo, along with the gargoyles of Notre Dame, sing “Flight into Egypt” with the ghost of the decapitated St. Aphrodisius, who supposedly accompanied Mary and Joseph and the baby into Egypt to escape Pharaoh’s wrath (“For I kept safe and free, the holy family”). It is one of Quasimodo’s favorite stories, and the ghost is trying to encourage him to save Esmeralda, but the scene seems out of place.

“The Hunchback of Notre Dame” caps a successful season, which started with the frothy “Legally Blonde” — about as far from “Hunchback” as you can get. This shows the versatility the Music Circus, and its dedication to bringing both new and old musicals to the Sacramento area.

Whatever you do, do not miss this production. You’ll regret it if you do!
Posted by Bev Sykes at 1:41 PM