How to Use a Knife 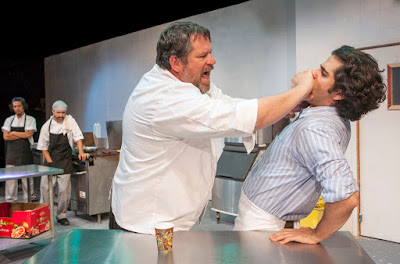 Playwright Will Snider spent three years working in agricultural development in East Africa. He also was influenced by the book “We Wish to Inform You that Tomorrow We Will be Killed with our Families,” about the Rwanda conflict of 1994.

Out of his experiences in Africa, and his time working in a busy restaurant in New York, has come a powerful — and surprisingly very funny — one-act play called “How to Use a Knife,” now playing at Capital Stage, directed by Michael Stevenson, as part of the National New Play Network Rolling World Premiere.

The set by Brian Harrower looks like the set of any Food Network show, with a very real-looking stove, prep area and a sink with running water.

Heading the excellent seven-member cast is Harry Harris as the larger-than-life George, a former top chef, who has fallen on hard times and is given the job of kitchen manager by his former student Michael (Kirk Blackinton).

Harris is a marvel — big and bold and brash. He’s a take-no-prisoners disciplinarian who is determined to whip his staff into shape and maybe make it back into his old life again. He strides the kitchen like a colossus, his colorful language peppering the orders he gives.

Blackinton’s character has risen above the dirty world of kitchen work. He just wants someone to take over for him so he is free to sniff his wines, smooth the lapels of his designer suits, and see which beautiful woman he can seduce. He feels both grateful to and respectful of George, sorry for the bad times on which his old mentor has fallen.

Comic relief is provided by the two Latino cooks, Carlos (Willem Long), who speaks English, and Miguel (Eduardo A. Esqueda) who doesn’t. They are quick to point out that they are not Mexican, but from Guatemala, a fact of which Michael is totally unaware and couldn’t care less. He also doesn’t have a clue about the name of his dishwasher Steve (Adrian Roberts) and thinks perhaps he is not able to speak, since he has never heard him talk.

Rounding out the kitchen crew is Jack, the busboy (Cole Winslow). Jack is a white boy who George assumes comes from privilege, because of his attitude. He is caught pouring leftover wine into a cup so he can drink it during the day and has a very laissez-faire attitude toward his job. Winslow is a member of Capital Stage’s 2016-17 apprentice program and comports himself well in this, his professional acting debut.

Long’s Carlos is just wonderful as the wise-cracking cook who is amazed to learn, after all this time, that Steve actually speaks.

As for Esqueda, he is making his professional theater debut and is a great foil for Carlos, always making comments in Spanish about what is going on so the two of them can have their own private jokes. He understands more than he lets on.

Dishwasher Steve is a tall, articulate, dignified man who is above the commotion of the kitchen. It is only when he and George are alone in the kitchen after work that he confesses his desire to learn how to be a chef. The two men each are harboring deeply painful memories and as their friendship deepens, Steve shares his experiences in Rwanda during the conflict of 1994.

Roberts gives much a dignity and depth to his character. George, moved by his friend’s confession, reveals the reason for his own descent into alcohol and drugs and his fall from grace. Steve confesses that George is the first friend he has had in a long time.

It is when Kim (Kelly Ogden), from INS comes around, asking questions about East African workers, that George’s eyes were opened about exactly what his friend’s life was like in Rwanda and the guilt he carries around with him. Ogden is crisp and businesslike with a heart as hard as steel.

As with Snider’s previous play, “Death of a Driver,” “How to Use a Knife” explores “the limits of understanding another person, and what happens when personal and political obligations collide.”
It is one of those plays that may inspire the audience to learn more about the Rwandan conflict and ask themselves what they would do in George’s shoes.

This play is not recommended for those sensitive to the F-word, though they would be missing an otherwise excellent and meaningful play.
Posted by Bev Sykes at 12:56 AM

Labels: Capital Stage, How to Use a Knife