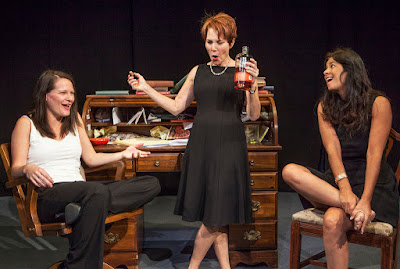 Someone spills a casserole, someone drops a luncheon plate, others spill the beans. Many times. This very dark comedy about a warring Oklahoma family makes George and Martha (“Who’s Afraid of Virginia Woolf”) look like they just had a little spat

There is a reason why this play won every major theatrical award when it opened on Broadway — including the Pulitzer Prize for drama — and why the notoriously cantankerous Charles Isherwood of The New York Times called it “without qualification, the most exciting new American play Broadway has seen in years.”

Director Ismail has the cream of the crop for a cast, starting with the always wonderful Janis Stevens as Violet Weston, the pill-popping matriarch of a dysfunctional family who have gathered together because father Beverly Weston (Rich Hebert) has disappeared.

It is a shame that Hebert’s role as the grizzled, depressed, bourbon-guzzling former-professor-now-wannabe-poet is so small because his performance is stellar and makes you want more.

The Westons have three daughters: Barbara (Amy Resnick), Ivy (Taylor Burris) and Karen (Dena Martinez). Barbara and Karen have gone off and made a life for themselves, leaving the unmarried Ivy to stay home and take care of their aging parents. Her mother is particularly cruel to her, taunting her for her appearance and pushing her to put on make-up, dress up, get out and find herself a man.

Burris walks the line between wimp who has endured her mother’s verbal abuse all of her life, and a woman hiding a secret that may make her the strongest of all the Weston girls.

Barbara arrives with husband Bill (Rick Eldridge), from whom she is separated (one of the secrets spilled fairly early in the play) and 14-year-old daughter Jean (Jessica Brooks). While Brooks seems older than 14, she is able to play the stereotypical ornery and hormone-driven teenager to perfection.

Martinez is Karen, the flighty daughter, who hasn’t been home in a very long time, not even when her mother was diagnosed with cancer. She arrives in time for her father’s funeral, but is more excited about her life, her fiancé Steve (William Glasser) and their approaching nuptials as well as her dream honeymoon in Belize.

Jamie Jones is the perfect choice for Violet’s sister, Mattie Fae, whose husband Charlie (Harvey T. Jordan) worshipped his brother-in-law and is having a difficult time adjusting to his new role as family patriarch.
Their son, Little Charles, as played by Justin D. Muñoz, seems to have limited intelligence and is painfully shy, but is hiding a secret that will change lives.

Chiitaanibah Johnson plays Johnna, a Native American whom Beverly hires before his death to help care for his wife. Sadly, Johnson is the only member of the cast who has projection problems. Her early scenes, played very close to where I was sitting, were impossible to understand because she spoke so softly. Since she has a major impact on the family, it is good that she has few actual lines.

The cast is rounded out by Tim Church as Sheriff Dean Gibeau, all grown up now, but formerly Barbara’s high school prom date. Will sparks fly at their reunion?

The set, designed by Jonathan Williams, is huge, complicated and mobile. Rooms move in and out, allowing stage hands to change one scene unobtrusively while another is played out on another part of the stage.

This play is full of drinking, pill-popping, dope-smoking, cursing, infidelity, incest, lechery, suicide and one good slugfest, yet you feel invested in these people and care about them. Ismail’s direction honors Letts’ script and this is a gem of a production.

Best of all, after spending three hours with the Westons, your own family won’t seem quite so irritating when gathered around the Thanksgiving dinner table!
Posted by Bev Sykes at 5:07 PM