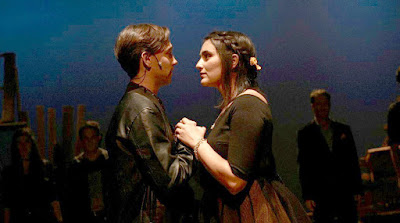 The final production of the Davis Shakespeare Ensemble’s 2016 Shakespeare Festival is the beloved “Romeo and Juliet,” the show that launched the company in 2011. As with the two previous productions, “Cyrano de Bergerac” and “Bells are Ringing,” this production continues the level of excellence that we have come to expect from this company.

Director Rob Salas explains that the company decided to look to the ancient practice of forming a story circle, and so there is a blank stage with chairs in a semi-circle with some random wooden pieces stacked in back and the one necessary set piece — a rough-hewn balcony off to the side. As each scene ends, the players take their seats again and the next players come up to do the next scene.

The device is surprisingly effective — and works especially well during the sword fights (choreographed by Sydney Schwindt), where the men have the entire stage at their disposal and look quite professional wielding their swords and daggers.

It’s a dream cast. Gabby Battista is a beautiful Juliet, whose face registers every emotion she feels, especially as she tries to balance her grief over the slaying of cousin Tybalt and the banishment of her secret husband, Romeo. She’s both delicate and strong at the same time.

Kyle Stoner’s Romeo is a bundle of pubertal energy, raging hormones first for the lovely Rosaline, and then instant switch to the lovelier Juliet. (It always amazes me that these two young teenagers meet, fall in love, marry and die within two days!) Stoner’s emotions are full out, whether expressing his love of Juliet or his despair at learning he has been banished from Verona.

Even if the rest of the cast weren’t excellent (and they are), this show would be worth seeing if only for the performance of Gail Dartez as Juliet’s nurse. Everyone should have a devoted servant like this. She can be very funny, or very emotional, first keeping Juliet’s secret, and then discovering her supposedly dead body. She is Juliet’s best friend and confidante and brings comic relief to the story with her often inappropriate and long-winded comments..

The Hatfield-McCoy-like warring families are led by Tim Gaffaney (Capulet) and Will Oberholtzer (Montague). Oberholtzer also plays Friar Laurence, a meatier role than that of Juliet’s father, as he hopes that by secretly marrying the two lovers, he can bring peace to the Capulet and Montague families.

Lisa Halko, a grandmother in real life, so the oldest in the cast, is a marvelous Lady Capulet. She doesn’t quite know how to be a mother to the daughter she entrusted to a wet-nurse at birth, but she is very interested in the match her husband has arranged with Paris, a kinsman of the prince.

Kevin Gish as Paris at first seems a good match for Juliet , but his imperious and demanding attitude quickly shows his true character and you can easily see that she will become an abused wife if the marriage takes place.

Costumes for this production are by Caitlin Cisek and Karly Goodwin. With all that black leather, it looks like they bounced right out of “West Side Story,” and it is both sinister and regal, sometimes simultaneously.

The plan for this play by Davis Shakespeare Ensemble is to make the production accessible to high school students, so they are making it a field trip destination for many schools all over Yolo and Sacramento counties.

The appeal to a younger audience is the only excuse I can find for the abominable background “music” you might call it. The pre-show “music” was so loud and ear-shattering that it gave me a headache, but the single-note fuzzy synthesizer background, sometimes with added ominous unintelligible voices, was so irritating it nearly spoiled this otherwise wonderful production.

I hoped for relief at intermission, but it continued all through intermission as well. I guess it was supposed to keep the gloomy mood going. I checked with people around me, all of whom were in my age range. One woman didn’t mind it, but everyone else hated it. I don’t know if the fault is with sound designer Adam Smith or if the decision was made by someone else and simply executed by Smith, but whatever, it is not something that is likely to appeal to the over-50 crowd.

Were it not for the music, or whatever it was, this production would receive an A-plus.
Posted by Bev Sykes at 5:51 PM