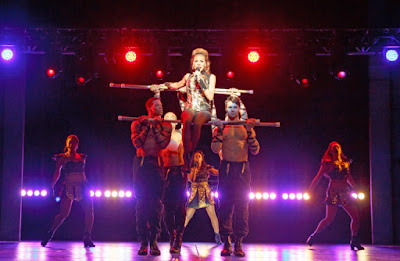 I never saw the 1992 movie, “The Bodyguard,” so in preparation for seeing the musical version now at the Sacramento Community Center Theater, I rented it. I was unimpressed, and did not have high expectations for the stage show.

I was very happy to have my fears erased. From the explosive first couple of minutes, guaranteed to wake the sleepiest of snoozers, the plot of this musical, while staying true to the film, takes a back seat to the musical numbers, a tribute to Whitney Houston without attempting to imitate her.

This is a good thing, because while Houston was undeniably a wonderful singer, the same was not true for her acting. Deborah Cox, who plays Rachel Marron, the superstar whose life is being threatened, is a fabulous singer and a much better actress than Houston. Songs throughout the evening are sometimes gratuitous, but often are part of a concert Rachel is giving.

Rachel is threatened by a stalker who sends ominous letters and then sneaks into her dressing room and steals a dress. Manager Bill Devaney (Charles Gray) hires former Secret Service agent Frank Farmer (Judson Mills) as Rachel’s personal bodyguard. Frank reluctantly agrees to take the job when he learns of Rachel’s young son, though he has no interest in celebrities.

Mills, who is fierce and stoic, is a former regular on the TV show “Walker, Texas Ranger” and also appeared in such TV shows as “Law and Order SVU,” “The X-Files” and “Dexter.” He is perfect for the emotionally detached Frank — and, fortunately, does not sing.

The role of Rachel’s sister, Nicki, has been expanded and actress Jasmin Richardson has some musical numbers of her own. She is easily equal to Cox in quality (and is, in fact, Cox’s understudy), giving the audience an abundance of talent to enjoy.

But the real scene stealer is young Douglas Baldeo (who alternates in the role with Kevelin B. Jones III) in the role of Rachel’s 10-year-old son, Fletcher. A rendition of “Jesus Loves Me,” which features Fletcher with his mother and aunt, is a sweet moment in the show.

It is the music that keeps this otherwise pedestrian plot moving forward, but there are some eyebrow-raising scenes that grate. Frank, who is such a stickler for security, not only takes Rachel to a karaoke bar without back-up, but even encourages her to sing.

And as it is hate at first sight between Rachel and Frank, it is strange to find the two in bed together after the ruckus that erupts at the bar.

It also seems strange that he would whisk the family away to a deserted cabin in the woods and not realize that they are being followed by the attacker. Such carelessness may explain why he is a former Secret Service agent.

The shocking confession in the movie is not in this musical and the identity of the attacker is also different, and known by the audience since the start of the show.

The show has its problems, but overall it is enjoyable. And for Whitney Houston fans, it’s a chance to revel in more than a dozen of her famous songs.