The Donner Party: The Musical 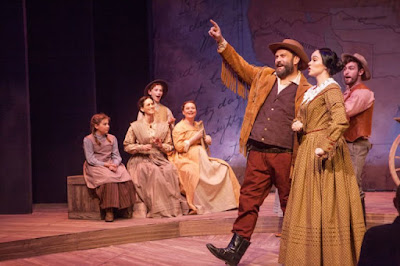 Just a short distance from Sutter’s Fort, the final destination of the 80-something settlers who started out from Missouri, intending to settle in California, Sacramento Theatre Company is premiering the musical “The Donner Party.”

The new American musical is by Eric Rockwell (music) and Margaret Rose (book and lyrics). The production is directed by Rose and Michael Laun, who have assembled the cream of the crop for the cast.

There is beautiful music in this saga. There is poignancy. There is humor. And there is deep sadness.
What there is not is consistency of tone. At times, with the crusty old grandma on her deathbed, looking for all the world like Ma Joad (Martha Omiyo Kight), it feels like “Grapes of Wrath” while with each “anthem” number (for want of a better word), it seems like something out of “Les Miserables.”

Then there are the “aren’t we having fun on this adventure” numbers, which could be from any musical comedy Western. What it desperately needs is to be unique and not derivative.

That said, this is definitely a must-see, if only for the wealth of talent and for the wonderfully stirring numbers like “Wagons Roll,” which comes early in Act 1 and caused me to whisper “wow!” to myself. It is followed by many (too many, at 19) numbers that are blockbusters, but too many that drag down the forward motion of the story.

A real plus for the show is the live five-piece band playing behind a screen on the stage, under the direction of Samuel Clein.

The Donner Party was led by two families, the Reeds (Michael RJ Campbell and Vivienne Cleary) and the Donners (Jerry Lee and Maggie Hollinbeck). The Reeds, including their four children, all made it to Sacramento, while both George and Tamsen Donner died while their five children survived.

Campbell and Lee are heroic characters who are obvious leaders whose voices boom out over the theater and make this a real experience.

Wives Cleary and Hollinbeck are less bombastic, but perhaps create more well-rounded characters and are the glue that hold their families together.

The children from STC’s Young Professionals are each wonderful, but I must single out Noa Solorio, who alternates in the role of Virginia Reed with Monique Ward Lonergan, as particularly good. She does not take a back seat to anyone.

Cat Yates is the pregnant Peggy Breen, carrying her bairn around for most of Act 1, but a plucky gal who is going to make it no matter what. (And records show that not only she but also her newborn managed to make it to Sacramento.)

The quartet of women — Tamsen Donner, Margaret Reed, Peggy Breen and Mary Ann Graves (Abbey Williams-Campbell) — provide a brief light moment with “He’s the Man I Chose,” laughing about the idiosyncracies of their respected spouses.

Graves has no spouse, but has fallen in love with Charlie Stanton (Sam C. Jones), who dies before they reach the Sierra.

As Act 1 ends, the group is realizing that they have started too late and they are going to be stuck until the snow stops — which is not until the spring thaw. The audience knows there isn’t going to be much levity in Act 2, but there are a lot (five) of reprises from Act 1.

Yes, the subject of cannibalism is handled tactfully (though apparently, recent excavations put that whole issue into question, as no human bones have been identified), but it is not a major part of the story.

I really want this show to be wonderful, and I think it has the possibility to be. I would love to see it go back to the drawing board to be tightened up and presented again in a couple of years.

I have no complaints about any of the performances, and I’d be willing to bet that many people who have seen the show have been googling the Donner Party to get more information about each of the characters they came to know during this show. Eighty-three started out on this tragic journey; 45 made it all the way.