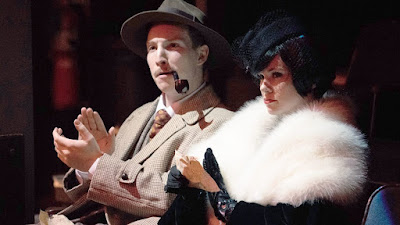 There is only one way to describe John Buchan’s “The 39 Steps,” now at Wyatt Pavilion — silly, frenetic madness and mayhem.

This Patrick Barlow homage to the 1935 Alfred Hitchcock film is based on a John Buchan novel. Described by UCD’s department of theater and dance as “a Hitchcock masterpiece with an action thriller, adding a dash of Monty Python,” this production, directed by Mindy Cooper, will have you gasping for breath between the laughs.

The production also celebrates the 110th anniversary of Wyatt Pavilion, the oldest building on campus.

It is a cast of five — Matt Skinner, Kelly Tappan, Daniel Ferrer, Matthew Murphy and Caitlin Sales — who create more than 100 characters, with lightning-fast costume changes, most in full sight of the audience. One actor may change character three times in a matter of seconds.

The only actor who does not change character is Skinner. He appears as the uber-British Richard Hanny, whose brief encounter with a glamorous woman he meets in the theater (Tappan — like Hitchcock leading ladies, she is a striking blonde) leads to numerous adventures that involve chases across moors, streams and bridges, false identities, and even murder (for which he is, of course, falsely accused).

Poor Hanny will be chased through two dozen locations before the play comes to its end.

The parade of police, spies, rustics, traveling salesmen, innkeepers, newsboys and railroad porters are all played by Ferrer, Murphy and Sales, who did not make a visible misstep despite the zaniness of the action. Watching them change hats, coats and accents is as much fun as watching the people they become.

The creative team of Duke Durfee (scenic design), Pamila Z. Gray (lighting design) and Lindsay Putnam (sound design) create great effects, such as a tribute to Hitchcock’s “North by Northwest” when Hanny is chased by a crop duster.

(To the best of my knowledge, director Cooper did not, like Hitchcock, have a brief walk-on, but who can tell with all those characters?)

The innovative use of things — like ladders to represent the Forth Bridge, or big photo frames that double as windows through which characters escape — is brilliant.

The pace is breathtaking and the laughs tumble over each other throughout.

Be advised that if you have difficult reading small print, bringing a magnifying glass is advised. The print in the program is so incredibly tiny that I was not able to read it until I got home and could see it under a magnifying glass.