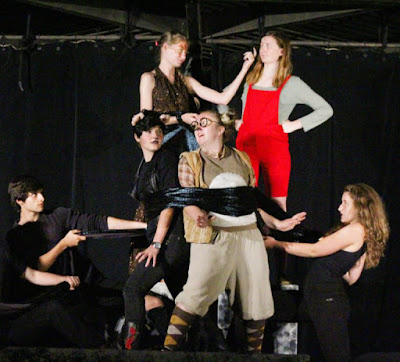 Panthers, tigers and bears! Oh my!

It’s a jungle out there, as Acme Theatre Company presents its annual thank-you gift to the city of Davis on the Art Center amphitheater stage in the form of a free performance of Rudyard Kipling’s “Jungle Book,” as written by Acme alum Briandaniel Oglesby and directed by Emily Henderson.
Kipling’s 1894 book was a collection of fables using animals to give moral lessons, and Oglesby gives the story a modern ecological twist.

This version of the story was commissioned by Big Idea Theatre in Sacramento and opened its 2014 season.

The first thing to observe on the Art Center stage is the set, designed by Benton Harshaw, an innovative use of umbrellas of all sizes, shapes and types, painted in various shades of green and grouped together to form the jungle in which the action takes place.

Costumes designed by Cassaundra Wages are fairly minimal suggestions of costumes — ears and a tail, for example, but the most fun costume of all is for the vulture, Kite (Sophia Waxman) whose voluminous wings allow her to fly all over the stage area and Waxman has perfected the art of swooping and settling, quite vulture-like, on a tree stump.

It is the story of the young boy Mowgli (Gracelyn Watkins), orphaned after his parents were killed by the hungry tiger Shere Kahn (Dedrick Underwood). Mowgli is a puzzlement to the creatures of the forest and there is discussion concerning what to do about him until he is adopted by Raksha (Garnet Phinney), a wolf mother who recently lost her cub. She will raise the boy as her son and teach him to be a wolf.

Mowgli joins the pack of wolves, led by Akela (Ben Kimmel) and learns the ways of the forest, though he never quite “belongs,” and is taunted by his fellow wolf cubs. He is the perpetual outsider just looking for a home.

The story is told by the bear Baloo (Cassidy Smith) and his panther partner Bagheera (Cory McCutcheon), who take on the instruction of the young man-cub. Baloo explains that he is “tasked with the edification of the wolf pack. I teach them jungle law and the stories of us Jungle People.”
In his search for a place to belong, Mowgli briefly joins a pack of monkeys but is fascinated by the dangerous snake Kaa (Laura Britt). To escape, Mowgli flees to the nearby city.

The pace of life in the city, with everyone rushing by, is confusing to the young man-cub and when he is discovered by the humans, they, too, are confused by what to do with him, suggestions which include everything from experimenting on him to locking him up in a zoo.

But he is adopted by a wealthy socialite, DeeDee (McKella von Boxtel), who is determined to civilize him. (Husband Duke is played by Underwood, previously seen in the jungle as tiger Shere Kahn.

(In one of the more clever bits of set design, DeeDee’s home is decorated with paintings, represented by cast members looking through picture frames.)

Still finding himself an outsider, Mowgli can’t find a home with his own kind and decides to return to the forest, but in the years of his absence, the forest has been transformed by clear cutting and his old friends are losing their home.

The play ends on Mowgli’s solution for saving his friends and finding a new place away from the destruction of the forest.

This is a play that will delight children of all ages (I sat next to a toddler who was mesmerized throughout). What better way to spend a couple of hours on a holiday weekend than outside enjoying a delightful play?